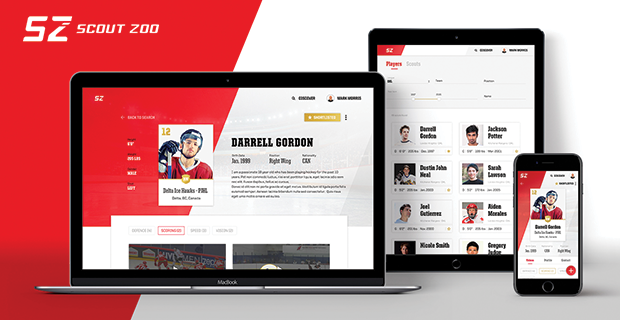 Online Platform Aims to Revolutionize the Way Players Get Scouted

We’ve shone a spotlight on plenty of gear in our HockeyNow: CRAVE series (which we’re bringing back this month after a long hiatus), and although we plan to do the same, we thought it was high time that we look at some new technology, and an app that has huge potential to change the way scouts, recruiters and players connect.

Scout Zoo, which just launched last month, is a web platform that allows players to market their own talents online, and gives scouts and recruiters the ability to see countless players in action at their leisure.

We spoke to Scout Zoo founder Jadan Claire, who said it was his own hockey upbringing that inspired him to start the company.

“My experience growing up and playing hockey and not being able to get that extra level of exposure is what motivated me,” he explained. “We relied on scouts watching us in playoffs and tournaments only.”

So how does it work?

In short, Scout Zoo is a platform where athletes can post videos and where recruiters can view reels and then connect with players. Players can upload videos, tag them with the skills they’re highlighting, and even add a spotlight within the video that follows them on the ice. Once videos are up, players get a notification any time their profile is viewed by a scout or a recruiter – which in itself could be an attractive feature to players hoping to get noticed.

“The traditional way [for players to reach out to recruiters] was to send a dvd off to a team or school,” Claire explains. “Well, how did you know if it got there or if anyone was even watching it? This replaces the struggle.”

Of course, this may all be a little too simple for some and even Claire acknowledges that the platform isn’t for everyone. But there’s no question that the next generation of players and scouts is more tech savvy than ever. Plus, we’re able to record high quality video on our phones, which with an app like Scout Zoo, could be shared right away.

The platform should definitely appeal to recruiters scouting internationally – and the company does in fact hope to find success in the European market, where, as we all know, many North American players are able to extend their careers.

Another cool feature in the works are player evaluations, where players can get unbiased professional reports from NHL scouts on areas of strength and improvement based on review of their videos. Pro scout Mike Penny is leading the charge on this initiative which will be launched soon.

For now, Claire says the company is focused on getting as many players and recruiters into the system as they can and offer a user experience like none other.

Only time will tell if Scout Zoo becomes the new norm. The potential is definitely there and we’ll be keeping our eye on this one for sure.

To find out more or sign up for free, visit scoutzoo.com.