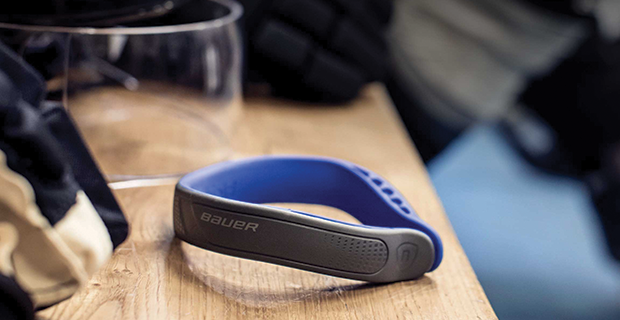 The Wright brothers spent a great deal of time observing birds in flight. They noticed that the creatures soared into the wind and that the air flowing over the curved surface of their wings created lift.

That observation along with other in depth research led to the invention of the airplane.

Now Bauer has launched the NeuroShield which is a collar worn around the neck that applies light pressure to “mildly increases blood volume in the venous structures around the brain,” helping to reduce the organ's movement inside the skull. (Bauer)

Research has shown that it’s the "sloshing" of the brain inside the skull caused by a blow to the head that often leads to damage to the delicate microstructures of the brain, including nerve fibres as well as concussions.

The technology behind this new product was discovered by Dr. David Smith who researched the woodpecker’s ability to withstand millions of high-energy impacts over their lifetimes without suffering brain damage.

The reason is that the bird's anatomy doesn't allow its brain to move within its skull.

Former NHL player and Bauer spokesman Mark Messier stated that, “I hope the device will allow kids to remain engaged in sports and keep athletes of all ages and abilities safe from accumulated injuries to the brain.

"I think that's the beauty of this product. It really can envelope that many different levels of players. Seeing a medical device that enters into the protection and the safety aspect is very encouraging.”

A word of advice and caution though, NeuroShield does not prevent concussions. It is designed to complement and be compatible with equipment typically worn during play, including neck guards, shoulder pads and helmets.

NeuroShield is available in eight sizes for children and adults aged seven and up, and will retail in Canada for $199-plus.

Bauer has created quite the buzz by launching a totally new piece of equipment – quite the feat in today’s saturated market. The company first introduced the NeuroShield in 2015, with plans to bring it to shelves in the next couple years following sufficient research – and that’s just what they’ve done. Time will tell if the technology checks out but there’s no question Bauer is setting their sights on an area that needs attention.