The New Age of Hockey Training and Development 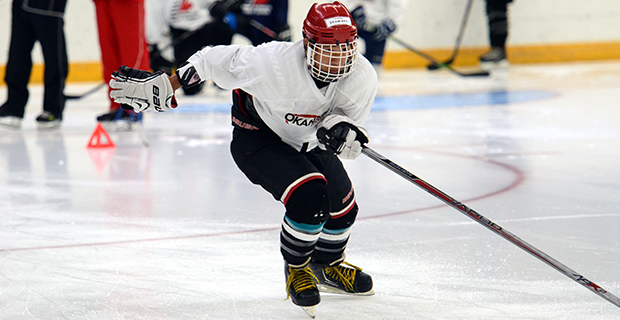 In a world of latest and greatest at every turn, how do developing hockey players weed out the necessary from the extraneous when it comes to training? Here, we look at emerging trends in development and technology, what’s here to stay and what's going by the wayside.

Hockey is in a state of constant evolution.

From technological advancements to the shifting focus onto specific areas of the game, players, coaches and trainers alike have been finding new ways to adapt to the ever-changing environment, both on and off the ice.

“It’s all about information and efficiency. Those are the biggest things,” said Okanagan Hockey Schools vice president Dixon Ward. “There’s a whole bunch of different facets. Obviously video technology and the teaching process has really taken things to a whole new level. Technology in off-ice training modules — whether it’s equipment or testing technology, measurement technology — those things have changed in the way we approach off-ice training.”

The profusion of hockey schools and trainers has become the norm in recent years, with many of the Canadian Hockey League’s top prospects coming out of academies. And one area many academies and training facilities have been narrowing their focus upon is small-area skills training. With the increasing speed of the game, players are left with far less time and space and must be able to work within close quarters in order to succeed at the highest levels of hockey.

“Everybody is doing small area training. It’s obviously the future of hockey development,” said Power Edge Pro vice president and skills trainer Joe Quinn. “You have to have small space skills, you’ve got to be dominant in small spaces. It’s going to be hard for you to play the game the way it is today if you don’t have those kind of skills.”

Quinn added most on-ice training has shifted its focus onto overloading the skillset. Today’s game demands players to execute multiple skills simultaneously, which has led to an increase in small-area skills and reactive training. The ability to do things like stickhandle through traffic while being aware of the action on the surrounding ice and facilitating the play demands a lot from the mind, and like all other skills, it requires training and repetition.

“If it’s not overloading the motor skills then I’m not interested,” said Quinn.

Quinn is no stranger to peak performance. The longtime trainer has been working alongside Edmonton Oilers captain Connor McDavid for nearly a decade and says it’s truly been a privilege to work with a generational talent.

“I’ve watched him grow up on the ice since he was 11 years old and I’m training him now at 20 years old,” said Quinn. “It’s been a great experience.”

While most of the game’s fundamental teachings remain just that, there are still the odd methods that have gone by the wayside. And there’s one drill in particular Quinn says can arguably be more detrimental than beneficial to a hockey player’s development.

“I haven’t power skated without pucks for 15 or 20 years. If I’ve got a young player who’s learning to skate I’m going to get him into figure skating, I’m going to get him into technical skating and power skating without pucks, but after that, that’s it,” said Quinn. “You’re not going back to 40-year-old training with pylons. That doesn’t create any kind of a challenge for the players, there’s no resistance. For me, any player that’s past learn-to-skate, I think you’re building bad habits if you’re power skating without pucks.”

Technology has played a big hand in shifting hockey training through the last decade.  While not all teams have access to hockey’s highest levels of technology, a handful have been benefitting from a few fancy new tools this season. 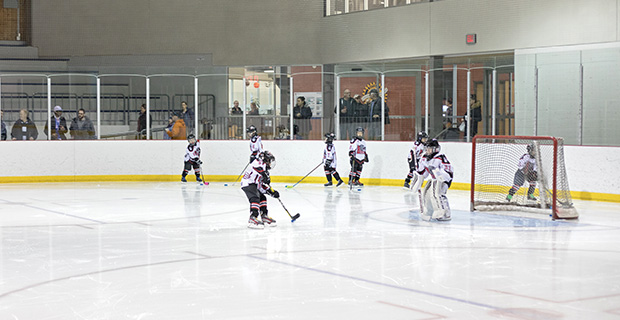 The Medicine Hat Tigers recently installed an 82-inch smart board telestrator in their dressing room, which allows coaches and players to utilize a number of new tools such as an on-screen whiteboard while reviewing video.

Tigers assistant coach Bobby Fox added the telestrator is the same model used by the Edmonton Oilers, and is essentially a massive computer that not only allows new options, but streamlines the classics as well.

“It’s relatively new to us, so there’s a learning curve for the coaches but we’re getting the hang of it. I’m not sure how it’s translated on the ice yet, it’s still too small of a sample size — but I think the key is that we want to give all these players learning tools that we think can help them the most,” said Fox. “All these guys are visual learners, so when we can pause and stop video and draw right on the screen versus a two-dimensional rink board, it accelerates the learning a little bit. It just allows us to give them quick feedback with game video. It’s definitely a lot less work than the old way where you put lines in videos and stuff. That’s time consuming, this is instant feedback.”

That ease of access and instant feedback has been spurring development among young players across North America. In 2014, Okanagan Hockey Schools and the Western Hockey League joined forces to create a database for aspiring prospects as well as team scouts across the league.

The WHL Prospect Combines initiative allows hopeful major junior players to test themselves across a variety of frameworks and compare their results to those of different players, age groups and levels of competition. The program has given more than 7,000 players and teams a framework of data that can be used as a developmental tool, a comparative device and an indicator of future potential. 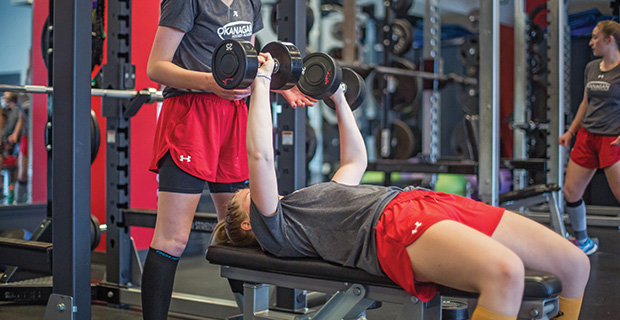 Canadian sports schools pride themselves on being on the cutting edge of training and development, and Okanagan Hockey Academy is no exception. The school boasts leading edge training facilities, and has devoted a great deal of resources to developing training protocols that allow their students athletes to effectively measure their progress. (Courtesy of Okanagan Hockey Academy)

“That’s the biggest thing that we’ve seen over the last couple years since developing these training protocols — they serve a couple purposes. One purpose is to have a comparative analysis from one player to another group of players, or age group or league level,” said Ward. “But for us, more importantly we can use them as developmental tools to give us real numbers and real analysis on where certain age groups are weak, the physical process they need to focus upon and what areas we’re improving upon as we go through multiple tests to see if the training programs are effective.”

Ward added the instant access to information also allows players and their trainers to maximize their training time, and hone in on the areas that require the most attention.

“There’s instant access for people to do research and develop, basically for any athlete who wants to access it,” said Ward. “It’s given us a lot more data and information to make proper training decisions.”

The options are nearly endless. But as Ward points out, every tool available requires the trainers and players using them to put in the effort and dedication necessary to achieve success. 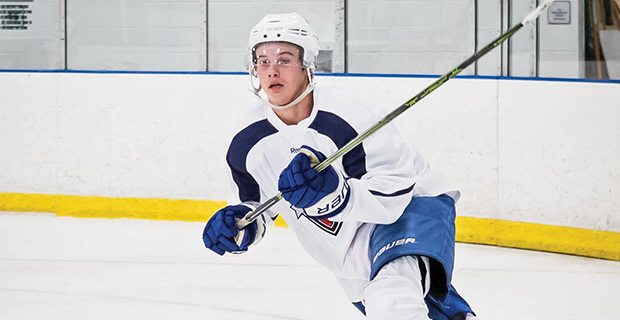 Hockey training is in a constant state of evolution, and trainers need to stay two steps ahead of the curve to keep players in peak playing condition.

What's #trending in Hockey Training
with Steve Serdachny
Hockey has changed considerably over the past few decades. While the core concepts and developmental demands remain the same, the skills required to thrive at hockey’s highest levels have evolved with the state of the game. Here are some trending methodologies NHL skating and skills coach Steve Serdachny of Serdachny Hockey says are of the utmost importance for developing young players.

SMALL SPACE SKILLS
Being able to thrive under pressure and successfully execute split-second decisions has become one of the most important aspects of player development for many trainers and hockey schools.

“There’s only one puck on the ice,” said Serdachny. “The battles and confrontations and scenarios, they happen quite often along the wall or in small areas.”

EXPLOSIVE SPEED
One thing that separates Edmonton Oilers captain Connor McDavid from the rest of the league is his explosive speed, something many schools are stressing the importance of for junior players.

“Explosive speed is a very dynamic element in the game,” said Serdachny, founder of Serdachny Power Skating.  The game is getting faster and faster all the time so the emphasis on skating and speed development at all levels has become paramount to the professional player.”

ZONE-FOCUSED TRAINING
Serdachny describes hockey as “a series of battles in all three zones,” and each zone demands players utilize different skills in order to gain an edge.

ON-ICE & OFF-ICE INTEGRATION
Success on the ice requires a balance of on-ice practice and off-ice training, but Serdachny says integrating the approach of both training methodologies has become a growing trend in recent years, and with good reason.

“There are a lot of integrated programs now where you’re getting the best-of-the-best off-ice people building strong cores and building fit athletes and holistically training them,” said Serdachny. “Not just from an on-ice or off-ice perspective but more of an integrated approach with core strength, flexibility, explosiveness, power, foot speed and trying to integrate that with a good on-ice program.” 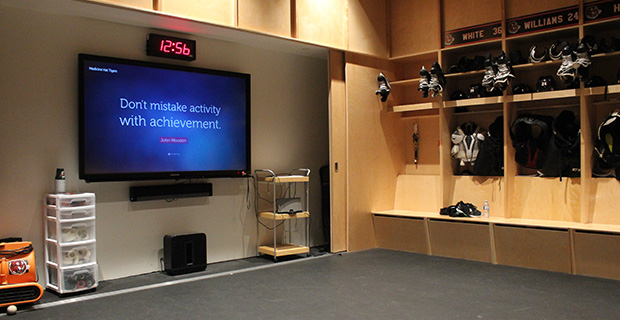 Getting Technical: Telestration
Telestration isn’t just for television anymore. The tool made famous by NFL commentator John Madden and vastly improved on over the years allows users to interact with layered videos to accomplish a wide array of training tasks. While their use isn’t quite widespread as of yet, the Medicine Hat Tigers have been benefitting from an 82-inch telestration screen in their new dressing room this season.

“It’s got a bunch of templates of hockey rinks, we can watch video on it and it’s a smart board too,” said Tigers captain Mark Rassell. “So we can draw it on while we’re watching video and make adjustments. It’s pretty exciting.”

“We can bring up a whiteboard, we can save and email things to the players, we can put up our statistics, it’s pretty much limitless,” added Medicine Hat Tigers assistant coach Bobby Fox.

Technology has worked its way onto the ice at the developmental level as well. The WHL Combines program run in partnership with Okanagan Hockey Schools utilizes a series of gadgets — created by Toronto-based company Sport Testing — when measuring, analyzing and projecting the Dub’s next wave of talent. Measurement technology such as electronic timing gates and identification wristbands coupled with a data management system allow players, trainers and scouts the ability to monitor progress and compare statistics across a variety of categories and age groups.