Strength Training Part 1: To Train or Not to Train, That is the Question 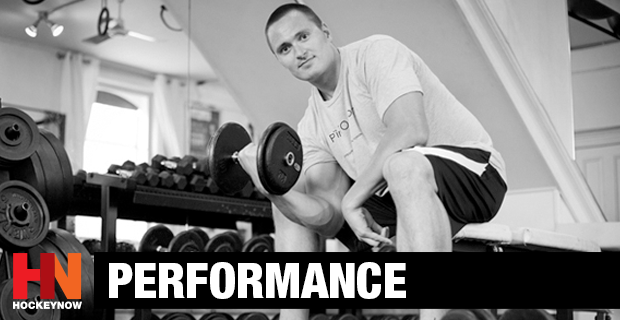 The guidance in this article is directed at parents, coaches and trainers of competitive 12 to 16-year-old hockey players.

To train or not to train, that is the question
The question I’m most often asked during the hockey season concerns strength training. Parents see their kids get outgrown and out-muscled on the ice and think that strength training is the answer. They are not wrong – being “tough on the puck” is much easier when you are big or strong, or both. Since you can’t accelerate natural growth, getting faster and stronger is the only other variable you can influence.

Given that, most parents and coaches are confused or amused by my response: “get more sleep instead.” The reality is that most players from Atom to Midget, playing at the competitive level are overtraining, which ends up having a negative effect on and off the ice. Overtraining contributes to fatigue, which directly affects attention span and muscle recovery. In most cases, adding strength training to a busy hockey schedule is just counterproductive. (Read more on the effects of fatigue in my sleep article on this site.)

What is strength?
Before we go into too much detail about strength training, let’s define strength as the ability to do work at a certain speed over a period of time. As your strength increases, your workload increases, your speed increases and your endurance increases.

Stronger is better
That doesn’t mean that I don’t believe in some form of strength training. Developing strength is needed to improve speed, power and endurance, as well as to prevent injury (Stronger muscles help stabilize joints of growing bodies and make the body more resistant to impact and repetitive strains). It’s just that it’s very challenging to effectively integrate strength training into a minor hockey program when you’re practicing or playing 5-6 days per week. Add that most of these young athletes engage in some form of dry-land training, trips to the ODR (outdoor rink) and physical activities at school, they are already over-committed.  Before the age of 12 (and checking) all efforts should be directed to developing hockey skills and speed, not strength.

Less is more
The key is to focus on quality not quantity when strength training. You always want to train hardest where you are weakest to maximize your gains. More specific strategies are covered later in this article. Note however, that conditioning is not the same as strength training. During the season, the majority of your conditioning – which includes developing strength and endurance – comes from on-ice practices that focus on developing strategy, individual skills and aerobic capacity. Games are where you put it all together and demonstrate your skill as a result of the marginal gains you achieved in multiple areas.

More can lead to less
Unfortunately, this is the reality for most competitive players in the 12 to 16 age group. They grind hard day in and day out, thinking that training more is better, but it’s not.  Overtraining extends recovery time and prevents them from performing at their peak. It’s hard to “train like you play” when you and your muscles are tired.

That’s why I tell competitive players in this age group to get more sleep, so they can recover faster and play at their peak more often. Strength will develop naturally as a player continues to practice and grow.

"But my players are losing weight! What gives?"
I hear this all the time and players shouldn’t worry, unless they are not getting enough protein throughout the day [1]. Too many players train like 99 per cent of the trainers in the gym – like bodybuilders. They are developing big muscles that are shorter and reduce rage of motion. Training this way will lead to “rounder” muscles, which is why so many people do it, but it’s otherwise useless for hockey players. That’s why when players get back on the ice and re-train their “hockey muscles” to be long, fast and lean, the less functional muscles do not get trained and atrophy. It’s a classic case of use it or lose it. Again, players need to train smarter not harder.

When to develop strength?
Based on my experience over the last five years, the best time for a competitive player to focus on strength training is in the offseason, immediately following a recovery period where they do nothing but eat, sleep, recover and grow. This rest and recovery period will differ for boys, girls, age group and team based on their schedule and physiology.

If injuries are a factor, your recovery period will lengthen even more. The minimum period I recommend is two weeks, but a month isn’t too long. If your hockey season ends in February or March and tryouts are in late August, you have five months to get ready. Develop a plan and stick to it.

[1] One gram of lean protein is recommended for each pound of body weight but distributed throughout the day, with an emphasis on breakfast and the pre-sleep snack.