Goalie Parents: Be A Cheerleader Not a Spectacle 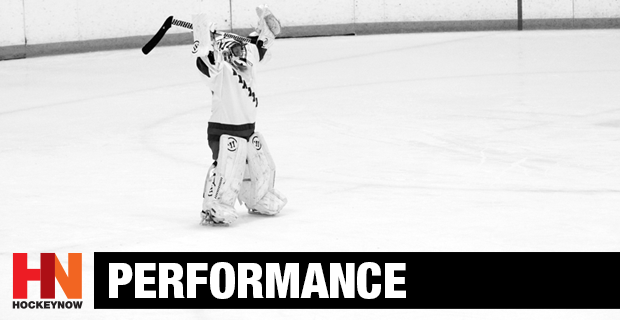 Support your children in sports. They feed off this and want to know you are there for them; they crave your approval and support. They do not want to feel embarrassed or responsible for your actions.

While your kids love you and want your approval, they should not be looking for it in the stands during the game  – yes, stoppages for whistles and end of periods are still ‘in the game’.

I agree, the little Tyke’s looking up for mom and dad are adorable, but once we get into “real” games, kids should learn focus and not to look for mom and dad during the game. Don’t expect a big smile or eye contact after every save or play and encourage them not to do this, but to focus on the task at hand – the game.

Goaltending is a very cerebral position. It requires a lot of mental conditioning, focus and preparation. Even the best pros lose focus, can you imagine how hard it is for a child who already has a short attention span to try and focus on the entire game, the puck, the players, the coaches AND mom & dad screaming like lunatics from the stands.

The worst case of this I have ever seen was early in the season at a competitive nine to 10-year-old game and the goalie’s dad (it was obvious later) screaming at the top of his lungs while standing behind the opposition goalie – right against the glass. I heard him from the lobby. The kids, parents and even the refs were looking at him. He had become a spectacle!

I witnessed this guy scream obscenities at the opposition goalie, the team, the refs, etc. He punched the glass and pounded the boards every time something ­–or even nothing happened.

Then the teams changed ends and his son was at the same end as dad. He carried on in exactly the same manner, except cheering and yelling at his own son every time the play even came near, berating him for what he considered bad saves and technique.

The teams were tied with about 3 minutes to play and the dad was getting crazier as time ran down. Oh yes, this was just the first month of the season, obviously there was nothing in this man's life more important that winning this game –sorry, having his son win the game.

There was a shot on goal and the young goalie let out a rebound, not unexpected for this age (it was a good save), but the dad was upset that there was a rebound and began screaming at his son for not controlling the puck. He was jumping, yelling flailing around and suddenly he took a full swing at the glass and pounded it, while screaming louder than any other time, which was hard to imagine.

This startled everyone, the players on the ice on both teams stopped for a moment to look, the refs looked and his son lost his focus on the play, stood up, turned around and threw his hands in the air while staring straight at his crazed father just as the opposition player shot the puck into the unguarded net.

They lost the game by that vary goal and the father was nowhere to be seen. Be a Cheerleader, support your child, but do not become a spectacle or a distraction to your child.

The other team is off limits, your own players are off limits, no comments should ever be directed at children playing a game – the ref’s and coaches are also off limits.

However hard this may be, you can’t be screaming at these folks during a game, or after.Watch the game, enjoy the game, be happy, be quiet, cheer your child's accomplishments, but do it respectfully of all participants, including the other fans, coaches and ref’s. And above all, for the sake of your goaltender, do not coach them from the stands.

This is not your job, it is distracting and embarrassing to the child, disrespectful to the coaches and just plain annoying to everyone. IT WILL NOT HELP IN ANY WAY.

Seriously, it won’t do any good so don’t do it.