Concussions in Sport: What You Need to Know 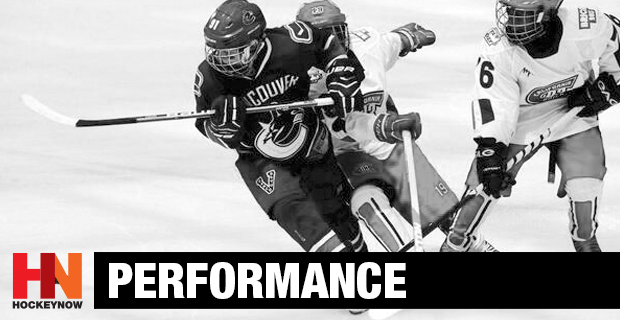 It goes without saying that concussions are a hot button issue in major sports. Sidney Crosby’s struggles with concussions have been a topic of conversation among hockey analysts for several years now. Since January 1, 2011, Crosby was injured in 5 separate incidents that resulted in concussion-like symptoms. His injuries caused him to miss several games, and cast doubt on his longevity in the game.

Sidney Crosby is only one of many players who have experienced how dramatic the effects of concussion can be. Fortunately for players in the NHL, they have a medical staff to assist with returning to hockey (and everyday life) following concussion injuries.

But for many recreational hockey players and players in junior leagues, this is not the case. So what options are available to these players to try to reduce the impact of concussions? A good place to start is simple awareness of what concussions are and what to look out for. Here are a few important items to consider.

What is a concussion?
A concussion is a brain injury that is not likely to show up on conventional medical imaging (e.g., X-ray, MRI), and affects a person in a variety of ways (see below).

What causes a concussion?
Any impact to the head, face, neck or elsewhere to the body that results in a jarring of the head may cause a concussion.

What are the signs and symptoms of concussion?
Any of the following can be present when a concussion has occurred:
- Headache or pressure in the head
- Dizziness
- Nausea or vomiting
- Blurred or fuzzy vision
- Light or sound sensitivity
- Balance issues
- Feeling tired or having no energy
- Not thinking clearly
- Feel slowed down
- Easily upset or agitated
- Sadness
- Nervous or anxious
- More emotional
- Sleeping more or less
- Hard time falling asleep
- Difficulty working on a computer
- Difficulty reading
- Difficulty learning new information

What are the visual signs of concussion?
- Lying motionless on the playing surface
- Slow to get up after a hit to head
- Disorientation or confusion or inability to respond appropriately to questions
- Blank or vacant stare
- Balance, gait difficulty, motor incoordination, stumbling, slow laboured movements
- Facial injury after head trauma
- Clutching head

It's important to note that you do not have to lose consciousness to be diagnosed with a concussion. This has traditionally been a common misconception.

The Canadian Guideline on Concussion in Sport (2017) suggests that any of the items mentioned above are possible indicators of a concussion, and therefore the athlete should seek out medical evaluation prior to returning to the game.

What to do if you suspect a concussion?
It's a good idea for all teams to have printed copies of the Concussion Recognition Tool 5 (CRT5). This is a series of questions and signs to look for to see if there is a possibility of a concussion sustained from an injury. If a concussion is suspected, it is critical to remove the athlete from play and ensure that they:
- Are not left alone for at least the first one or two hours
- Do not drink alcohol
- Abstain from use of recreational or prescription drugs
- Are not sent home by themselves
- Do not drive a vehicle until cleared by a medical professional
- Seek out a definitive diagnosis from a medical professional

What to do when a concussion has been diagnosed?
When an athlete has sustained a concussion, the following protocols should be followed for safe return to sport and school. For both protocols, if symptoms get worse or new ones arise, the athlete should go back to the previous stage. Each stage should be at least 24 hours in duration if symptoms remain stable. And a medical clearance letter from a doctor is required before return to gameplay.

See tables for each stage associated with returning to school or play. Note that an initial period of 24 to 28 hours of rest is recommended prior to starting Return to School and Return to Play protocols.

Concussions can affect many aspects of a person’s life. It is important to recognize and respond to them appropriately in order to mitigate risk and get back to regular life and regular play as quickly and safely as possibly.

To find out more about concussions and rehabilitation, you can reach Greg Cugnet, (MScPT, Registered Physiotherapist, Allan McGavin Sports Medicine Centre in Vancouver, B.C.) at greg@allanmcgavinphysio.com. Follow him on twitter @GregCugnetPT 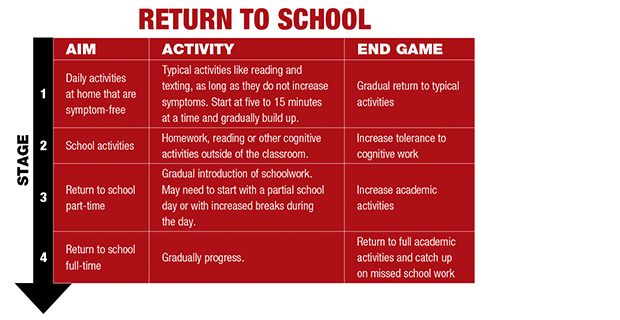 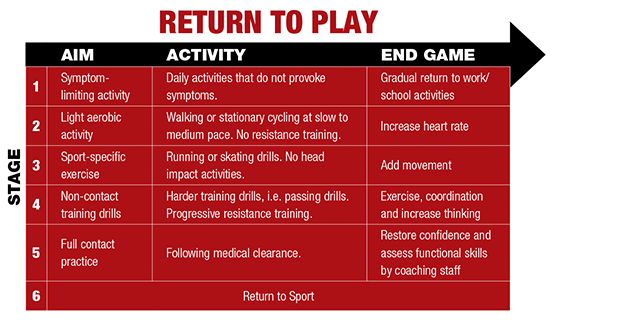