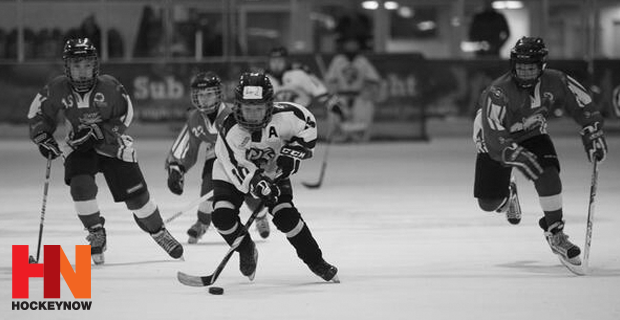 Teams with a high penalty killing percentage are usually at the top of their league in the standings and are often championship contenders.

Successfully killing penalties can be the difference between winning and losing games. In a game a timely penalty kill can swing the momentum in a team’s favor and lead to a win. A good penalty killing team can also play an aggressive style and have the confidence that their penalty killing can get them through.

A coach’s philosophy and system play are very important in a successful penalty killing unit. Without the right individual players on the ice with the physical and mental skills needed to be good penalty killers, the best system in the world will not work.

This article, for players and coaches will examine the individual physical and mental skills to be a good penalty killer.

As with any part of hockey, skating skills for a penalty killer are a key component. Speed is important but not a necessary requirement (does help on the forecheck) but quickness and agility are. There is no room for a player to skate in arches, straight line skating & stopping and starting at a very quick tempo are important. An agile player is very mobile and able to move laterally very quickly. 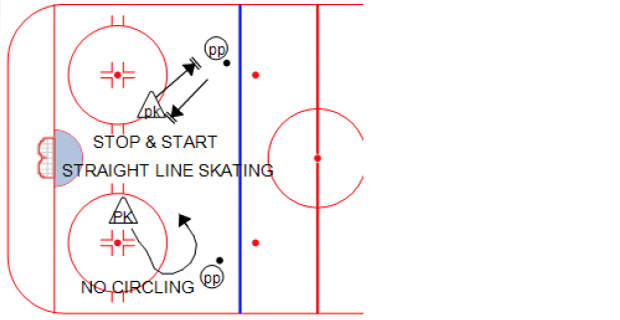 A player must also have an understanding of the principles of defensive hockey, such as angling, gap control defensive side checking, having an active stick and getting into shooting lanes (blocking shots). Angling is the ability to force the offensive player to go where you want him to go rather than going at a player in a straight line, which is a recipe to get beat.

The gap is the distance between the defensive player and the offensive player. A good penalty killer can recognize the gap and close it very quickly. 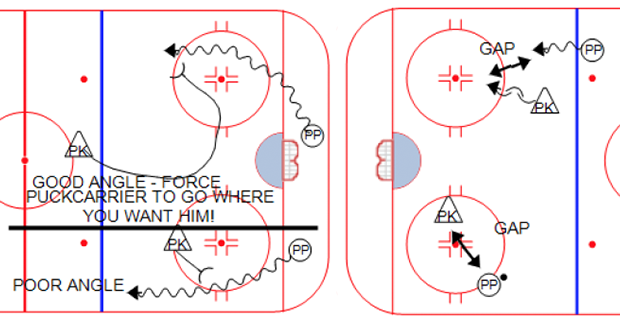 Keeping on the defensive side is keeping your body between the offensive player and the net. We use “net-me-man” as a teaching cue.

An often-overlooked aspect of defensive hockey and penalty killing is stick placement, we call it having an “active stick”. The penalty killer must keep his stick on the ice and in the passing lane of the player on the power play. Adjusting the stick to the passing lane of the puck carrier will prevent him from passing where he wants to pass and force him to make another pass selection. We like to keep the puck away from the top of the power play so encourage down low passing. We also close “seams” with an ”active stick”. A seam is the space between defending players (see diagram) and offensive player. With an active stick, the penalty killer will also be able to deflect passes and shots. 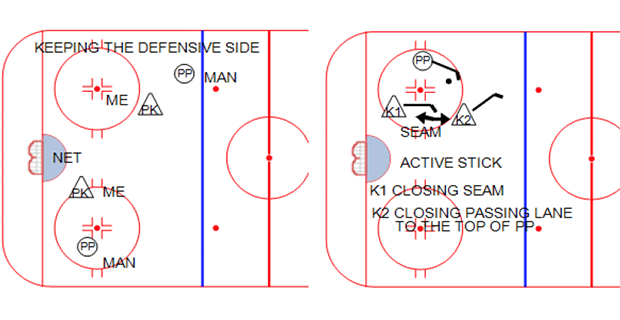 Another term we use is “body in shooting lane, stick in passing lane”. Closely related to being in shooting lanes is the role of the defensemen when an opponent is in front of the net screening the goalie.

There are two streams of thought on this subject:

1) Fronting - the defensemen sets himself in front of the opponent in the shooting lane ready to block the shot. The advantage to this is the defensemen is free to move as required.

2) Boxing out – Here the defensemen positions himself between the goalie and the opponent. By pushing on his hips and tying up his stick, the defensemen clears the opponent out of the shooting lane so the goaltender has a clear view of the puck.

We prefer the box out strategy. 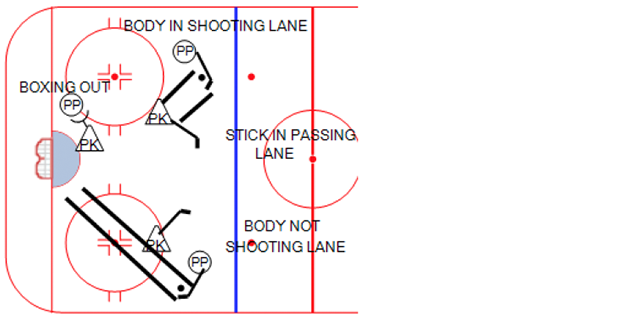 When gaining possession of the puck in the defensive zone the penalty killer must be able to recognize where to place the puck to make sure it is out of the zone and 200 feet down the ice. We encourage our players to use their forehands as they will obviously be stronger in their clears. Our teaching cue is pound the puck , puck out the first time and 200 foot clears.

Being able to win face offs can help the penalty kill melt down the clock anywhere from 15 to 45 seconds.

Other physical skills for players to possess are not to go for the big hit and get taken out of the play, rather bump & run, make the hit and then beat the opponent back to the net. This next point mainly applies to defensemen, do not get tied up in front of the net. Players need to be free and able to step out into shooting lanes or check an opponent as he takes the puck to the net. Lastly, penalty killers need to be the hardest workers on the team, have to outwork the power play and take short shifts (get off the ice when you can).

Hockey intelligence is arguably the most important mental skill required to be an effective penalty killer. Not too far behind the penalty killer must have a determined attitude, to battle, to never give up and to outwork the opponent. In other words the best penalty killer has a high energy, pit bull attitude!

The cues for when to pressure are: “bobbled puck”, “bad pass”, and “you see a number” (player has his back turned), we call this “calculated pressure”. Good Judgment comes into play in this situation.

On-ice communication is important for players in hockey at all times but it is key on the penalty kill. Penalty killers need to talk to each other, we call this “being your teammate’s eyes”. Scanning the ice with a “swivel head”, “reading the play” and being loud so call can hear are the main points to remember.

Having the discipline to take responsibility to follow the team system of play and all the above physical and mental skills are required for a successful penalty kill. It is important to remember that the best penalty kill is to “not take any dumb penalties!” and this requires discipline!

In conclusion, the late Bob Johnson (former NHL Stanley Cup-winning coach with the Calgary Flames) was famous for two quotes. One, "It's a great day for hockey!" most of us know. The other is not so famous but important for both coaches and players, “You don't need great skill to be a good penalty killer”. You just need hard work. There's no reason why every team shouldn't have a good penalty kill." There is a little more to it than that but we do leave you with the following:

Message to players: You do not have to be the most skilled player on your team to be an effective contributor. Study the main points in this article and apply them in practice and your coach will notice your determination and willingness to compete. By grasping the concepts of these few physical and mental skills, you can be a difference-maker game in and game out!

Message to coaches: First, use all the teaching cues or phrases in bold to reinforce these penalty-killing skills in practise. Second, and very important, don’t just use your best players on the penalty kill. Try to find and develop your roll players into penalty killers. When coached in the right way, they will take pride in their jobs as penalty killers and they will buy into your system and to the success of your team.

There is no stopping a pit bull!

If you have any questions about this article, anything about coaching, playing, would like me to come to speak to your group, train your team or learn more about our coming hockey camps you can email me at enio@coachenio.com , call 604 255 4747 or visit my website at www.coachenio.com.