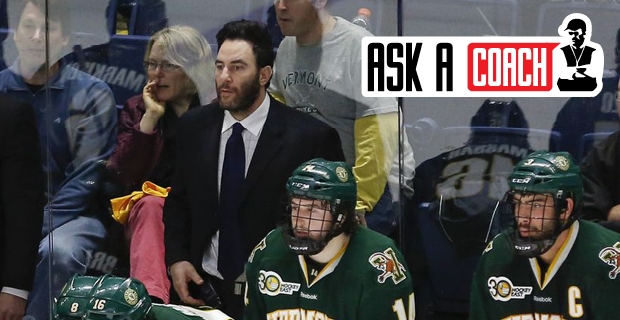 Kyle Wallach is currently enjoying a challenging season as an associate coach with the University of Vermont Men’s Hockey Team.

For Kyle and the rest of the staff at UVM, of course winning hockey games is important, but when you’re overseeing a program that’s built on the balance between academics and athletics, sometimes the bigger picture is far more crucial.

Even if that picture is not always in focus.

Kelvin Cech, The Coaches Site: College hockey is so much more than just hockey. Tell us about life at UVM and how you help your players strike a balance between academics and athletics.
Kyle Wallach: First off it’s about the location. It’s one of the best mid-major college towns in the country. We have about 10,000 on campus here on Lake Champlain. You get skiers coming through in the winter, and it’s just a great college atmosphere. Hockey games are a big time night out for the student body. Our structure here is that we want them interacting. They’re a close knit group because we’re not a huge campus. So you get that great college feel, buddies come to the games. You go to class between eight and noon, then you’re at the rink for video and practice from noon until three and then some more class time. That’s Monday to Thursday, then we’re playing the two games in two nights on the weekend. The biggest skill our people need is the ability to manage their time and to find a balance with everything.

What do you look for when recruiting new players?
You’re looking at academics and athletics in combination. It’s a student athlete

for a reason, so if you can’t do the school work we can’t take you here. We want great citizens on campus and A-level competitors on the ice. It helps having that mentality in the classroom as well. If one works and the other doesn’t, then it’s going to be a struggle, so we definitely look for that combination.

We spend all week preparing for the first game of a weekend series, and it can all go out the window in the first period. How do you guys prepare for that tight turnaround?
The fine line with preparing your team is finding a balance between what you already have in your system, your habits, and finding what works for your opponent. The biggest thing right now for us is finding a way to compete every night. We feel if we compete we have a chance. In game, reading and reacting, what can we do better, and not necessarily changing our systems but adapting to where we’re losing those battles on a Friday or Saturday night – that’s our focus when we’re preparing.

I guess the perfect system is one where the kids can react to everything, but if we had that then you’d never lose a game.
Right, it’s that response when something goes wrong. If you can respond in the right manner then it won’t lead to that next mistake. We try to keep the pre-scout pretty tight so we’re not overwhelming the guys, but sometimes a 20-second clip can mean the difference between a goal going in or even winning a game.

There’s plenty of debate in Canada about the right path – Junior A hockey and NCAA vs CHL opportunities. There are no guarantees either way, what’s your advice to parents of bantam players trying to choose?
We tell them to keep their options open. If you’re Sidney Crosby or Patrick Kane and you’re going to get paid, then it’s easier. But for everyone else, you have time at 15. There’s time to get bigger, stronger, faster, and to let your game grow. You don’t need to do anything just because you get drafted. For us, we worry about the NCAA path, and it’s about getting that education. You can get a degree and a college experience and still play in the NHL, or you can play in the WHL and enjoy the benefits of that route as well. The key is to do your homework as much as possible and take your time making a decision. But I get it, it’s very difficult for kids and their parents. We’re not allowed to contact parents, there are rules in place for a reason, so some kids feel like they’re neglected by NCAA schools. So some kids will sign contracts and their school options are closed, and that’s unfortunate.

What’s the end goal for the University of Vermont this season?
The focus for us has to be our next game. We have long term goals too, you want to win it all, but that’s not the focus day to day. It’s how we’re going to get there. We’re a young group and the injury bug is going through the room right now, so really we’re just trying to get better. We’re preparing for North Eastern on Friday and then we’ll prepare for UConn the week after that. So really our goal is to develop as a group and develop our identity. We’ve been in a lot of one-goal hockey games, games we’ve lost, so we really want to get on the other side of that but those longer term goals, it’s ironic because they’re solved on short term basis, and sometimes it’s more important to take it one day at a time. It’s cliché, but it’s really true.