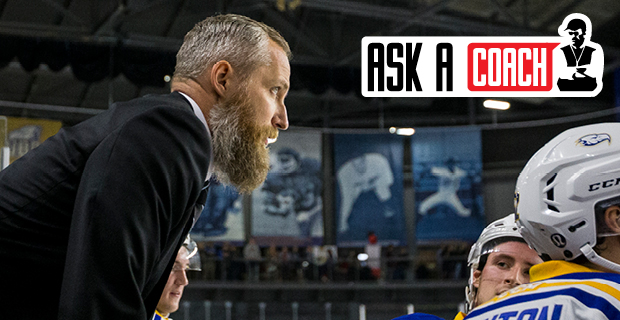 Sven Butenschon is starting his second season as the head coach of the UBC Men's Thunderbirds and his third with the team after making the transition from the ice to the bench in 2015.

In partnership with The Coaches Site, HockeyNow is helping you get the inside scoop from some of the country's biggest names in coaching. Every month, we’ll be exploring prominent themes and issues in our Ask a Coach series – starting with our inaugural entry on Preparation, below.

Sven Butenschon is entering his second season as the head coach of the UBC Men’s Hockey Team. Sven had tours of NHL duty with the Pittsburgh Penguins (more on that in a minute), the Edmonton Oilers, New York Islanders, and Vancouver Canucks before packing up his family to play a few more years in Europe.

But when it comes to preparation and seeing hockey through the post-secondary lens, it’s a whole new game.

Kelvin Cech, The Coaches Site: That was a long offseason man.

KC: What did you do all summer to get better?

SB: Recruiting is how it all starts. You think about who you’re losing, your team’s weaknesses, where you want to go short term, where you want to go long term, and you look for the right players to asses that criteria. A lot of that started last season as you know with driving out to Langley to watch WHL games, but it kicks into gear when you meet these players in the summer.

Another important aspect was our dressing room. We put a lot of work into creating a space that our guys want to come to every day. The dressing room renovations, creating ownership with the players, infusing the tradition and history – our room now shows that if they work hard for four or five years then their names will be on our walls.

Hockey specific, we watched a lot Pittsburgh playing. They’re in the upper echelon in the NHL and we use ideas and strategies that fit well with our personnel.

We also tweaked our fitness testing, partly to keep guys on their toes and also to make it more specific to us and our game. More of our testing occurred on the ice this fall.

KC: What’s important to focus on during training camp?

SB: You try to get the guys feeling good about themselves. There’s a new group, new roles, new students. It’s a grind. You have to shake the rust out and find your game. When you make your practice plan or your weekly plan you have a picture in your mind of how players are improving in at least one or two ways every week. That way by the end of the week you’ll know if you had progress.

There are no real tryouts in university hockey but we still focused on creating a tryout atmosphere. Listening to a lot of other coaches and being here for a few years now, I wanted to have more of a reward based environment. There’s nothing worse than doing everything you can and leaving it all out there but nothing changes. There are no line combos or colours, even though you might have in the back of your mind a couple ideas. So we focus on being as open-minded as possible and it’s definitely worked for a couple guys I’d say. Some of the older guys might not dig it, but that’s the reality.

KC: Alright, the season starts and we’re getting ready for a new opponent each week. Without giving away all our top secrets, what does that look like?

SB: At this point in the season it still has to be about us. You’re trying to find your identity. Who’s a great soldier? Who’s a leader? Who’s a follower? Followers are important too, you need guys who are willing to be part of the herd for the better sake of that group and know their role within it.

There’s going to be some ugly parts, the important thing is there’s progress.

Other than that it’s about cleaning up your game. There’s going to be some ugly parts, the important thing is there’s progress. Even if it’s just one or two things. Even if the group knows, look, we’re tied at two with SFU after two periods and you know what, that’s ok. Have confidence and focus on yourself and with that game it showed in the third what we were capable of. But at this time of year, it takes time.

KC: Does individual game-day preparation for athletes look the same as it did when you played, or has it changed big-time?

SB: I don’t think it’s changed that much. We used to kick the soccer ball around. The team meetings were the same, the timing was mostly the same.

SB: That’s a real tricky question. You can easily burn guys out for Friday night if you’re not conscious of rest and workload. You can have the lactic acid in your legs and you won’t have that jump when you need it. That’s probably the hardest thing for me as a coach is being aware of that pulse.

Monday, Tuesday, Wednesday, Thursday on the ice and then Friday night hits and it’s terrifying to have a group that’s flat. I woke up Saturday morning and felt like a I ran a marathon the night before, I can’t imagine what our guys felt. Fast forward a couple weeks and we’re going to be playing at 2:00pm on Saturdays.

We used to flush on the bike after, we don’t do that much here, the cold tubs are important, food right away, protein.

KC: You don’t like to talk about yourself too much unless I ask, so I’m asking now: what did you do to prepare to play in Wayne Gretzky’s final hockey game?

SB: That’s an interesting one, I’m glad you asked Kelvin. I was the seventh D for Pittsburgh at the time and was told I was only going to take warmup and not play, so I brought my camera to the rink.

I tried to hide it, you want to be one of the guys, you’re in the NHL and trying to act like it’s no big deal, but it was.

Someone got hurt in warmup and Kevin Constantine told me I was in so I went from not really thinking about hockey and taking pictures and being a fan to suddenly being on the ice and trying to focus and being a part of that spectacle.

KC: That’s a blurry picture you sent me of you shaking Wayne’s hand, is that the best memento you have?

SB: Yeah, my son found that online, he was telling a couple kids at his new school about it and they did some digging and found it. They gave us hats, my Dad still has a hat that says 99 on it. But just being able to line up and shake his hand after was one of the highlights of my career.

KC: How did you play that night?