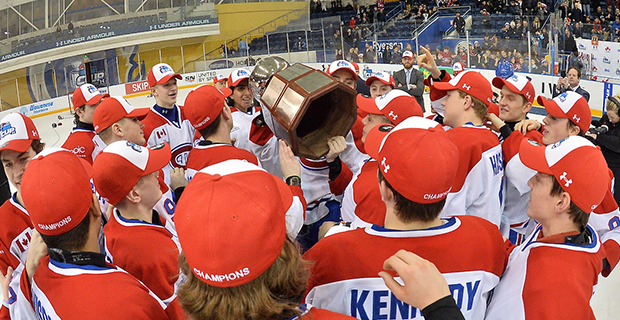 The Toronto Junior Canadiens defeated the Vaughan Kings 5-1 to capture the 2018 OHL Cup powered by Under Armour. (Terry Wilson/OHL Images)

The Toronto Jr. Canadiens had a certain flare this season when it came to playing on the big stage.

After winning the Toronto Marlboros International Hockey Classic during the holidays, the club added more silverware to their collection winning the 2018 OHL Cup.

The Junior Canadiens knocked off the Vaughn Kings 5-1 at the Mattamy Athletic Centre in downtown Toronto in a game that was televised nationally on Sportsnet.

Player of the Game Isaac MacLeod led the way with a goal and three assists as the Jr. Canadiens finished the tournament undefeated with a 6-0-1 record.

“It’s surreal right now, really hard to believe,” said MacLeod post-game. “We got that early lead and that’s so important in a game like this, especially with the nerves we had off the start.

“We got that first one, took advantage and got the ball rolling.”

Toronto took a 1-0 lead at 2:15 of the opening frame, capitalizing on their first shot on the Vaughn goal when MacLeod skated down right wing and beat Kings goal-tender Marco Constantini with a low shot that found its way into the net.

With Vaughn pressing for the equalizer, Toronto jumped ahead 2-0 when Ryan Tverberg had an easy tap in to put the Jr. Canadiens up by a pair.

From there, the Jr. Canadiens padded their lead to 3-0 as Liam Kennedy snapped a wrist shot past a partially screened Constantini from the top of the circle with less than five minutes to play in the first period.

Vaughn attempted to get back in the game throughout the entire second period after the Jr. Canadiens were called for five consecutive minors but the Kings were able to score just one time with a Cole Perfetti marker with five minutes to play in the second.

The third period featured a pair of Jr. Canadiens goals to pad their lead.

Dylan Robinson and team captain Shawn Spearing found the back of the Vaughn net to seal the win for Toronto who became the fourth GTHL club to win the OHL Cup Championship in the past five years.

Not only did they register a 6-0-1 record en route to the championship, they outscored their opponents 33-8.

“For all the hard work these boys have put in, to see them raise the trophy is very rewarding,” said Jr. Canadiens head coach Daniel Sisca. “My-self and the rest of the coaching staff couldn’t be prouder.”

“Winning this tournament has been a dream for a while,” said Robinson. “We kept things simple, went over video and were prepared for what they were going to throw at us.

“This is a great honour both for me and for our team.”

The Toronto Jr. Canadiens last appearance in the OHL Cup final came in 2014 when they fell 5-0 to the Toronto Marlies.

Their last championship came in 2008 when they defeated those same Marlies 5-2 in a tournament that featured future NHL players, Tyler Seguin, Tyler Toffoli, Devante Smith-Pelley, Jeff Skinner and Ryan Spooner.

The 2018 Gatorade OHL Cup All-Star team was announced post game with the following players being recognized.