The Rise of the Canadian Goaltender 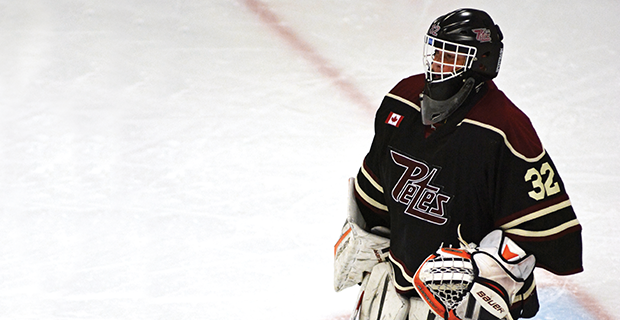 Year after year, the Great White North continually set the bar for goaltending, but over the past decade and a half, other nations have seemingly surpassed Canada in training, prospects and development.

Whether it was the static training or lack of resources available, puckstoppers seemed to plateau. It became evident during the World Junior Championships around 2009, where Canada lacked the in-net star power they had in the past.

Can’t-miss first rounders like Marc Andre-Fleury and Carey Price are no longer coming out of junior to lead the maple leaf to gold. The team that won gold five years straight from 2005 to 2009 have have just one championship since. Of course, the losses can’t be pinned all on goaltending, but it’s where the criticism lands.

Acting as the barometer of goaltending, the World Juniors seemed to be the final tipping point which ignited a much-needed discussion on the state of goaltending in this hockey-crazed nation.

Hockey Canada, the governing bodies of hockey in each province and other associations are working hard to turn things around and make it easier to get into the net – all while training personnel to be up to the task.

STRAPPING ON THE PADS
As most involved in hockey would probably agree, the current approach that has kids try out the position in Novice before settling on two goalies in Atom works. It gives any players interested a fair chance to try the position with little pressure. In Atom, with the skill rising and a need for a full-time puckstopper, kids have likely decided.

But that first inclination to strap on the pads isn’t always met with enthusiasm from the parents. Take Sean Hill, whose son volunteered to suit up in net in Novice.

“They asked if anyone wanted to be a goalie and of course his hand shot up,” Hill said. “I said ‘no’ because I didn’t want to pay for the equipment to be honest, but they said they supplied the equipment for the season so that’s how he became a goalie.”

Hill lives in Peterborough and his 10-year-old son Gavin plays AAA hockey in the Peterborough Petes organization. The elder Hill said he has been happy with the support provided for goalies at this age level.

“During the season there are certain development days where a goalie coach for the OHL’s Petes will come out to try to help the goalies develop. We also have a guy that comes on the ice as much as he can to develop the goalies,” Hill said.

Joey Ali, a goalie coach of eight years with ProAli Goalie Training in Surrey, B.C., said he thinks it’s good for goalies to get training as soon as they are committed to the position.

“In the second half of Hockey 4 (Novice, eight years old in B.C.) and they choose to be a goalie, it’s a good time to get instruction and more importantly to start playing goalie full-time,” Ali said. “The jump from Hockey 4 to Atom is quite big, especially at the rep levels. It’s important to get some consistent repetition in the gear and in the position.”

Another goalie instructor, JF Martel who runs World Pro Goaltending in Calgary, Alta., agreed that eight or nine is a good time to start training.

“When you get to Atom and become a full-time goalie, I think you want to be able to keep up with what the other guys and do a bit of training,” Martel said.

Hill, who never played hockey growing up, stressed that he believes the decision to play goal must be in the player’s hands.

“Going back to the kid, if they really want to do it, they’ll get into it and do it so I try to have the mindset that if they want it, they're going to do it and want it for themselves. It’s no good with a parent wanting it for them,” Hill said.

Martel, who is also a consultant for the WHL’s Medicine Hat Tigers, said the biggest difference he has seen in his time coaching goalies and hosting camps is the increase in the amount of players attending.

With position players excelling at younger ages and releasing harder shots thanks to better technology and coaching, it’s almost necessary for goalies to start young.

NEW TRAINING
Both Martel and Ali noted how their training has changed over the years and how their approach and focus with players has evolved.

“What we’ve been doing over the last couple of years is that we actually brought in a consultant for hand-eye coordination,” Martel discussed.

“I think more than ever, shots are so good now with the different sticks and training the forwards get. Guys can rip pucks early at a young age.”

Over in B.C., Ali noted how focus has moved more towards positioning and athleticism, something other countries also do.

“When I first started, there was a lot of emphasis on butterfly and blocking style, getting your body in front and not so much moving your arm but letting pucks hit your body,” Ali said.

“Now, it’s more about positioning, squareness, head trajectory, the proper chin angle over the puck, edge control. Before it was about sliding and getting there. Now it’s about about beating passes on your edges."

Jason LaBarbera played in the NHL for parts of 11 seasons and professionally for 16 years. Now, he’s the goaltending coach for the WHL’s Hitmen and working with the under-17 teams at the national level.

LaBarbera said the biggest weakness he tries to fix in goaltending comes from lack of mental training.

“You can see a kid in practice or a session and think ‘this kid is super skilled’ but you get him in a game and there’s a lot of moving parts and things that are happening. A lot of it is mental and how you deal with certain situations and failure,” LaBarbera said. “There’s a lot of things that need to go right for you to be successful. I’ve played with a lot of guys who are really skilled, but you get them into a game situation and they don’t know how to handle it.”

Ali agreed and stressed how essential cognitive skills are for the position. It’s something he always comes back to when he’s developing new training and programs.

“The mental side is the keystone in any successful goaltender’s career. Without the cognitive side, it makes it tough. One to deal with pressure, two to be able to read the play, three to be able to process and make decisions in the little amount of time that they have,” Ali said.

Outside of specific training, LaBarbera said he thinks more needs to be done to support all programs so there’s less time wasted for goalies.

“I guarantee most times if you go watch a Atom, PeeWee or even Bantam practice, goalies are standing for three quarters of it,” LaBarbera said. “They’re not getting reps, they’re not learning anything, they’re just standing there. You’ve got to go to these off-site places and now your mom and dad have to pay.”

Yes, the dreaded talk about money. It is probably the biggest hurdle for parents and very much the reason was Hill was initially worried when his son raised his hand two years prior.

Cost of equipment is expensive, as are goalie camps and one-on-one training. More support is necessary, plus it should be easier to get into the game.

WHAT’S BEING DONE?
In order to break down barriers for entry into the crease, Hockey Canada introduced a national goaltending model, plus a goalie coach certification plan was created as well.

The move to offer more coaching for goalies at minor levels as opposed to private, cost-incurring programs is essential to goalie development.

Hockey Alberta, for one, has taken a very proactive approach to goaltending after noticing a decline. They are providing resources not only for players, but also for coaches, which is just as important.

They recently introduced their Provincial Goaltender Development Plan which focuses on training coaches and players.

Regional Goalie Leads were implemented across six areas in the province as a point of contact for coaches, plus individual minor hockey associations get the chance to work with goalie experts to increase their knowledge.

Not only will this have a direct impact on the players through coaching, but camps and other speciality events targeted towards goalies are available.

Local minor hockey associations can borrow equipment for five- to seven-year-olds to try the position.

It’s a huge help for parents worried about the cost of gear, especially if their child doesn’t end up sticking with the position. It’s a good way to get more players in the net and discover if they truly want to pursue it.

These are just two of many new initiatives we’ve seen popping up over the past few years. With provincial hockey organizations working to make goalie coaching more accessible, the talent and quantity of goalies should be on the rise.

EQUIPMENT CHANGES AFFECTING THE POSITION
Gear has been changing with more and more technology added and more innovations coming to a pad.

Chris Joswiak, pro service manager for Brian’s Custom Sports, one of the top goaltending brands, noted the weight of pads is the most dramatic difference in play. It makes goalies more nimble and quick.

Working directly with the pros, Joswiak has been around for the rule changes, which initially are a scare.

“I’d say the biggest thing with the sizing there is initial panic, but goalies evolve. You see goalies training harder in the summer and working with goalie coaches,” he said.

What’s the next big thing coming to goalie equipment? Joswiak pointed to 3D technology without tipping Brian’s hand too much.

“Maybe 3D scanners that can properly measure and fit your leg and they come custom contoured to the shape and size of your leg,” Joswiak said.

How does that convert to young players?

“They’re going to start seeing these goalies in smaller gear and they’ll want to emulate that,” Joswiak said. “Although it doesn’t immediately trickle down to the amateur level, I think as the years progress, you’re going to see better moving goalies who are leaner.”

MOVING FORWARD
The fact that goaltending is a conversation that most in Canada have had is a positive sign. As more players join the position and more resources become available, the country should see more highly-skilled players entering the crease.

Yes, there must be something done to curb the cost for the elite Bantam and Midget players, but at the moment, the focus is on development and creating the best possible last line of defence.

Martel, the goalie coach out of Calgary, said he wants to see every minor hockey association with goalie help in place.

“You’ve got to hope that in the next, three-five-seven years, every association has a mandate to have some sort of goalie program in place,” Martel said.

“I just don’t think it’s enough. You learn the skill and how to do certain things so the skill level is high, but the hockey sense of the IQ of playing the position isn’t,” he said.

Like many of the country goaltending experts, Ali has high hopes after seeing Hockey Canada’s commitment.

“At the smaller level, I think it’s fantastic Hockey Canada identified there was an issue and they made changes to support Canadian goaltenders in junior hockey.”