Sean Monahan Takes Us Back to Where it All Began

When it comes to athletes, the term “humble” can be thrown around at an all-too-frequent rate. But in Sean Monahan’s case, humble doesn’t even begin to describe the quiet leadership, grace and gratitude that the 2013 NHL Draft first round pick has been displaying since his minor hockey days. In this special feature, we look back and ahead at the rising stock of the Calgary Flames assistant captain, who is, at heart, still just the kid from Brampton. 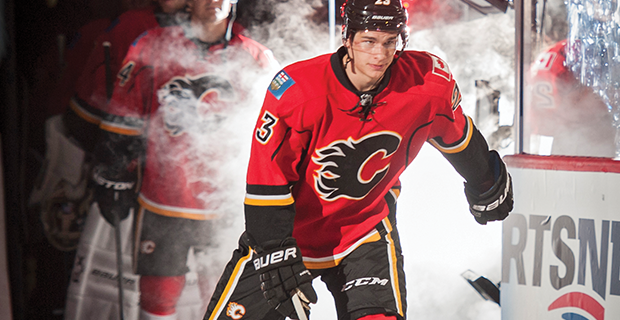 At the tender age of 22, Sean Monahan has already put together an impressive hockey résumé.

A first round pick of the Ottawa 67's in 2010, the Brampton, Ontario native son was eventually bestowed with the honour of captaining the legendary OHL franchise. In 2013, Monahan was also selected in the first round of the NHL Entry Draft, as the highly skilled centreman was grabbed sixth overall by the Calgary Flames. Four years and over 190 NHL points later, Monahan is a rising star with a young Flames hockey club that appears to have a very bright future.

But while Monahan continues to evolve on the ice, his polite, soft-spoken off-ice demeanour hasn't changed since his early years in the Brampton Battalion minor hockey system.

"He's definitely the same old Sean," assured Lee Bloor, who coached Monahan for a number of years in the Ontario minor hockey and middle school ranks. Bloor's son, Brett, who now plays U.S. college hockey for the University of Texas at El Paso, grew up playing alongside Monahan and Sean has stayed tight with a lot of his buddies from his days back in Brampton. Lee Bloor took in a recent Flames contest in Toronto and, despite the Flames losing 4-0 to the hometown Maple Leafs, Monahan made sure to spend some quality time with his former coach following the game.

"It was great to see him," said Bloor. "Sean is a very thoughtful young man and even a few hours later when he was on the team plane heading for another game in Montreal, he sent me a text message thanking me for coming to the Toronto game. It just goes to show you what a quality kid he is and he's one of those guys who was definitely brought up the right way."

In fact, as Monahan himself is quick to point out, it was his dad, John, who gave him the best piece of hockey advice he has ever received.

"You obviously get a lot of tips from a lot of different coaches growing up when it comes to the technical side of the game and how to improve your skills," said Monahan. "But my dad gave me the best piece of practical advice that I try to follow. He told me that no matter what happens or how successful you become in life, the key is to be a good person and not to change.

“When you're in the NHL, it's obviously a big business and winning and losing becomes very important. But we're still just a bunch of guys who loved playing hockey as kids and we're still just a hockey team trying to work through a season together to realize our goals.”

Monahan is involved in a number of charity endeavours in Calgary, including paying regular visits to the Alberta Children's Hospital.

“We're so lucky to play in the NHL and there's really nothing much to complain about. It gives us a tremendous platform to help people and if we can take time to do things like visit a children's hospital and put a smile on the face of some people who really need it, the least we can do is reach out and try to contribute to make our community a better place to live in,” Monahan said.

As you might expect, a few of the kids tend to get a little tongue-tied when their favourite NHL player arrives on the scene. But here's a news flash: Monahan also suffered from a severe case of shyness when he was a small lad. 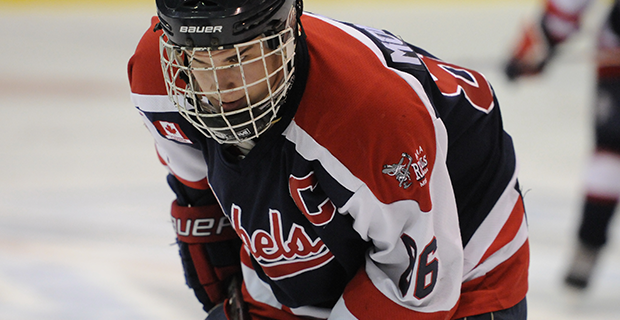 MISSISSAUGA REBELS “As a young minor hockey player, I didn't like being the centre of attention and I'd usually skate to the bench as fast as I could after scoring so that I could hide behind the boards and I wasn't the focus." (Aaron Bell/OHL Images)

"Sean never wanted the spotlight," remembered Bloor. "Because he was so talented, there were games that he could easily score four or five goals. But he didn't like hogging all the glory and what really made him happy was going out and setting up some of his teammates who hadn't scored yet. Sean would tell them to go to the front of the net, keep their sticks on the ice and he'd feed them a pass. He got a big kick out of seeing the smile on a kid's face who just scored a goal on a goalie he probably had no business beating."

"My shyness was the biggest road block I had to overcome," agreed Monahan. "As a young minor hockey player, I didn't like being the centre of attention and I'd usually skate to the bench as fast as I could after scoring so that I could hide behind the boards and I wasn't the focus."

So, how did Monahan eventually overcome his terminal shyness?

"Time was the big thing," explained Monahan. "Eventually I realized that if I was going to play the game at the high level that I wanted to, I was going to have to perform in front of a lot of people and deal with media attention.

"Steve Yzerman and Joe Sakic were two players who always delivered in the crunch when the spotlight was on them. I wanted to be that kind of player and I eventually realized if that was going to be the case, I'd have to accept the pressure of being under the microscope."

Truth be told, Monahan has been on the radar since his earliest days in the game. Bloor coached him as a seven-year-old in Minor Novice AAA and then again in the grade 7 and 8 school ranks and, along every step of his hockey journey, Monahan definitely stood out.

"He always had incredible hockey sense," said Bloor. "I remember one game where he had the presence of mind to bank the puck off the boards between two checkers. The puck bounced out in front of the net and before the other team could react, Sean drove to the crease and put the puck in. He was always one step ahead of everybody else, a real 'thinking man's' hockey player, and if you watch him in the NHL today, he's exactly the same way."

Reaching the NHL is obviously the pinnacle for every young hockey player and Monahan admits that, growing up, it was the number one thing on his mind.

"I loved the game so much and didn't consider any other options. I'd watch 'Hockey Night in Canada' with my dad and always pictured myself following in the footsteps of Yzerman and Sakic, two players I really admired. To be perfectly honest, I thought that playing in the OHL would be the quickest and the best way to get to the NHL. That was always my goal and when I got drafted by the 67's, I felt it was the perfect route to becoming a professional hockey player." 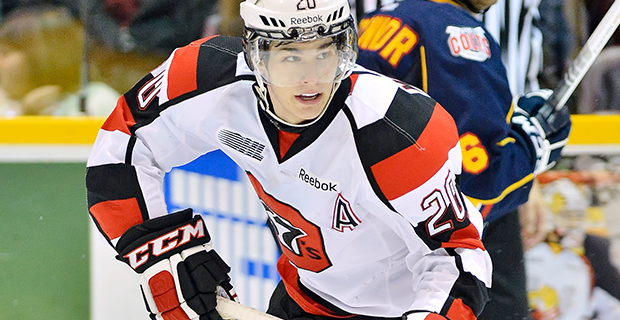 OTTAWA 67's “I thought that playing in the OHL would be the quickest and the best way to get to the NHL…when I got drafted by the 67's, I felt it was the perfect route to becoming a professional hockey player.” (Terry Wilson / OHL Images)

At heart, however, Monahan is still that shy kid from long ago who has been on the receiving end of a number of 'pinch me' moments during his young NHL career.

"Getting drafted in the first round by the Flames was definitely an exciting time. It's the crowning achievement of everything you've worked for as a young hockey player. It's also a huge accomplishment for your family and friends, because they were the ones who made some major sacrifices to help you realize your dream and I feel very fortunate that I was able to share draft day with a lot of people who are extremely close to me.

“With that said, I've always been a big believer that the draft isn't the be all and end all for a hockey player. Lots of guys who have turned out to be stars in the league didn't even get drafted at all. So, it's not where you get picked, or even if you get picked, it's what you do with whatever opportunity that comes your way that really defines you as an NHLer."

But despite the fact that he's now a bonafide NHLer himself, Monahan continues to be a huge fan of the game. 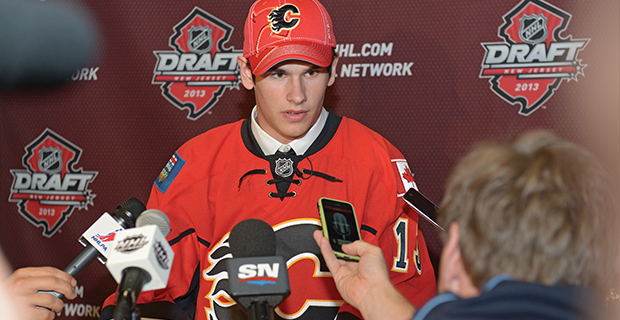 2013 NHL ENTRY DRAFT "Getting drafted in the first round by the Flames was definitely an exciting time. It's the crowning achievement of everything you've worked for as a young hockey player.” (CHL Images)

"Even though I had seen myself playing in the NHL, it was still surreal to actually find yourself in the league as a young player. My first NHL game happened to be against the Washington Capitals. Alex Ovechkin was another NHL star that I had admired for a long time and I'll never forget the feeling of skating on the ice and realizing I was about to go head-to-head with Ovie. It was a really special feeling and something I'll never forget."

Meanwhile, as Monahan continues to live the NHL dream, people from his minor hockey past are thrilled that he's still the same old Sean.

"You see a lot of celebrities who change once they achieve their professional goals," pointed out Bloor. "They start to maybe drive the fancy cars, flash around their money and forget all about their roots. But Sean isn't like that at all. He's still just the kid from Brampton who loves the game and hasn't forgotten about the people who are important to him. When you think about it, that's pretty special and it's the big reason why the people from his past still play such an important part in his life."

The inspirational hockey life of Sean Monahan, with more special moments sure to come.