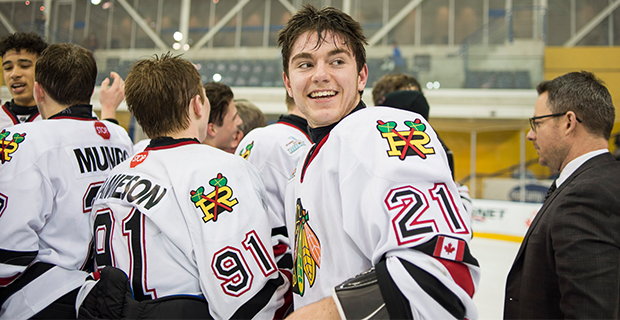 With 12 seconds left on the game clock, Lucas Rowe snapped the puck back from an offensive zone face-off to Dennis Golovatchev, who scored and brought the final tally up to 3-2 for the win. (Erin Riley photo)

Mississauga Reps Minor Midget AAA head coach Harry Evans always believed in his team, and he knew they would come through when it counted the most.

Evans was right on the money when his team delivered the goods to win the 2017 OHL Cup powered by Under Armour.

The Reps entered the event as a Wild Card team but left with the trophy as Ontario’s Minor Midget champions when they defeated the Toronto Nationals 3-2 in the championship final.

“This season, our goal at every tournament was to play on championship day, we didn’t win all of them but we did get there,” Evans said.

“Entering play at the OHL Cup our goal was no different than the rest of our tournaments: play on the final day of the event.”

What makes the Reps' victory such a great story is that they were eliminated from the GTHL playoffs on February 7, five weeks before the drop of the OHL Cup powered by Under Armour.

The Vaughn Kings knocked the Reps out of the playoffs in the first round, winning the series eight points to four, leaving Mississauga with a slim chance of earning a spot at the provincial Minor Midget AAA championship in mid-March.

With the unknown looming, Evans, his coaching staff and players decided to go to work and face adversity head-on.

“We practised three to four times a week just like we always do and prepared for whatever lied ahead,” Evans explained.

As the GTHL playoff door closed on the Reps, another one opened in the form of the Kraft Cup – and they took full advantage of it.

The Reps and their hockey cousins, the Mississauga Senators, squared off in a seven-game series with a guaranteed OHL Cup Wild Card spot on the line for the winner.

The Reps won the series (4-3) and locked up a spot in the OHL Cup Wild Card Play-In schedule with a game against the Halton Hurricanes (OMHA), which suited Evans just fine.

“I was really happy that we had a chance to play for a spot in the OHL Cup and prove ourselves once we got there. We didn’t play Halton this season but I knew a lot of their players and what kind of team they would have.”

Mississauga made short work of Halton, handing the Hurricanes a 5-2 defeat, to became one of 20 teams in the round robin portion of the tournament.

Thirty-six days after the Reps had been eliminated from the GTHL playoffs, their OHL Cup dream was still alive. They were right back in the thick of things.

“Three of the four teams in our Division were very familiar to us,” Evans admitted.

“We played the Marlies a couple of times during the season and beat them every game but one. Thunder Bay was big and physical and we knew that matchup would be a challenge because we are not overly big.”

Evans was right once again as his troops defeated the Marlboros 3-1 in their opening game.

They edged Thunder Bay 3-2 in Game 2, then played to a 2-2 deadlock with Ajax Pickering.

In their final round-robin game, the Reps registered their highest goal total when they overpowered the Eastern Ontario Wild 5-3, finishing with a 3-0-0-1 record.

With seven points in four games, the Reps finished atop the Shanahan Division and faced the Toronto Jr. Canadiens (second place Subban Division) in quarterfinal action.

“I wasn’t sure which way that game was going to go because the Jr. Canadiens matched up well against us all season. We played them three times, with each team winning once and one game finishing in a tie,” Evans explained.

The Reps head coach really had nothing to worry about because his charges had little trouble disposing of their quarterfinal opponents with a convincing 5-1 win.

The tournament was starting to heat up for the Reps as they were headed for a head-on collision with the London Jr. Knights (ALLIANCE Champion).

The Knights entered the OHL Cup powered by Under Armour as the top ranked team, finishing the round robin undefeated with a perfect 4-0-0-0 record.

“I knew the Jr. Knights were an excellent team, we certainly had our work cut out for us. We played them back in October in London at the Wendy Dufton Memorial Tournament and won 4-1 in the championship final. I liked our chances, but it all came down to how well the kids played.”

Despite being outshot 44-24, the Reps continued their magical run with a 3-1 upset win over London to advance to the championship final against their GTHL rivals, the Toronto Nationals.

The Junior Nats were also a wild card team that fought and scratched their way to the big dance.

The Nationals and Reps saw a lot of each other during the year with Toronto finishing atop the GTHL standings with a 23-7-3 record and 49 points while Mississauga was 20-5-8 for 48 points.

In three head-to-head meetings, their record was 1-1-1, so there was not a lot separating these two teams, something that soon became apparent in the championship final.

With the score knotted up at two goals apiece and only 12 seconds remaining on the game clock, it looked like the finale was heading to overtime.

Extra time did loom large until Dennis Golovatchev decided the outcome of the game for Mississauga with a flick of his wrists to score the tournament winner.

The deciding factor was an offensive zone face-off that Mississauga used to notch the dramatic game-winning goal.

With the draw set up to the right of Toronto Nationals G Zach Roy, Mississauga centre Lucas Rowe snapped the puck back to Golovatchev who was standing and waiting for a pass near the top of the faceoff circle.

"We pulled it off perfectly. Rowe won it back to me and I just shot the puck.”

With less than ten tics on the clock, overtime was on everybody’s minds except Mississauga’s.

“We didn’t want to go into overtime because we knew it was going to be nerve-wracking. When coach put me on, we said 'number two’ – that’s our faceoff play – and it worked.”

The win marks the first OHL Cup powered by Under Armour championship for the Mississauga Reps Minor Hockey Association, an honour that every player and coach will cherish forever.

“Making history, you can’t say that very often, it’s an amazing feeling and we’re honoured as a team,” said Golovatchev, who will forever be remembered as “the Reps player who scored the winning goal.”