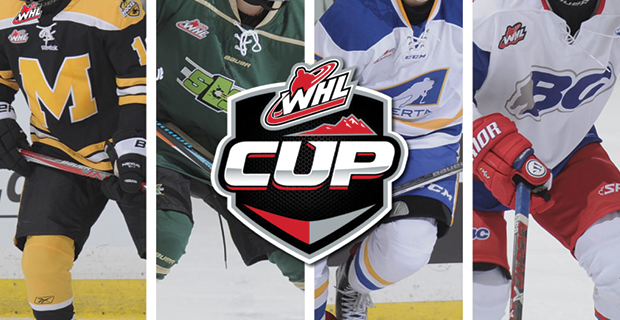 The WHL Cup kicks off Oct. 18 in Calgary and Manitoba and Saskatchewan with both look to end the western run and championships. (Courtesy of prospects.whl.ca)

The next flock of WHL (Western Hockey League) superstars will get their chance to win provincial bragging rights and the the newly minted WHL Cup this week in Calgary.

Previously known as the Western Canada U16 Challenge, the WHL Cup commences Wednesday, Oct. 18 at the Markin McPhail Arena at WinSport, the premier sports facility at Canada Olympic Park.

Bringing in the top players 15 and under coming out of the 2017 WHL Bantam Draft, the talent level is unparalleled at this age group. 72 of the 80 of players had their names called at the WHL draft in May, and if not, the rest have been listed by a WHL team or they will after this tournament, unless they plan to pursue the college or Junior A route.

THE LINEUPS
Team Alberta has the top forward, defenceman and goalie drafted in last year’s WHL Bantam Draft and will be looking for their third straight victory in this tournament. Talent-wise, Alberta is the favourite. No. 1 overall pick and 2017 HockeyNow Minor Hockey Player of the Year (Alberta) Kaiden Guhle (Prince Albert Raiders) is joined by second pick Connor McClennon (Kootenay Ice) while they have eight other skaters who were drafted in the first round, plus goaltender Garin Bjorklund.

The top defensive pairing could be Guhle and second rounder Logan Dowhaniuk as both play for Okanagan Hockey Academy Edmonton. Of the team’s six defenders, only Ronan Seeley (fourth round) was not a first round draft choice.

Last year’s runner-up, B.C., have the second most first round picks and an imposing team. Led by No. 3 overall pick and 2017 HockeyNow Minor Hockey Player of the Year (B.C.) Justin Sourdif (Vancouver Giants), who leads the BC Major Midget League in points per game, there’s also fifth pick Aidan De La Gorgendiere (Saskatoon Blades) on the blueline and No. 6 Jack Finley (Spokane Chiefs) up front. Finley’s father, Jeff, was an NHL regular for more than 700 games.

Three others round out the first round picks and all are forwards, giving B.C. a formidable attack. The west-coasters also have a few players who slipped in the draft because they made it clear they won’t be playing the the WHL as the opt for the US college route. Ethan Bowen, who has already played two games for the British Columbia Hockey League’s (BCHL) Chilliwack Chiefs and is committed to the University of North Dakota, Cole Shephard, who will play for the BCHL’s Penticton Vees, and Ryan Helliwell, another UND commit, will be showing off their skills in front of their WHL teams who will hope to persuade them go the WHL route instead.

In net, B.C. has two top goalies from the Canadian Sport School Hockey League (CSSHL) in Dylan Garand and Koen MacInnes, both putting together strong starts to the year.

For Manitoba, they will be counting on two key players to help them make the finals. Eleventh overall pick Seth Jarvis (Portland Winterhawks) ranked second in goals scored in Bantam Prep for Rink Academy last year and is off to a hot start again. Daemon Hunt scored 60 points in 36 Bantam AAA games en route to being drafted 17th overall by Moose Jaw, and has already skated in two games for the Warriors, proving he can play top competition.

There’s still plenty of skill beyond these two, including Nolan Ritchie, who led Manitoba Bantam AAA in goals and points with 51 and 89, respectively. Early draft choices Ty Thorpe and Jakob Brook are also offensive weapons. Cory King and Reece Richmond are good puck movers on the backend and will compliment Hunt.

In net, Manitoba happens to have the duo from Rink Academy’s Elite 15s team: Dante Giannuzzi, a fifth round WHL draft choice, and Nikulas Jerris, undrafted in the WHL but selected in the Manitoba Junior Hockey League (MJHL) draft. The two lead the CSSHL in save percentage, but Rink has played fewer games than the rest of the league.

Led by a strong offensive trio, Saskatchewan is looking to improve on their recent results. Kaden Kohle and Josh Pillar, both first rounders, and Ryder Korczak should score in bunches. Kohle is a big forward who can bruise opponents and all three averaged more than two points per game last year.

On the backend, Saskatchewan doesn’t have game breakers by going off draft pedigree, but they should be strong at moving the puck. Austin Dycer, Alex Ozar and Ethan Ironside hit double digits in goals last year and could be strong powerplay options. The defence will need to be at their best to compete with the high-powered offences at the tournament.

Saskatchewan has two early round draft picks in net, second rounder Bryan Thomson and third rounder Ethan Hein who will both provide two solid options for the five days. Hein has had a stronger start to the season than Thomson, so he may get game one.

With only the best 20 players per team, it’s one of the top tournament at this age level worldwide.

Since 2009, the WHL has sponsored the event in a partnership with the four western provinces governing bodies: BC Hockey, Hockey Alberta, Saskatchewan Hockey Association and Hockey Manitoba. The tournament is the opener of Hockey Canada’s Program of Excellence and the first experience the players get with the governing body of the sport.

Last year’s tournament saw Team Alberta defeat Team B.C. 3-2 in overtime to win the cup. Manitoba claimed third place with a win over Saskatchewan. Neither Manitoba nor Saskatchewan have won top prize at the tournament and they’ll be looking to break the B.C. and Alberta run.