Puck Drop Edition: Gear Up for the Minor Hockey Season 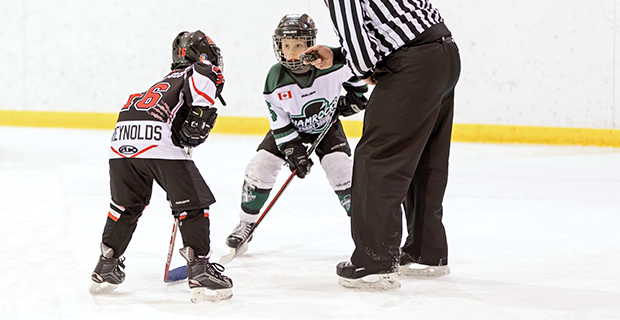 Another summer is drawing to a close.

That means it’s time to put away the baseball gloves, soccer cleats and lacrosse sticks and bring out the hockey bags.

Let’s face it, everyone loves what the summer brings: the heat, longer days and of course, summer break.

But nothing compares to the excitement of a fresh hockey season, whether players are on track towards becoming the next Connor McDavid, or simply just love the game.

Each season brings about new initiatives as associations from coast to coast look for better ways to improve the game and keep it fun for the hundreds of thousands of children involved.

That said, here’s a look at what coaches, officials, volunteers, parents and most importantly, players have to look forward to as another hockey season draws closer and closer.

Growing the Game
There’s always the need to adapt to a new generation of players and that’s clear no matter where you are in the country.

For instance, Hockey Alberta remains invested in its Every Kid Every Community program, which has been in place since 2011 and aims to expand the game’s outreach across the province.

Funded by the Hockey Canada Foundation, Every Kid Every Community provides assistance through player and community grants.

“We want to make more strides in impacting at the grass roots level,”

“Perhaps, it’s looking at what we can do in schools. Are there some types of programs we can work with individual schools or school districts, put a hockey program in place or an introduction to hockey program?”

Lyon also made reference to another well-known introductory program, The First Shift, a collaboration between Hockey Canada, Bauer and Canadian Tire.

First Shift introduces children and their families to the game in an environment that breaks down perceived barriers that Hockey Canada believes held children back from playing hockey.

Rather than committing to paying for a whole season, parents can register their kids for a six-week trial program with full equipment provided at a reduced rate.

Recognizing low participation growth rates over the past decade, the hope is that First Shift will contribute towards the global initiative Grow The Game’s goal of adding one million new players to the game by 2022.

Recently, The Second Shift was introduced as a transition program for children who want to continue playing after their First Shift trial period has ended.

Lyon said some of Hockey Alberta’s efforts will be dedicated to helping those children stay involved by working with minor hockey associations to ensure the timing of these programs can provide a seamless transition.

In BC, the need to provide solid introductory programming is just as important to keep players involved in the game for many years.

“Our goal is to ensure that the players who entered our system in the fall of 2016 will play their entire minor hockey career under our enhanced programming,” said Barry Petrachenko, CEO of BC Hockey.

“That is not an easy task when you consider the size and diversity of our organization, and it will take a huge effort to ensure we all stay on track.”

Cost is still considered a deterrent when it comes to families’ reluctance in enrolling their kids to play hockey.

That’s especially clear within the Greater Toronto Hockey League, the largest hockey league in the world, with more than 40,000 players involved.

However, Peter Kourtis, the GTHL’s manager of hockey operations, believes many people hear about the expensive cost of rep hockey and mistakingly associate that with house league.

“To join the sport of hockey at an introductory level is still very reasonable and there are still places you can go,” Kourtis said.

“We have to get past the bias that it’s too expensive and it’s only this or that. It’s affordable at the most popular level, which is house league.”

Even if the cost barrier can be overcome, Petrachenko believes bringing “Face to face interactions to the Facebook generation,” is paramount.

“The challenge is that this generation has many options available to them and vying for their time and attention,” he explained.

“We have to do our best to ensure our programming is getting better every day.”


Full-Time Half-Ice
A regulation rink can seem quite daunting for a five- or six-year-old getting their first taste of hockey.

To bring it into perspective, Ontario Hockey Federation executive director Phil McKee references a project by USA Hockey where adults played on a much larger ice surface than what they’re used to and with nets the size of ones used in soccer.

“It drives the message home very quickly of what the experience would be like [for children],” McKee said.

“From a science background [children’s] bodies are prepared for a shorter distance, not a longer distance of skating.”

While there are teams or associations who have been proponents of scaling down the ice surface for initiation level players (five- and six-year-olds) for years, the cross-ice/half-ice regulation has now been made mandatory by Hockey Canada, scheduled to come into effect in the fall.

Leading up to the mandate, the initiative has been implemented at various points all over the country.

The Ontario Minor Hockey Association has made it part of its Initiation Program since its inception 35 years ago.

BC Hockey implemented it for both IPs and novice players last year. That move was made in an effort to enhance the organization’s long-term development model.

“The decision last year showed great leadership, and the rest of the country is now following our lead,” Petrachenko said.

“We have also implemented a transition plan from Novice to Atom to develop those skills needed as players move up in age categories,” said Petrachenko. “Our goal is to develop a standardize skills curriculum for all players.”

Lyon said the partnership has gone so well that Pembina committed to providing more dividers for the upcoming season.

“It was basically about double what Pembina had originally committed to,” he said.

“They stepped forward, said yes and will be willing to cover it this year. It’s been a phenomenal response and it’s great having Pembina willing to engage in the partnership more than they originally intended at the outset.”

Reducing the ice surface has shown a significant rise in the number of touches, passes and shots on goal per player.

A Step Towards Equality
Hockey’s governing bodies in Ontario have instituted a new training program to support trans-inclusion among teams across the province.

Gender Identity and Gender Expression training has now been mandated for coaches in the OHF as well as those across Hockey Northwestern Ontario and Hockey Eastern Ontario.

Coaches will in turn be able to encourage a more inclusive and understanding environment within their teams.

“It’s a misnomer that we’re teaching kids about transitioning and gender expression, whereas it’s actually human rights that we’re teaching coaches about,” Kourtis said. “When players come to you and have identified a certain way with their gender, regardless of what their birth certificate says, they still deserve to play hockey or any other sport.”

The mandate stems from a complaint to the Ontario Human Rights Tribunal in 2013. That season, Oshawa teenager Jesse Thompson identified as a transgender boy and was prohibited from changing in the same dressing room as his teammates and was subject to harassment around his team as well.

While it is only being mandated in Ontario as a result of the human right complaint being filed there, McKee hopes it’s not too long before it is instituted nationally.

“We’re on the forefront of a topic that I would say collectively, we’re not all fully up to speed with,” he said. “This gives us the start to become more comfortable and knowledgeable about this not only in hockey, but society.”

What started out as a five-school league in 2009 has turned into an operation that serves 19 schools – including newcomers St. George’s School from Vancouver for the 2017-18 season – and 69 teams across seven divisions (both male and female).

It boasts an enrolment of around 1,300 students.

In the past, Sidney Crosby, Jonathan Toews, Nathan McKinnon and more top Canadian players seeking a top notch high school hockey experience would have to go to the U.S. in order to do so.

"From that point, I think what you're seeing is sports schools being designed for the education-based hockey experience,” said Kevin Goodwin, Chief Operating Officer of the CSSHL.

“Every single program has to have an academic advisor, but the big thing our league likes to approach is the complete focus on the student athlete: academic, characters, citizenship, sportsmanship and the last thing for us is hockey development. We want to create the all-encompassing person and hockey is kind of the driver to do that."

The league hopes to eventually expand out east, but for now, they want to work with BC Hockey and Hockey Alberta to help grow the game at the grass roots level.

That includes the CSSHL’s desire to introduce its players to the possibility of officiating one day.

"We want to grow the game entirely," Goodwin said. "If we can take 10, 12 or 15 kids out of our 1,300 and push them into officiating when they never thought that was an avenue for them, I think that would be a great thing to help the game.”

The CSSHL has produced a number of notable alumni, including NHLers Matt Dumba and Curtis Lazar as well as 2017 HockeyNow Minor Hockey Players of the Year Justin Sourdif and Kaiden Guhle.

Comprehensive Concussion Policy
It’s no secret that concussions have become a major concern associated with hockey at all levels of play.

The collaboration is going into its second year and has provided crucial information and guidelines for coaches and parents to follow under suspected concussion protocol.

“It is one of the biggest studies of all the kids when you consider everyone that plays and what goes through it.”

In the past, many concussions have gone unreported, mostly due to both the desire and pressure to continue playing at a high level.

The new protocol makes it much more difficult to get away with that sort of behaviour since clearance from a physician is required once a child believes they’re close to the stage where they’re well enough to be able to get back on the ice.

“It’s changed the pace of how kids get back into sports,” Kourtis said.

“You’ve got to spend two days at each stage (in the policy) and there are seven stages, so you can’t return in a week.”

The second season of this initiative comes after a summer in which concussions were highly discussed across North America.

In July, a study examined 111 brains of deceased NFL players and 110 of them were found to have chronic traumatic encephalopathy (CTE) as a result of repeated head trauma.

Closer to home, federal government-funded Parachute Canada released a new guideline that included seven steps to go through before returning to play. Aside from addressing the seriousness of concussions, Parachute aims to educate individuals on other preventable injuries, claiming preventable injuries cause 16,000 deaths, 60,000 disabilities and 3.5 million emergency room visits each year in Canada.

With all of these initiatives in place, youngsters will have a lot to look forward this season from coast to coast.

Having fun remains at the forefront of the frozen game, but coaches, administrators and other volunteers should look towards helping children develop not only as players, but as upstanding citizens.

Programs are constantly being created and tailored to help preach strong core values and ensure player safety as well.

So get ready for another exciting season, no matter where you are on the skill spectrum, from September to April.