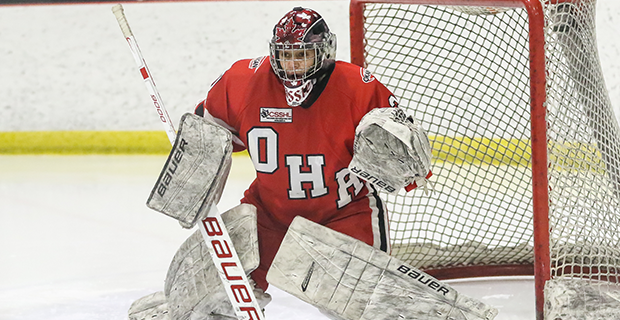 Cassie Shokar has been helping the Okanagan Hockey Academy female prep team climb the ranks all season and was sitting at 8-1 with a 1.22 GAA and .944 save percentage as of mid-February. (Two Point Photography & Design)

In the final few months of the Canadian Sport School Hockey League (CSSHL), playoffs are shaping up and several teams are standing out above the competition.

In Bantam Varsity, St. George’s 1 is one game away from finishing their season undefeated, while the Northern Alberta Xtreme (NAX) is just a few contests away from also staying perfect in the Elite 15 Division.

The league boasts several future hockey stars in both the men’s and women’s ranks and has continued to draw top Western Canada players. Here’s a look at teams having spectacular seasons.

BANTAM PREP
Having already locked up the No. 1 seed, Okanagan Hockey Academy Edmonton (OHA) has a few games remaining to build momentum entering the postseason. They’ve been beaten only handful of times this year at 24-2-2, have a superior goal differential and are well-balanced.

Second through sixth are separated by just six points as of Feb. 14. NAX, Rink, Delta Green, Yale and Okanagan could all be threats to knock off OHA Edmonton, with Burnaby not far behind. Playoffs will be fun to watch in Bantam Prep.

Led by many top prospects for this spring’s WHL Draft, OHA Edmonton has nine players averaging at least a point per game. The other favourite in the division could be NAX who have the league’s top two scorers in Dylan Guenther (3.5 PPG) and ‘04 standout Matthew Savoie (3.4 PPG). NAX won the John Reid Memorial Tournament in January, one of the top Bantam tournaments in Western Canada.

BANTAM VARSITY
The powerhouse St. George’s 1 have been steamrolling competition, averaging more than 11 goals per game while allowing just a shade over one against. Their largest victory was a 28-0 win back in October.

Second place Delta (20-4-1) has been the closest to knocking off St. George’s 1, losing 7-5 earlier in the year and will be the biggest threat in the playoffs, but they have scored 100 less goals and will be in tough to stop the high-powered offence.

ELITE 15
NAX, like St. George’s 1 from Bantam Varsity, have been beyond impressive. With 31 straight wins, the Xtreme are five away from going undefeated. The difference between NAX and St. George’s 1 is the closeness of games. While NAX is far ahead in stats categories compared to their league counterparts, they’ve played several contests decided by a goal or two, including a shootout win over Edge School earlier in February.

The postseason should be more interesting in this division. As of mid-February, Edge (45 points), Burnaby (43 points) and Delta (43 points) were battling for second, and each had played close games against NAX this year.

FEMALE PREP
With the league’s top three scorers way ahead of the rest of the competition, Pursuit of Excellence (POE) has relied on a heavy offence to lead the Female Prep Division. Dara Greig, who has a sensational 51 points in 14 games, along with teammates Anne Cherkowski and Danielle Serdachny at 35 apiece, sat above the next closest player who had 18.

MIDGET PREP
At 30-1-1, Burnaby has locked up first ahead of Delta, their greatest challenger. Burnaby has scored nearly 70 more goals and allowed more than 10 fewer than the next closest team, plus they’ve won 20 straight games.

With the league’s fourth to seventh top scorers, offence is no problem for the the team. They’ve got a few WHL draft picks including Kalen Szeto, Kent Johnson, Elan Bar-Lev-Wise and Ryan Helliwell.