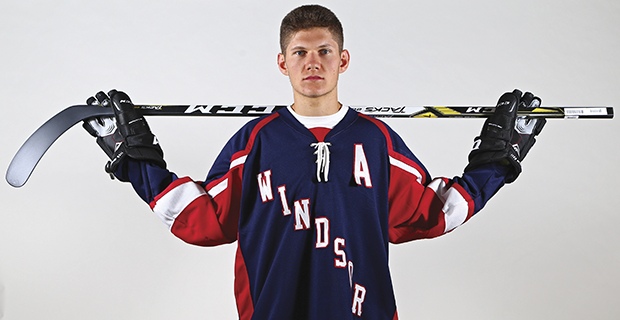 If you're looking to define 16-year-old defenceman Owen Lalonde, the 2016 HockeyNow Ontario Minor Hockey Player of the Year, all you need to do is ask him about his favourite player.

Lalonde, after all, grew up in Windsor cheering for one of the true legends of the Ontario Hockey League. Mickey Renaud was the gritty, hardworking captain of the OHL Windsor Spitfires, helping lay the foundation for a high-powered squad that captured back-to-back Memorial Cups in 2009 and 2010. Unfortunately, however, Renaud didn't live long enough to taste the glory first hand. In a death that shocked the entire hockey world, Renaud, a fifth round draft pick of the NHL Calgary Flames, passed away because of a rare heart condition in February, 2008. Like many hockey fans, an eight-year-old Lalonde was absolutely crushed.

"I didn't know him (Renaud) personally, but I loved watching him play at the old barn in Windsor and when he died it was really tough. It showed me that you should never take anything for granted. You need to be nice to people and live in the moment and appreciate everything you have because you never know what's going to happen in life."

Since his death, the OHL has honoured Renaud's memory by posthumously awarding him the "Mickey Renaud Captain's Trophy.” (This year's winner, by the way, was Michael Webster, captain of the Barrie Colts.) It's handed out to the OHL captain "who shows leadership, on and off the ice, while displaying passion and dedication to the game of hockey and to the community he represents."

The criteria for the HockeyNow award shares some of those same attributes, and Lalonde is certainly a deserving winner. Steve Masse has coached Lalonde for the past five years, including last season when he served as head coach of the Minor Midget Windsor AAA Spitfires.

"Owen is a phenomenal kid," enthused Masse. "He does everything right. He always supports his teammates and has a great attitude. He's a leader with tremendous hockey skills. His smarts are above everybody else on the ice and he has the special ability to slow the game down. A lot of time when you have stars on your team they can get a big ego, but Owen is the same guy to everybody and sometimes he doesn't even know how good he is." 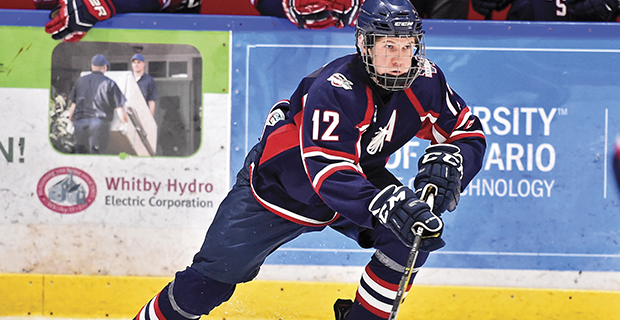 One-timer Owen Lalonde has been the ultimate offensive defenceman for the Windsor Jr. Spitfires, finishing the season in the top position in points and assists. (Aaron Bell/OHL Images)

Lalonde's stats, however, serve as a pretty solid reminder of his talent level. The 6-foot-tall, 174-pound blueliner racked up an impressive 37 points in 33 games last season and, even though he's a humble lad, Lalonde admits to owning some impressive tools.

"My composure, patience with the puck, the ability to read a play and being in good position are my main assets as a player."

Lalonde's all-around athletic ability. In addition to being one of the top young hockey players in Ontario, Lalonde was also a highly ranked baseball player and competed in high school track and field, with the javelin serving as his main area of expertise. His mother, Elaine, is a high school physical education teacher in Windsor who has always encouraged Owen to spread his sporting wings. But in April, Lalonde was selected second overall at the OHL draft by the Sudbury Wolves and with hockey now the main sport on his horizon, javelin and baseball have been forced to take a back seat.

"I started playing baseball this summer but after a few games I realized it was too much and that I had to start focusing on my hockey workouts to get bigger and stronger. It was tough giving up baseball, but sometimes that's what you have to do if you want to further your career in one sport."

With that said, Masse believes that playing more than one sport gave Lalonde a huge advantage.

"I went and watched Owen play baseball a bunch of times and he was an absolute stud," said Masse. "His hand-eye is phenomenal. When he was developing as a hockey player, Owen was taking one-timers when most of the other players were just learning how to take slap shots."

Lalonde will be unleashing those deadly one-timers next season as a rookie defenceman with the Wolves, and he's excited about the step up in competition.

"I'm really looking forward to the opportunity to play with and against some of the best junior hockey players in the world. Moving to the next level is going to be a very interesting challenge and it will be great to test my skills against top quality players to see how I measure up."

Of course, no hockey player is perfect and Masse points to one area of Lalonde's game that could use some work.

"He needs to get a little more physical. He plays the game like (Detroit Red Wings Hall-of-Famer) Nicklas Lidstrom. Owen's not going to hit you – he's just going to take the puck away from you. But as you move up the food chain, you've got to play the physical parts of the game.

It's not that he's afraid of the rough stuff. It's just that, at the minor hockey level, he's so good he doesn't have to get physical. He'd often ask me 'Coach, why do I have to hit him if I can just take the puck away from him and go with it?' I'd tell him, 'Well ‘O,' you've got a point,’ but I'd like to see him get a little tougher and a little stronger."

Towards that end, and in a salute to his "all-around athlete" rep, Lalonde is spending his summer taking boxing lessons. Under the guidance of former Canadian champion Josh Canty, Lalonde is pounding the bag at the Border City Boxing Club in Windsor. CHL commissioner David Branch has done a brilliant job of cleaning up junior hockey, but fights still break out every so often and Lalonde wants to be ready – just in case.

"It's all about learning how to protect and defend yourself if an altercation on the ice ever comes up. You can always get better at everything.

My strength and quickness at the next level are things I have to work on because you're going to be up against bigger and faster players."

Lalonde, though, appears to have all the qualities that go into being a must-see OHL prospect, and a proud HockeyNow Player of the Year.

The leadership skills of the late, great Mickey Renaud.

All-around athletic ability honed on the baseball diamond, track and field venue and, yes, even the boxing ring.

And a humble nature that ensures continued growth as a a hockey player and a human being.

"You often find that when guys peak too early they think they're good enough already so they don't have to keep working," said Masse. "But Owen's not going to be one of those guys. My advice to him is that he's not good enough yet and he has to keep pushing himself.  He's still just a kid but he's doing everything the proper way and as he continues to develop and grow, I'm confident he's going to be very successful.”