On Top of the World: CSSHL Keeps Gaining Traction in Canada’s Hockey Landscape 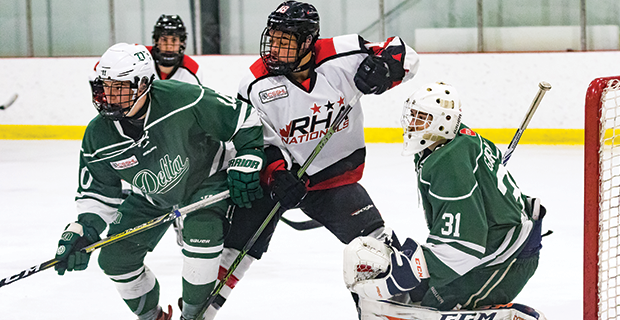 Just nine short seasons ago, the CSSHL kicked off with only five sports schools. Now the league is made up of almost 70 teams in 19 schools – with plans to expand further east – as they prepare for another season storybook ending at the WHL Bantam Draft.

In 2009, the Canadian Sports School Hockey League (CSSHL) was born, with five member schools in B.C. and Alberta taking on the task of developing elite players in a high-quality athletic and educational environment.

Jump to today, and the CSSHL is now a massive 68-team league spanning Canada’s four Western provinces in 19 schools and seven divisions.

Kevin Goodwin, the league’s chief operating officer, has been around since that first meeting that launched it all.

Goodwin said it all came together rather easily, with the first five all wanting a common league in which their student-athletes could play.

“At the time, every single one of these programs are playing in different leagues and different areas. It was all over the map so it just turned into a ‘let’s work together and get it done’. Once it got to that point, it was actually pretty smooth,” Goodwin said.

Goodwin continued: “It’s our tenth year and it’s gone from eight teams, two divisions, 55 games and 150 student athletes to anywhere around 60 to 70 teams and around 1,300 student athletes. We had over 1,200 games this year. I never thought that would have happened in nine years to be honest with you.”

And one of the reasons the first few years were so smooth because the league was filling a gap in Canada’s hockey landscape.

“Hockey Canada had that summit in ’99, and coming out of that was the fact we need to develop a pathway for kids to do a sport in a dedicated environment in our country because there wasn’t anything like it. Kids like Crosby going down to the States to do Shattuck. We had Notre Dame but that was pretty much it in Western Canada,” Goodwin said.

From a national perspective, keeping the top players here is important, but at the school level, the focus is on giving student athletes the resources to succeed on the ice, in the classroom, and in the real world. And it’s because of this collective mindset that the league has increasingly been attracting top talent, most notably at the Bantam ranks. Last year, 11 of the first 12 WHL Bantam Draft choices played in the CSSHL, and this year, more than half of the first 10 picks are expected to be CSSHL players.


CSSHL CHAMPIONSHIPS
For the fifth year in a row, the CSSHL held their championships for all divisions in one city, with Penticton playing host for the third straight year from March 9 to 18.

“All together between student-athletes, coaches and attendance, we would probably have about 4,000, maybe 4,200 come through the City of Penticton. It’s turned into a very big event which is great for the town,” said Goodwin.

It’s a central location for WHL, college and Junior A scouts to watch the players and is a huge boost to the city.

“Last year we had an economic impact of over $2.8 million, this year we’ve added 20 additional games and three extra days, so we’re expecting an impact of $3.2 million for the city of Penticton. Hotels are jammed, restaurants are jammed, busses are coming in and out of the complex the entire weekend,” Goodwin said.

And the camaraderie amongst teams is a huge indicator of the event’s success as well.

“We had all 68 teams in Penticton over a 10-day period, sometimes at the front half or back half. The reason we host it all at one spot is because it allows programs that have multiple teams to go out and support other teams within their school. It allows them to get together as a group and celebrate their season and end the year. We had four or five teams from one program sitting down for a meal together. That’s such a unique experience and creates that bond between the kids.” 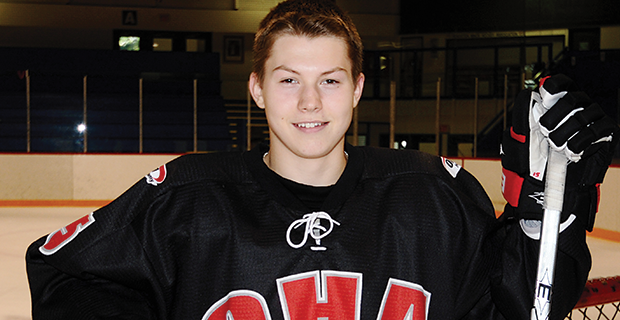 Curtis Lazar was selected as the 2010 HockeyNow Minor Hockey Player of the Year after completing an incredible 115-point season with Pursuit of Excellence Bantam Prep and being selected second overall by Edmonton at the WHL Bantam Draft. (Courtesy of the CSSHL)

FORMER CSSHL STARS
Two of the CSSHL’s most successful alumni, Matt Dumba of the Minnesota Wild and Curtis Lazar of the Calgary Flames, were part of the early days of the league.

Dumba, a Calgary native, stayed at home to play at Edge School in the CSSHL’s inaugural year.

“I had an awesome time in the league. They were fun games and we developed some rivalries, and I think we won it my year. It was a blast. We kind of started and built the foundation of what the league is,” he said.

Dumba said he follows his alma mater and has noticed the incredible growth of the league.

Starting in an academy at a young age was also beneficial for Dumba in his career.

“It really did help me develop my game. I was able to work out, play hockey and practice every day and use the facilities our school had in that league. I really took advantage of it and I think it helped my game a lot,” Dumba said.

Lazar also stayed close to home, as the Salmon Arm native suited up at the nearby POE and OHA.

“There was the big rivalry, I played on both sides and those were some of the most intense games I have been a part of. I know for myself, it allowed me to grow, play against some good competition and really get used to the professional lifestyle where you’re practicing everyday.”

Like Dumba, he also still closely follows the league is amazed at what it has become since he moved on in 2011.

“The growth in itself where you can have a full league with teams throughout all of B.C. and Alberta – it adds that other element where kids can work on their game and develop at a faster pace,” Lazar said.


FEMALE HOCKEY
One evident area of growth in the league comes on the female side. In 2009, there were no  female teams. 2010 saw the introduction of the Female Prep Division, with Banff, POE and OHA competing.

This year, there were eight teams in Female Prep and four in Female Varsity, with many top players who are destined for postsecondary play.

Goodwin said he’s been happy with the growth of the girls game, especially seeing them a part of the Championships at the end of each year.

“Obviously female numbers aren’t as high for players as the males, but we understand that and at this point we don’t plan on expanding a whole bunch in Western Canada in our top Female Prep Division, maybe one more team.”

With fewer players, there are less teams and divisions, but as the CSSHL continues to grow, expect the opportunities for females to do so as well.


MOVING FORWARD
In February, it was announced Saskatchewan will be getting their first sports school and entry into the CSSHL with Prairie Hockey Academy commencing operations.

On March 21, the Okanagan Hockey Academy announced a new school for the 2018-19 season, located out east in Whitby, Ont.

As Okanagan Hockey Group president Andy Oakes explained, “it’s important to provide talented student-athletes with all the resources they need to be successful, and this includes both physical training and quality education.

"This model proves to be successful with the consistent expansion of the CSSHL from its inception, and the program only continues to become more refined and effective. The opening of the Okanagan Hockey Academy in Whitby will provide student athletes in Eastern Canada with the same opportunities to grow and develop into well-rounded hockey players.”

Goodwin spoke about goals for the CSSHL, and expansion is something on the league’s mind.

“Our mission statement is actually to be national leaders in education-based hockey. We would like to see it get national, we would like to be on the east coast. Obviously that’ll depend on programs wanting to become Hockey Canada sports schools and to even join our league,” Goodwin said.

“We’re adding another six or seven this coming year and it’s new programs plus the Prairie program out in Caronport. As for expansion in the west, I’m going to say we might see two or three more programs and that’s it for Western Canada. Part of what we’re doing is we’re trying to allow people in different parts of the country to do a sports school model if they do so choose and stay close to home,” Goodwin said.

The future is bright for the CSSHL, and for hockey in Canada.

As Goodwin explained, “the league is not just about sports schools, it’s about growing the entire game.”