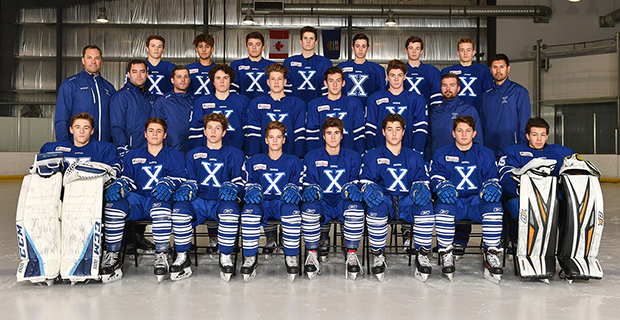 The Northern Alberta X-Treme Elite 15s are 15-0 to start their CSSHL season. With eight players scoring at a point-per-game or better average and a strong goalie tandem, NAX is gunning for a record year. (Courtesy of naxhockey.com)

Elite 15s is a top Midget Division in the Canadian Sport School Hockey League (CSSHL) and one team is taking the division’s name quite literally.

The Northern Alberta X-Treme (NAX) have 15 straight wins to open the season and are undefeated sitting atop their Midget Division with one of the more impressive starts in league history.

With 108 goals for and 23 against, NAX are averaging 7.2 tallies and just 1.53 against as their stellar season moves forward. Eight players are averaging at least a point per game, led by Ty Yoder with 22 goals and 32 points.

Goalie by committee is working well for the X-Treme with Ty Marcinkowski and Connor Ungar splitting duties. Marcinkowski, a Seattle draft choice, is 7-0 with a 1.43 GAA and .934 save percentage. Ungar has eight wins, a 1.62 GAA, .920 save percentage and two shutouts.

The X-Treme haven’t dominated every game, playing to two one-goal games against second-place Delta which have been the closest contests. Delta is 13-3, four points back of NAX and have been also having a standout year. NAX won both games 3-2 back in mid-October and the teams play next in January.

There are some tough games coming up, with a three-game series against Rink Academy in Manitoba commencing on the 24th. Then, the three teams play again two weeks later in Alberta. Rink is 6-1 so far and boast most of the top young Midget players in the province so these could be some close fought battles.

Last season, NAX went 16-9-5, finishing fifth out of nine teams in the regular season before a solid playoff run that resulted in berth in the finals. NAX lost 6-3 to Burnaby to finish second. Since it’s the Elite 15s Division, players are all born in the same year, so no players remain from last year’s squad.

X-Treme is just one win from matching last year’s total, and with the firepower and talent they have this season, and record run could be on the horizon.