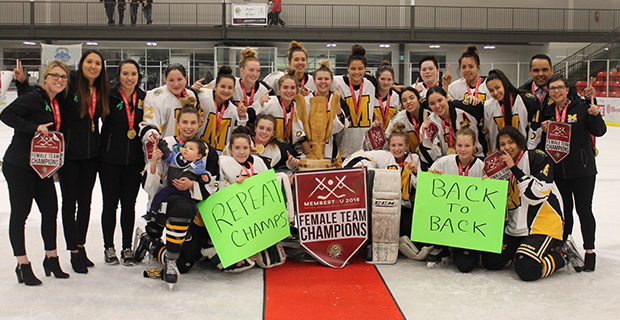 After the Esso Cup was held in Bridgewater, N.S. last month, another big-time national championship came to Nova Scotia, bringing the top Aboriginal hockey players from across the country.

The National Aboriginal Hockey Championships (NAHC) welcomed the top Bantam and Midget skaters representing their home provinces and territories and it was one to remember.

On the men’s side, British Columbia knocked off a powerhouse Saskatchewan team, while Manitoba repeated as champs in the women’s division.

Beyond the hockey, the NAHC fosters “cultural unity and pride” and works as a “focal point for grassroots and regional Aboriginal hockey development,” according the the tournament website.

Players come from all sorts of different programs, some playing locally in their communities and others at high-end travel teams.

Held in Membertou, part of the greater tribal group of the Mi’kmaw Nation in Cape Breton, N.S., the tournament has moved to different Indigenous areas across the country each year.

In the semifinals, Saskatchewan beat Ontario South, the second place Pool A team, by a score of 4-3, their closest game yet. Austin Lamotte scored the game winner with less than three minutes to go.

On the other side, BC bested Manitoba 4-3 as well after scoring the game’s first four goals before weathering the storm after Manitoba scored the next three.

B.C. and Saskatchewan met in the finals, but Saskatchewan was the victor between the two in round robin when they won 5-1. However, B.C. came out as a new team. Up 3-0 after the first period, B.C. found the scoresheet but so did Saskatchewan, leaving the prairie squad with a three-goal lead entering the final frame.

After scoring twice in about three minutes to draw within one goal, Dylan Devers came up big to score the tying goal with just one second remaining, forcing overtime. Devers wasn’t done as he potted the overtime winner to give Team B.C. the gold medal with a final score of 6-5.

Manitoba and Ontario South battled for third place and Manitoba earned the hardware with a 4-1 victory.

Saskatchewan’s Jayden Dureau was dominant in the tournament, scoring eight goals and 14 points. Tying him in points was Hadyn Delorme, who had nine goals. On their tail was Saskatchewan’s Lamotte with 13 points.

It was a tough tournament for New Brunswick (0-4) and Eastern Door & North (0-3-1) who both finished on the bottom of their respective pools.

WOMEN’S DIVISION
For the second consecutive year, Manitoba claimed the women’s NAHC, rolling from an undefeated round robin in Pool A, through a semifinal drubbing and into the final.

Interestingly enough, the final four teams from both men’s and women’s sides were the same teams: B.C., Manitoba, Ontario South and Saskatchewan.

Manitoba worked B.C. 10-1 in the semifinals, highlighted by Keyanna Lea’s four points. Successful on four of five powerplays, it was a big factor to push them to the finals.

On the other side, Ottawa South outshot Saskatchewan by 20 en route to their 5-3 win. The game was tied at twos entering the third, but Ontario South scored three goals in 2:26 to get a spot in the final.

In the finals, Lea was involved on all five goals for Manitoba as they beat Ontario South 5-3. Manitoba led the entire game, spotting a 2-0 lead through one and they didn’t let off the gas. Bianca Zak turned aside 19 shots in the win.

Keyana Lea was the most dominant player across the weekend, but her sister Keyara was just behind her in regards to scoring. The twins ranked first and second in scoring – Keyanna had nine goals and 21 points in six games, while Keyara had five goals and 15 points.

There was no home ice advantage for Atlantic as they lost all four games in the round robin, as did the other east coast squad, New Brunswick, across in Pool B. Saskatchewan, who won Pool B but fell to Ontario South in the semis, ended up claiming the bronze with a 4-3 overtime win over B.C. thanks to Anna-Leise King who tallied the winner.

Zak and Shayna Moore were steady goalies all tournament, each going 2-0 in the round robin for Manitoba with save percentages over .900.
Since 2001, the NAHC has welcomed hundreds of talented players, many who have gone on to successful hockey careers. Those include Micheal Ferland, Dwight King and Brigette Lacquette, among others.

Next year, Whitehorse will host the 2019 edition of the championship, bringing in the next wave of Canada’s top Indigenous hockey players.