Justin Sourdif Named 2017 HockeyNow Player of the Year for B.C. 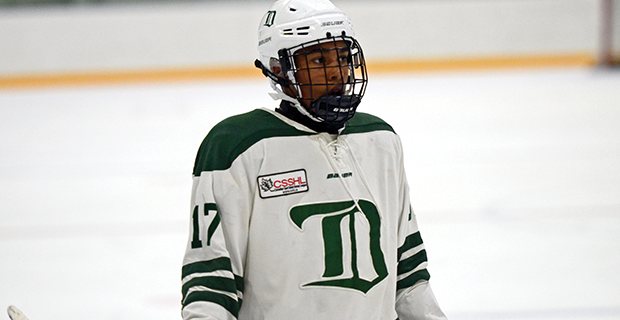 You have to be of a certain vintage to remember 'Waikiki Hockey.'

But check it out on YouTube, you crazy kids, and you'll be amazed to watch Wayne Gretzky, complete with an Elvis-style pompadour, starring in the campy skit featured on a famous 1989 edition of "Saturday Night Live.”

However, Justin is familiar with hockey in Hawaii – or at least a hockey family's holiday in the land of Aloha. The Sourdifs, as it happens, were enjoying a rare vacation in Maui when we interrupted their island paradise to conduct this interview.

Not that they were all that bothered, mind you, as our chat was to celebrate the fact that Justin has been named as the HockeyNow Minor Hockey Player of the Year for B.C.

"We don't get a chance to get away very often because we're so busy with hockey," said Justin's proud dad, Erik. "But we're having a great time and this (the HockeyNow honour) is just the icing on the cake."

Justin, a native son of Surrey, B.C., is coming off a stellar season with the Delta Hockey Academy's Bantam Prep team, leading to him being selected third overall in this year's Western Hockey League Bantam Draft by the Vancouver Giants. In 29 games, the 5' 11", 158 lb. forward put up 32 goals and 34 assists – a 66-point pace to go along with 45 penalty minutes; proof that Sourdif can play the game any way you want.

"Justin is a complete player," underlined his Delta co-coach, Shane Kuss. "He's one of those 200-foot players the NHL likes to talk about. He's got good size, solid strength, tremendous skating ability and has a real knack for putting the puck in the net at big moments in the game."
Case in point?

Sourdif's outstanding performance at the 2017 U16 B.C. Cup, leading the tournament in scoring with nine points in four games as his "Team White" squad ended up taking the title.

So, with his ability to score big goals and lead his team to championships, Justin Sourdif sounds a lot like a pretty fair hockey player by the name of… Sidney Crosby?

"Wait a second," laughed Kuss. "I don't want to put that kind of pressure on him!"

Just kidding, coach. The fact is, every young player needs to carve out their own niche and it all begins with a true love of the game.

"He definitely has that," enthused Kuss. "Justin loves being at the rink and being around the guys on the team. He always has a big smile on his face and he really cares about how the team is doing."

In fact, Sourdif says that helping his buddies out is at the very core of his puck passion.

"One of my favourite things about hockey is being able to deliver a nice pass to one of my teammates," he said. "Maybe you set them up for their first goal of the season, or something like that. It's a great feeling and if you can be there for your teammates, it's a huge factor in winning a hockey game."

Not that Sourdif always needs his teammates to win a game.

"I can remember lots of times last season when I'd look at the other coaches and we'd say 'Wow, did Justin just pull that off?’," said Kuss.

"He'd be sitting on the bench with a big grin and then he'd hop over the boards, block a shot, go in and score on a breakaway and win us the game. He's an unbelievable player because he does a little bit of everything and he's not just a one-dimensional guy who's only worried about scoring goals."

What about the eye in the sky?

Milan Dragicevic, a WHL Scout for ISS (International Scouting Services) Hockey weighed in with his assessment of  Sourdif's ability.

"Justin is a leader by example on the ice. He's always ready to work, gives a hundred percent, loves to work out and be around his teammates. He's a high energy player who loves to compete, plays a complete game in all three zones and can play any position. Justin has a great attitude and knows it's ‘team first.’ His tenacity on the ice and willingness to do the extra work off the ice sets him apart from his peers". 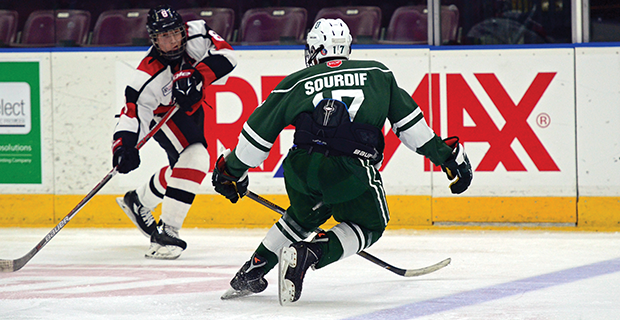 Justin Sourdif led the Delta Hockey Academy’s Bantam Prep team in goals this past season and was also the point leader at the 2017 U16 B.C. Cup. (www.stinkylockers.com)

Hockey dads, meanwhile, aren't afraid to provide a little of their own scouting when it comes to their child's on-ice progress. Justin's father, Erik, didn't actually play ice hockey growing up in a small mill town on the B.C. coast. However, he did take part in a number of raging road hockey games and has sat up in the stands in countless cold rinks watching his son chase pucks for a number of years. As a result, Erik isn't afraid to chip in with a little "fatherly advice" every now and then.

"He's pretty good about it," said Justin. "My dad is really honest about my game. He doesn't puff me up by telling me how good I am all the time. But his constructive criticism is always fair and he gives me a lot of solid little tips on how I can improve."

In the end, though, Sourdif's biggest assist from his hockey family comes in the form of the sacrifice they've made for his game. His dad is a hardworking electrician for the Vancouver SkyTrain system and his mother and teenage sister have also been an important piece of the puzzle.

"My family is the biggest part of my entire hockey life," praised Sourdif. "My parents have been driving me to the rink since I was a little guy and my sister has given up a lot of time and her own interests so that I could play the game. I really appreciate all the things they've done for me."

Next up on Sourdif's hockey "do list" features a jump up to the Midget ranks next season, where he'll suit up for the Valley West Hawks. The Hawks are Langley-based team in the B.C. Major Midget loop and Sourdif believes it's a perfect fit.

"The Hawks share the same facilities with the Vancouver Giants," Sourdif pointed out. "That means I'll be able to be around their guys and pick up pointers on some of the things I need to take my game to the next level."

But while he prepares for life with his new hockey family, we need to give a big thumbs up to the entire Sourdif family for Justin laying claim to the HockeyNow Minor Hockey Player of the Year award.

Enjoy your family vacation before you head back to the rink, because Justin's incredible hockey journey is just getting started.