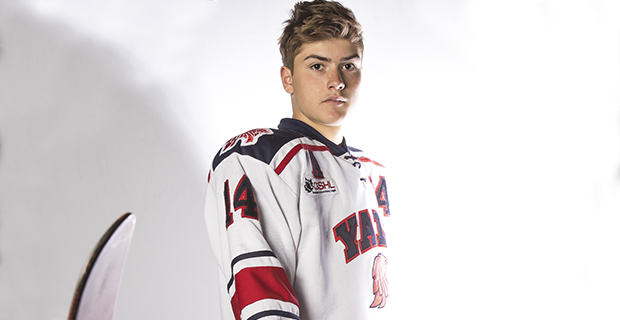 Josh Williams might be the answer to a hockey trivia question one day.

“Who is the 15-year-old forward from Langley, B.C. who won the 2016 HockeyNow B.C. Minor Hockey Player of the Year award, before becoming a scoring star with the Western Hockey League Medicine Hat Tigers?”

Williams is your man and, by the way, hockey trivia happens to be right in his wheelhouse. Brad Rihela served as Josh's head coach at the respected Yale Hockey Academy in Abbotsford, B.C. last season, and he says Williams is a true hockey history buff.

"We spent a lot of time at the start of the year involved in various team-building activities and one of the things we had some fun with was hockey trivia. It was pretty impressive to find out some of the things Josh knew about the history of hockey. He's definitely a student of the game and he's a real trivia expert."

So, because Williams is such hot stuff at hockey facts – and since he's destined to one day play for the Medicine Hat Tigers, after being selected with the fifth overall pick in May's WHL Bantam draft – we decided to put Josh to the "Tigers Trivia Test".

"Name four ex-Tigers who graduated to play in the National Hockey League."

With 35 goals in 25 regular season games for Yale's Bantam Prep squad last season, Williams obviously has a quick trigger finger; and let's just say he nailed every corner of the net in the blink of an eye.

"I pride myself on being up-to-date on my hockey facts," Williams shyly admitted. "Even my grade seven teacher told me I need to read something different besides hockey fact books. But ever since I was a little kid, those are the only books I've really loved." 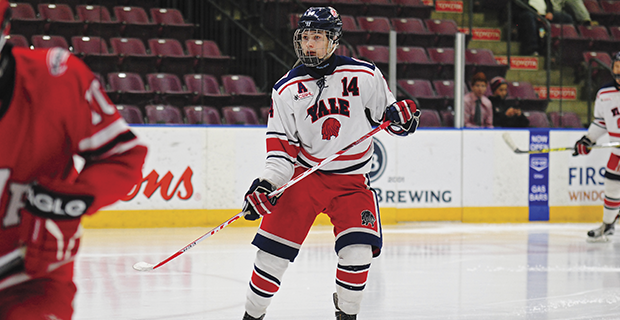 That wouldn't surprise Rihela, as he says Josh's passion for hockey is off the charts.

"The big thing that stands out about Josh is that he's a player who loves the game as much as anybody I've ever coached. There are some days where you have a tough time getting him off the ice at the end of practice. He's a kid who really enjoys the game, loves his teammates and has a real positive attitude."

Standing 6'1" and weighing 178 lbs., Williams is still growing into his young body. But he's projected to be a frightening power forward with heavy duty speed and a golden scoring touch.

"I can create plays, I have a good shot and I can see the ice pretty well," self-assessed Williams. "But I'm not as consistent as I want to be and I'm not as good as I should be game-to-game and shift-to-shift. I can definitely play a little more physical and I need to keep working on my skating."

With that goal in sight, Williams is training with two different skating coaches this summer and Rihela says he's not surprised that Josh is doing everything he can to take his game to the next level.

"Josh's work ethic is definitely something that sets him apart. He competes hard, on and off the ice. If you're in a situation where you’re down by a goal and you need some production, he can really step up in a clutch situation and he did that a bunch of times for us last season."

Yale rode that clutch scoring to a Canadian Sports School Hockey League championship, with Williams serving as an assistant captain.

"He did a really good job in a leadership role," praised Rihela. "He led our group by example and he's one of those kids that, even though they're the same age, the players look up to and it was a real pleasure getting a chance to coach him."

The coach, meanwhile, understands when it's time to let the Academy teachers take centre stage. After all, education is a big part of the program at Yale and with a hefty price tag on yearly tuition for student-athletes in the Bantam Prep program, parents expect to see a few A's mixed in with all those goals and assists. Fortunately, however, Rihela believes that competitive spirit is contagious.

"It's pretty amazing to watch the kids develop in an Academy setting. We're on the ice and in the gym a lot and you can see that work ethic translate to the classroom. What ends up happening is your players start competing when they hit the books and our Bantam team ended up with an 88% grade point average at the end of the season. It's really impressive when you get twenty hockey players turning into A-level students."

Williams is one of those A-level students, with a particular interest in Science.

"I enjoy cold, hard facts as opposed to a more abstract thought process," explained Williams, "and Science is a good fit for that part of my brain."

We're right back to hockey trivia again and, after one more season at Yale, Williams will have plenty of time to brush up on his hockey history (and, don't worry mom and dad, his Science work too) during those long WHL bus trips when he becomes a full-time Tiger in 2017-18; something Williams can hardly wait for.

"I'm really looking forward to the WHL lifestyle. Working out, practicing and being with your teammates every day and sharing the experience of playing together. I wanted to go to a team in a smaller market and play for a team that gets a good fanbase out to the games in a city that really supports their team."

Medicine Hat definitely fits that bill. The Tigers are front and centre in the South Eastern Alberta community, but Rihela believes Williams has what it takes to thrive under the glare of the spotlight.

"Josh is pretty driven. He knows where he's going and I think he'll handle all the attention just fine. He has received a lot of notoriety for a couple of years now from people who recognize that he's a pretty special player and he handles all the publicity very well. On draft day, he was extremely focused. He really wanted to play for Medicine Hat because of all the great tradition with the franchise and I think he's going to be a big-time player for them down the road."

And the answer to a hockey trivia question some day?

Judging by the talent and character of Josh Williams, those chances seem like a pretty safe bet.