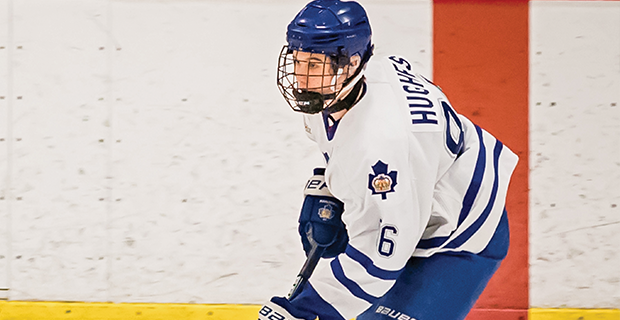 Actually, if you hung around Toronto rinks last season and paid attention to the goings-on of the Greater Toronto Hockey League (GTHL), there's a pretty good chance you do know something about Jack. But for those of you still in the dark… say hello to 16-year-old Jack Hughes, this year's recipient of the HockeyNow Minor Hockey Player of the Year award for Ontario.

To be honest, Hughes is already getting used to life in the hockey limelight. Serving as captain of the esteemed Toronto Minor Midget Marlboros this past season, Hughes put up video game-like scoring stats from his centre ice position: 23 goals and 50 assists for 73 points in just 33 regular season games – the kind of eye-popping production that led some people to compare him to another Marlboro scoring ace, a young gun by the name of Connor McDavid.

"I loved watching Connor play for the Marlies,” recalled Hughes. "I'd go to a game and keep my eyes on him for two straight hours. It was great getting a chance to see him when he was just developing and to watch him progress as a player and a person and to see how well he handles all of his media obligations. Connor brings fans out of their seats and it's fun to think about trying to be that kind of player myself one day."

One day, though, is the big key.

Let's face it: There's only one Connor McDavid and, for now, Hughes and the people around him are focusing on making sure Jack is simply enjoying the game.

"People like to jump on the bandwagon and make a lot of comparisons between players," pointed out Toronto Marlboros general manager Michael Chraba. "But that puts a lot of unnecessary pressure on kids. The truth is, generational players such as McDavid and Sidney Crosby only come along every 10 years or so and instead of making comparisons, we should take each player that comes along and celebrate their own special skills."

And when it comes to Hughes, there's plenty to celebrate.

"Jack is the total offensive package," offered Dennis MacInnis, the founder of ISS (International Scouting Services) Hockey. "He has the ability to be a difference maker in every game he plays. He's a traditional playmaker who creates loads of chances for his linemates.

"When he has the puck, he's one of the most electric players in his age group."

But, as Chraba pointed out, Hughes has a lot of character to go along with his skill level.

"Jack was very well-liked by his teammates and handled his captain duties in a very responsible manner. When you spend time with him, it's obvious Jack comes from a solid family."A solid hockey family.

All three of the Hughes lads are high-performance hockey players; the sons of Jim Hughes, a hockey lifer who spent six years as the Director of Player Development for the Toronto Maple Leafs.

"Jack learned about work ethic at a very young age," explained the elder Hughes. "He's dialled in and has a plan for where he wants to go. He leads a clean lifestyle that focuses on eating well, training hard and getting enough sleep. A lot of kids love the game but you've got to live the game to fulfill your potential."

It also helps to have a front row seat to watch another budding young star fulfill their own potential. 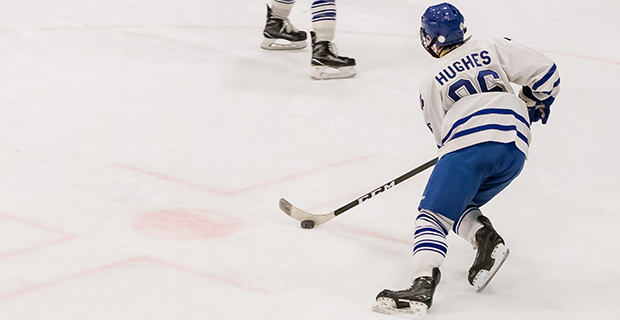 Jack Hughes was expected to go first in this year’s OHL Priority Selection but made it known that he is entering the US National development program next year, and instead went eighth to the Mississauga Steelheads. (Dan Bodanis photos)

"When my dad worked for the Leafs, William Nylander lived at our house for a month or so," Jack recalled. "He was such a nice guy who would take us golfing and out to lunch. It was a neat experience seeing somebody who was so talented carry himself in such a humble way and it was a lot of fun watching him light it up for the Leafs last season."

With a trio of puck-crazed boys all chasing their hockey dreams, life can get pretty intense for the Hughes family. That's why Jim says it's crucial to put a little "fun" into the fundamentals.

"One of Jack's favourite things to do is hit the outdoor rinks with his brothers and buddies. It's great to be out there under the moon and the stars and get away from all the pressure of performing for coaches and parents. They spend hours on the pond playing shinny and it's a fantastic way to decompress and remember what the game is really all about."

Soon, though, it will be back to a more pressure-packed environment. Hughes was expected to go first overall in this year’s Ontario Hockey League draft. Instead, he was selected with the eighth pick by the Mississauga Steelheads. That's because Jack made it known that he was passing on major junior to suit up for the U.S. National U-17 program in Plymouth, Michigan, with an eye on eventually playing in the U.S. college ranks. Jack’s brother Quinton just graduated from the US National development system and will be lacing up with the University of Michigan Wolverines in NCAA Div. 1 men’s hockey this fall. Cousin Teddy Doherty was also in the NCAA and recently graduated from Boston College (the alma mater of dad Marty, another Eagles alum) before joining the AHL and ECHL this past season.

Born in Florida when his dad worked as a coach with the minor league Orlando Solar Bears, the American option is available to Jack and even though he loves the idea of following in his family’s footsteps, he admits foregoing the OHL was a tough decision.

After all, that's the league where the Connor McDavid legend really began to sprout wings.

"We don't mention Connor's name too much around our house," laughed  Jim. "Jack obviously loves watching Connor and all the good young NHL players do their thing. But right now, he's just concentrating on being a kid and not getting too far ahead of himself."
It's true.

The future will take care of itself.

But the present is definitely pretty exciting, as Jack Hughes receives the well-deserved honour of being the HockeyNow Player of the Year.