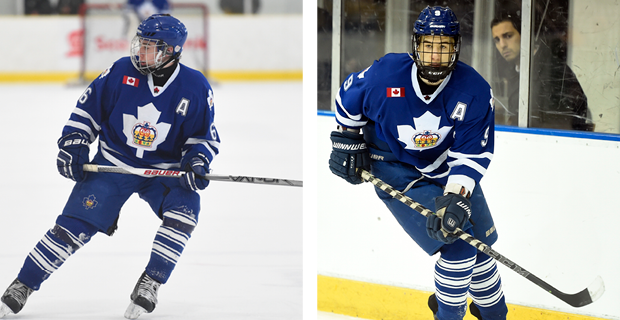 The Toronto Marlboros Minor Midget Team have been a prospect factory for years, producing numerous NHL draft picks from its ranks. Look up and down rosters in the big leagues and there’s a good chance a player came through the Marlboro program.

This year, at least five of players will likely join an NHL franchise’s ranks this June.

It continues the tradition of Marlboros having their names called at the NHL Draft. As one of Ontario’s most well-regarded minor teams, they have graduates drafted each year and some very notable, high-end players like Connor McDavid and John Tavares. This year, the three expected to get picked are looking to join the illustrious list.

Many players have switched minor hockey associations for the Marlboros ahead of their OHL draft year, so while they have spent less time with the organization, they are still alumni who stay in contact with the league.

2018 DRAFT
Quinn Hughes, Ryan McLeod, Akil Thomas, Kevin Bahl and Allan McShane are all ranked within the top 70 of ISS final draft rankings and while they were not all teammates at the same time with the Marlboros during their minor hockey days, their paths crossed often.

Hughes is the top player of the five and could even be drafted in the top of the lottery at the draft. The fluid, mobile defender had a memorable season, playing in both the World Junior Championships, plus the World Championships with Team USA.

Hughes played Bantam AAA and Minor Midget AAA in Toronto before committing to the U.S. National Development Team to work on his progress. Hughes could likely get drafted as high as three to Montreal, but shouldn’t slide out of the top 10.

McLeod, the youngest of three brothers who were all Marlboros at some point, is slotted in at 26 on the ISS rankings. He’s coming off a 70-point season where he was third in scoring for the Mississauga Steelheads. McLeod is a big player who just missed the 2017 NHL Draft cutoff by mere days.

Thomas, who was chosen 12th overall in the OHL Priority Selection Draft, is ranked at 27 and should have his name called towards the end of the first round or early in the second.

Born in Florida, Thomas moved around as a kid following his father, Kahlil, a pro hockey player for over a decade in a career that took him around North America. He’s homegrown with the Marlboros, playing PeeWee AAA, Bantam AAA and Minor Midget AAA. Last year with the Niagara Ice Dogs, Thomas had 81 points in 68 games.

Also a centre, the 63rd ranked Allan McShane played Bantam AAA with the Marlboros, spent the next year with the Jr. Canadians, then returned to team up with Thomas and Bahl in his OHL Draft year. It paid off as he was selected 19th by the Erie Otters. In the midst of his rookie year, McShane was traded to the Oshawa Generals, and this year he broke out with 65 points in 67 games.

Bahl is a big defender, listed at 6’6 and 230 lbs. – a size that have scouts dreaming of him becoming a stout, shutdown blueliner. He doesn’t have much offence, but ISS ranked him at 68 and they project him to be a bottom-pairing NHL guy. In two seasons with the Ottawa 67’s, who drafted him in the second round, Bahl has just one goal each year, but his points jumped by 14 from his rookie campaign.

ALUMNI
Having former players drafted into the pros in nothing new for the Marlboros, with several notable names over the years and more expected to come. Of course, the most popular is McDavid, but Brent Burns, Rick Nash and Jason Spezza only increase the reputation.

Last year, three players were chosen, headlined by Matthew Strome in the fourth round. The year before that, Michael McLeod (first round, 12th overall) was followed by three others.

In fact, there have been at least two or more Marlboro alumni drafted every year since 2007, highlighted by a high of eight players that went in 2012.

Looking to next year, the likely No. 1 pick in 2019, Jack Hughes, spent his Bantam AAA and Minor Midget AAA days with the Marlboros.

Brother to Quinn, Jack is a generational talent who won the scoring title by a large margin this season – after being selected as our 2017 Ontario Player of the Year. A teammate of Thomas, McShane and Bahl who has a late-2000 birthday, Danil Antropov should also be drafted.

As the 2019 Draft gets into the focus next fall, more former Marlboros will likely be heralded as potential draft choices.

With a great track record of developing players and sending them to the next stage of their hockey careers, it’s no wonder that top prospects want to pull on the Marlboro jersey, even just for a year.