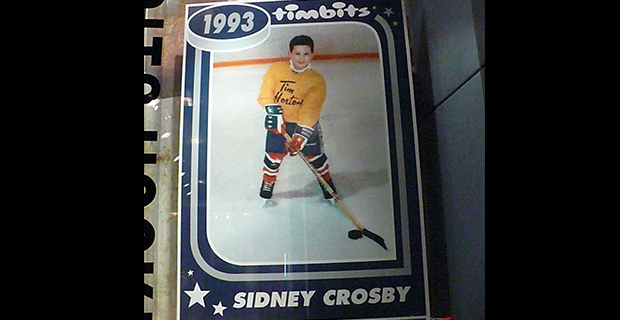 Does he have a steady girlfriend?

What are his hobbies and interests away from the rink?

Would he vote for Donald Trump?

These are some of the questions about Sidney Crosby, a notoriously private hockey superstar, that we don't have definitive answers for. But all the facts that truly matter are already on the record and if Crosby takes another tour around the ice this month carrying his second Stanley Cup, every hockey fan knows that "Sid the Kid's" journey all began in Cole Harbour, Nova Scotia.

Cole Harbour - Population 25,161, and the jumping off point for one of the greatest players in NHL history.

Remember that creative Reebok television commercial a few years back? The one featuring Crosby and his Penguins teammate at the time, Max Talbot, staging a shooting contest by firing pucks into an old clothes dryer down in the Crosby family basement?

That appliance should really be in the Hockey Hall of Fame because, from the oh so tender age of two years old, Crosby honed his wicked shot by taking aim at the family dryer. He also slapped more than a few shots at his father, Troy Crosby. Troy, you see, was a pretty solid goaltender in the Quebec Junior ranks in the mid-80's - so good, in fact, he was a late round draft pick of the Montreal Canadiens. Troy never played in the NHL but his son definitely put the Crosby name on the map, honing his skills in the Nova Scotia minor hockey ranks.

That was Crosby's amazing scoring line in 2003 for the Dartmouth Midget Subways - a squad that finished runner-up in the battle for the Air Canada Cup that season. A few years later, Crosby was also the bridesmaid, graduating to junior hockey with the Quebec League Rimouski Oceanic but running into the London Knights juggernaut in the championship tilt at the 2005 Memorial Cup.

Sidney was second again, losing in the Stanley Cup final to the Detroit Red Wings. But the very next season, 2009, Crosby was finally crowned a champion as the Pittsburgh Penguins got their revenge on the Red Wings, winning the series in seven thrilling games. On August 7th, 2009, Crosby brought the Cup home to Cole Harbour, celebrating his 22nd birthday with a huge Stanley Cup parade in front of thousands of hometown fans; a party that even included a concert by Canadian rock star Sam Roberts.

Speaking of rock stars, Crosby's reputation continues to soar right through the roof. A leading Conn Smythe Trophy candidate as playoff MVP, Crosby is being credited for being the perfect captain. Reporting for duty at optional skates during the long and tiring postseason grind; taking the media pressure off Phil Kessel so 'Phil the Thrill’ can concentrate on putting the 'biscuit in the basket' instead of turning into a basket case dealing with nosy reporters; and making sure rookie netminder Matt Murray continues to feel confident in the crease, while helping veteran goalie Marc-Andre Fleury still feel like he's a vital piece of the Penguins puzzle.

Fleury, remember, was a huge part of Pittsburgh's '09 Cup victory. He was also having a sensational run this season before suffering a concussion late in the year, opening the door for Murray to strut his stuff. Fortunately, in addition to benefitting from Crosby's support and friendship, Fleury happens to be one of the nicest guys in the game. Serving as the play-by-play announcer for Sportsnet's CHL telecasts in the early years of the network, I had a chance to cover Fleury when he was a budding netminding star with the Cape Breton Screaming Eagles of the QMJHL.  To this day, I can still recall Fleury's omnipresent smile; a perma-grin that he's kept plastered on his friendly face throughout all the ups and downs (including some rather rocky play-off performances) that he's experienced wearing the pads in Pittsburgh over the years.

Crosby's leadership and support of Fleury and Murray has been one of the big stories bubbling below the surface when it comes to this year's play-off success of the Penguins. Like Crosby (and yes bitter Leaf fans, your old buddy Phil Kessel), Murray has to be considered a Conn Smythe candidate. He's come a long way from Thunder Bay, Ontario, where ex-NHL'er Lonny Bohonos recalls coaching Murray in the Bantam ranks. Bohonos says Murray, an extremely  confident and competitive kid, even got upset when his teammates would score on him in the fun, end-of-practice shootout drills.

So, from Sidney Crosby's character and leadership honed in Cole Harbour; to Marc-Andre Fleury's winning grin and affable personality developed in Cape Breton: to Matt Murray's competitive fire stoked in Thunder Bay… Here’s to the Pittsburgh Penguins. A cross-country cross-section of hockey players that have the Penguins on the brink of another Stanley Cup celebration.