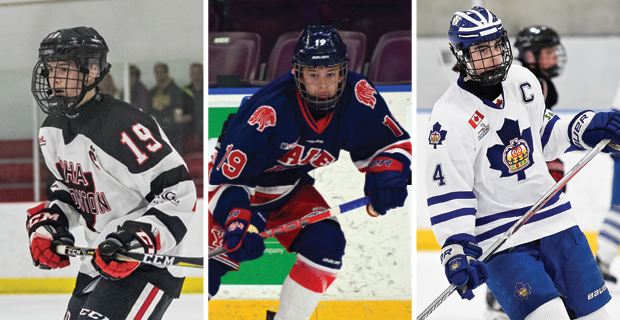 A hockey player’s evolution, to a degree, takes place on a ladder. It involves a long, at times daunting, climb up the rungs to the player’s ultimate goal.

A league or provincial championship. A spot on the national team. A pro career. A Stanley Cup.

With huge assists coming from their parents, coaches and teammates, they go as far as their skates and sticks will take them.

Along the climb, there are rungs marking great achievements in a young player’s development.

It is here, then, that three budding stars can call themselves the 2018 HockeyNow Players Of The Year (POY) powered by HockeyShot.

They join a growing number of players who, after being named HockeyNow POYs, have made careers out of achieving the next level, climbing to the very top of the ladder.

Karl Alzner, Mathew Barzal, Curtis Lazar, Ryan Nugent-Hopkins and Morgan Rielly are a few of the more notable HockeyNow POY alumni. All are established NHLers at the top of the hockey ladder.

It may look to be a long way up, but this year’s POYs realistically don’t have far to go from here to get there. And they are well on their way.

Chiasson, 15, is making huge strides playing for the Yale Hockey Academy in Abbotsford, B.C. The 6-foot-1, 165-pound forward counted 20 goals and 48 assists in 30 CSSBHL games with Yale this past season, and added a goal and two assists in four games with Yale’s Prep squad.

Tschigerl, meanwhile, scored 31 goals and added 39 assists for the Okanagan Hockey Academy’s Edmonton team in the CSSBHL this past season. The 15-year-old forward also saw some Prep action for OHA Edmonton, scoring twice in two games.

Sixteen-year-old Drysdale lit up the Greater Toronto Minor Midget Hockey League this past season with eight goals and 42 assists in 57 games. The 5-foot-11, 154-pound  defenceman is showing great puck-handling skills that complement his innate hockey sense.

How do we know all this?

It starts with International Scouting Services (ISS) founder and Director of Scouting, Dennis MacInnis, who plays a significant role in determining the HockeyNow POYs. Winners of the award show "leadership, hockey ability and school and community participation.”

“I would like to congratulate all three young men on being selected regional HN Players of the Year. This year’s candidates overall were exceptional; what separated Jamie, Jake and Sean besides their obvious on-ice skill was their tremendous character and leadership abilities both on the ice and in their communities. All the best as you start your young hockey careers.”

A final nomination list of players is tabulated and a trio of players from three provinces are then selected as the ultimate winners.

So here’s to the parents and coaches who’ve put these players in a position to continue their upward trajectory. While winning HockeyNow’s POY award is a step in the right direction, there are more rungs on the climb ahead.

No telling where their climb will end. But, the sky’s the limit.

2018 AB HOCKEYNOW PLAYER OF THE YEAR

2018 ON HOCKEYNOW PLAYER OF THE YEAR