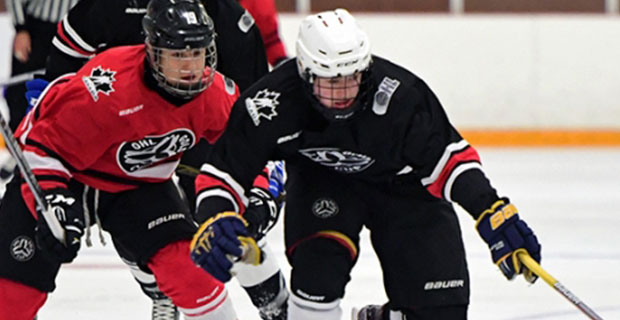 The OHL Gold Cup, part of Hockey Canada’s Program of Excellence is heading into the semifinal rounds and has seen some top notch talent from this year’s Under-16 players from the GTHL, OMHA, HEO, ALLIANCE, HNO and NOHA.

After two days of action, Team GTHL Red is undefeated (3-0) to start the tournament cementing them at the top of Group B and overall standings as the only all-win team. In Group A, Team HEO and OMHA White both have two wins and are tied at the top of their group.

Semifinal Saturday kicks off with NOHA vs GTHL Blue. NOHA is looking for their first win and GTHL Blue looks to keep a strong tournament going where they already have two wins. GTHL Blue will look for Philip Tomasino to stay hot as he’s tied for the tournament lead in goals after his hat trick performance in his second game. The loser of this game will play the loser of the HNO vs Alliance game and the winner will play the victor of that matchup.

Team Alliance will battle Team HNO in the second game of the day with another case of a team looking for their first win, HNO’s best outcome so far is an overtime loss. Alliance is looking for their third win and a date with the probable GTHL Blue in the most likely matchup for the first game of winners on Sunday.

It’s the same scenario for the last two games on Saturday where the losers play losers and winners play winners. In the first game, it’s a battle of the two-win teams as Team HEO will face off against OMHA Black, who are both 2-1-0-0. We can probably expect a high scoring affair where both teams have multiple point producers. HEO will look for the tournament leading offensive defenceman Alex Hogue to keep up his point production after earning five points (1G, 4A) in three games. OMHA Black has had three players (Hayden Fowler, Spencer Hazell and Cameron Warren) score three goals apiece, tied for the tournament lead.

OMHA White and GTHL Red will face off in the final matchup of the day. GTHL Red only has five goals scored against them and have posted 14 goals of their own through the three games. They have four players with four or more points under their belts (forwards Jamieson Rees, 5 points, Ty Jackson, 4 points and Lucas Rowe, 4 points, as well as defenceman Anthony Aguanno, who has 4 points). OMHA White counters with only one player with four points in Jacob Winterton and will hope he can produce enough to get them to the winners table.

The puck drops on the Consolation Semifinal 1 game at 10:00am EDT. Stay tuned to HockeyNow for the latest news from the OHL Gold Cup.