Growing up with Mr. Hockey 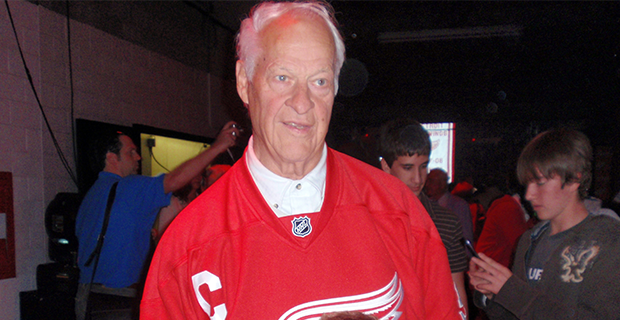 That was the title of a 1963 book that I took home from the school library dozens of times. It was an instructional guide written by Gordie Howe that contained a bunch of great hockey tips from Mr. Hockey himself.

One of Gordie's biggest beliefs?

The importance of playing the game with a short stick.

Standing six feet tall and weighing over 200 pounds, Gordie was one of the biggest players in his NHL hey day. But he'd regularly chop 4 or 5 inches off the top of his stick, believing the shorter shaft gave him more control of the puck. It was obviously a pretty good game plan, as Howe racked up 1,850 NHL points, fourth on the all-time list, and he later added another 508 points in the World Hockey Association.

And believe me, Howe was passionate about his 'short stick' method.

The first time I interviewed Gordie was in the 1980's when I was working as a rookie reporter for a local television station in Calgary. Gordie was conducting a kids hockey clinic for one of the numerous charities he supported over the years, and just before stepping in front of the camera to answer my questions, he couldn't help himself.

"Hey there, pal," Howe barked at one of the youngsters heading on to the ice, "You better get back in the dressing room and find a saw. That stick is way too big for you!"

Mr. Hockey's message that day was delivered at the Saddledome in Calgary; just a stone's throw from the Stampede Corral, the original home of the NHL Calgary Flames and the historic old barn that also housed the WHA Calgary Cowboys. The Flames have always received solid fan support in Calgary, but the Cowboys struggled to draw people and managed to stay alive for only two years.

But for one night in the mid-70's, the Corral featured "standing room only.”

Gordie Howe, you see, was coming to town with the Houston Aeros and Calgary hockey fans were pumped about getting their first look at the living legend. I was in the stands with my dad that night, thrilled that he was able to get his hands on a pair of hard-to-get tickets.

All of a sudden, however, that excitement turned into massive disappointment.

"Ladies and gentlemen," the p.a. announcer intoned as the two teams skated on the ice for the pre-game warm-up, "We regret to inform you that Gordie Howe will not be in the Aeros line-up tonight, as he is back in Houston nursing a sore wrist."

I've never seen a crowd react with such anger.

It was the living, breathing definition of an "angry mob.” Hundreds of rolled up programs hit the ice, as a cascade of boo's reigned down from the rafters. A number of people, in fact, stomped out of the Corral, since the only reason they'd been there in the first place was to see Gordie Howe in the flesh.

I'd have to wait a number of years (until that Saddledome clinic) before I got the chance to see Mr. Hockey up close and personal. A few years after that, I had another opportunity to interview Gordie when he passed through Calgary promoting  an excellent book he co-wrote with his wife, Colleen, and an author by the name of Charles Wilkins. It was called "After the Applause,” and tells the tale of a number of hockey legends, such as Howe, Bobby Hull and Phil Esposito, and how they dealt with their lives away from the limelight once their hockey careers had come to an end.

The great love story between Gordie and Colleen has been well-documented and when they walked into our Calgary TV studio to conduct our sit-down interview, you could sense the great respect and admiration they had for each other. During the interview, Gordie often deferred to Colleen, stressing that she was the real brains behind the book project.

Unfortunately, after a ferocious fight against dementia, Colleen passed away in 2009 at the age of 76.

Today, Gordie Howe passed away at the age of 88, waging his own battle against dementia over the final years of his life.

However, the memories of Mr. Hockey will go on forever.

A teenage kid out of tiny Floral, Saskatchewan who only asked for a Red Wings team jacket as a signing bonus when he joined the Detroit organization in 1945.

A 52-year-old who still had the skill to score 15 goals with the Hartford Whalers in his final NHL season back in 1980. (Think about that, folks. I'm 52 years old and can barely keep up with my 10- and eight-year-old sons when we lace up the skates to play shinny. Gordie, meanwhile, played his final years of pro hockey wearing the same uniform as his sons, Marty and Mark.)

But most of all?

I'll remember Gordie Howe as a classy legend and a true gentleman who came exactly as advertised.

And here's to Mr. Hockey.