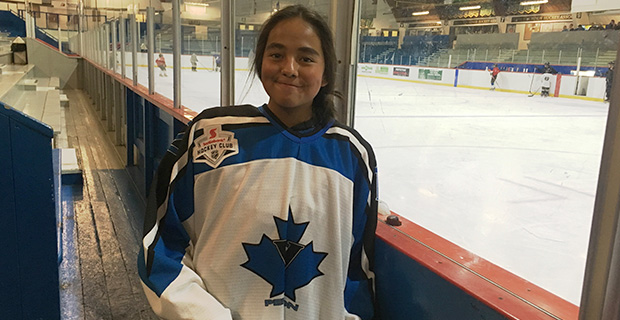 Penticton’s Meadow Arcand-Squakin was able to afford to play rep hockey this season thanks to a grant from the Grindstone Foundation. (Submitted photo)

One of the Grindstone award recipients, Isabelle Fortin said it best.

She is one of 10 young female hockey players across the country who will get to continue her journey on the ice thanks to funding from the Grindstone Award Foundation.

The Grindstone Award Foundation is a charity that enables young female players to participate and improve their skill development in the sport of hockey. The intent is to provide support to communities across Canada and address the needs of players who have a desire to play, but are unable to for financial reasons. The foundation provides grants to female players under the age of 19 who have expressed a desire to pursue their goals in athletics. The selection process is based on financial need and desire, not on hockey ability.

Fortin not only received the award to help her with costs associated with playing the sport she loves, but she also got to skate with the USPORTS UBC Thunderbirds women’s hockey team during their warmup and dropped the puck in a ceremony at the exhibition game against the Canadian Women’s Hockey League team Kunlun Red Star.

“This was a wonderful opportunity to work together with UBC to increase awareness of the charity and female hockey so we can reach more families in need,” said Danielle Grundy, president of the Grindstone Foundation.

Greg Burke said his 16-year-old daughter Makenna would have not been able suit back up if it wasn’t for the Grindstone Foundation.

“It’s been a difficult couple of years for us. It’s tough at the level of hockey my daughter is at. She had to step away the last two years because we couldn’t afford it,” said Burke.

In the spring Makenna’s former team manager reached out to the Burke hoping to get her back on the ice in Thunder Bay.

“I had scrimped and scraped trying to raise the funds, doing everything I could to get her back on the ice,” said Greg.

Then he was forwarded a link to the Grindstone Foundation website and immediately applied. After two years of missing hockey, Makenna is back in net for the Thunder Bay Queens midget AA team.

“Hockey has been my daughter’s life since she was seven years old. The change in seeing her going back to playing is remarkable,” said Greg. “It is just her overall being. Her wholeness. It is almost like something had been missing from her the past couple of years and now she is back to 110 per cent. She is doing well in school, just everything. She just loves hockey.”

Greg said his daughter hopes to attend nursing school once she graduates from high school. She also dreams of continuing to play hockey.

“Without this award, and a number of others that we had to rely on, I highly doubt she would be back playing again. The Grindstone made it all happen.”

After a few years of trying to make a Penticton, B.C. boys rep team, Meadow Arcand-Squakin got word that this season she made it.

However, with more travel it would mean greater financial challenges for her family.

“She started working a few summers ago to help with her sports expenses, she knows how much it costs to play and wanted to help,” said her mom Jamison. 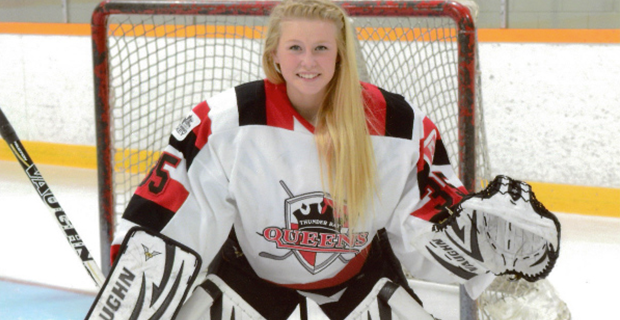 Goaltender Makenna Burke is back between the pipes after a two-year hiatus from hockey. Due to financial constraints she was unable to play, but a grant from the Grindstone Foundation is making it possible this season. (Submitted photo)

Now finally reaching her goal of being on the rep team, the family knew the costs would be weighing heavy over them.

“I saw this grant and had applied for it because it seemed like we fit the guidelines quit well. The timing couldn’t have been more perfect because we found out Meadow had a spot on the team then this came through. I don’t think we could have done it financially without the support of KidSport, the Penticton Minor Hockey Association financial assistance and the Grindstone grant,” said Jamison.

It is a proud moment for the family. Meadow gets to play her final season of boys hockey, before she moves over to the female stream with her cousin. The same one that inspired her to play originally eight years ago.

“My family comes from a hockey background. The boys all played rec hockey while the girls grew up suiting up their brothers, driving them to practices and taking care of them,” said Meadow’s mother. “We saw this relationship the men all built in our family around hockey and how hard they worked but it never dawned on me that I could have that.”

It only took watching her cousin play for Meadow to be hooked on hockey.

“Right away she said that is what I want to do. So we got her into skating and made it happen. We had such positive support from our local hockey community and then my family. It is so great to see her grandfather, uncles, cousins and family supporting her. Our family is really proud of what she has done, making this rep team after trying out so many times. It is empowering for her,” said Jamison.

The 14-year-old fits the Grindstone mould perfectly. As she too wants to see women’s hockey advance. She had a few words of advice for girls to keep playing the game as long as they love it.

“I’ve been at points thought of quitting felt like the worst player but I just kept working on it. Just stay in there,” said  Arcand-Squakin. “Girls hockey is something that should be more progressed. Look at Hayley Wickenheiser, she is so good and is one of the best women’s hockey players. It shows women can be great hockey players.”

The Grindstone Foundation held their first annual charity weekend in West Kelowna, B.C. in July. The event brought over 180 players for the tournament and Girls Rock the Rink event. They doubled their fundraising goal and raised over $10,000 to support young girls’ dreams of playing hockey this season.