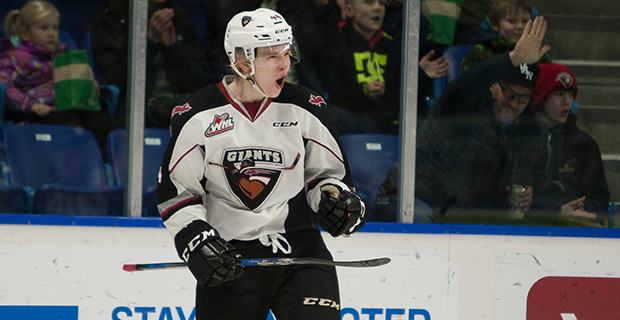 Playing under the heat and light of Major-Junior hockey with the WHL's Vancouver Giants clearly agrees with 2016 HockeyNow POY for Alberta Bowen Byram. (Chris Relke/Vancouver Giants)

One season, to be exact.

When selected as the HockeyNow 2016 Player of the Year (POY) for Alberta, Bowen Byram was coming off a productive Bantam season (22 goals, 37 assists in 34 AMBHL games) with the Lethbridge Golden Hawks.

Since then he’s gotten bigger, stronger, faster and tacked on another level of hockey smarts.

The six-foot, 180-pound defenceman who turned 17 in June is now doing it up with the Western Hockey League’s Vancouver Giants. The Cranbrook, B.C., Minor Hockey product and graduate of Yale Hockey Academy in Abbotsford, B.C., is definitely enjoying the ride.

“After being selected as HockeyNow Player of the Year for Alberta, I played Midget Prep at the Yale Hockey Academy and had a good year, and played 11 games with the Vancouver Giants as an under-age player,” Byram recalls. “This year, I played my first full year with the Giants and had a pretty good year. And now, I’m just getting prepared for a pretty good year in my (NHL) draft year.”

The progression has been rapid; the time frame condensed. He scored six goals and added 21 assists in 60 games during his first full WHL campaign with Vancouver this past season. He carded three goals and four assists in seven Giants post-season tilts.

“It’s definitely different from Midget and Bantam,” Byram says of adjusting to elite hockey at the Major-Junior level with the Giants. “It’s a lot of hockey, you play a lot of games. It’s also a lot of fun.

“It was a fun first year, and a great learning experience.”

It’s clear he’s been soaking up as much as he can in his formative days at the next level.

“Bowen is a smooth-skating defenceman who shows poise and confidence beyond his years,” says Brent Parker, Western Canada Head Scout for International Scouting Services (ISS), who got the drop on Byram early in the player’s development before providing the intel necessary for HockeyNow to name him its 2016 POY for Alberta. “He is not afraid of the moment, and he has a real presence when he is on the ice.”

Still, Byram admits adjusting to playing in the spotlight of Major-Junior hockey can be intense.

“It’s a crazy jump. You’re playing against some of the best players in the world that are under the age of 20 -- guys like Dillon Dube, who was captain of Canada at the World Juniors,” Byram observes. “We played his team (Kelowna Rockets) eight times this year. You’re playing against men, and being a 16-year-old guy, it was a challenge. But it was also a lot of fun and very good for my development.”

Byram, like Dube, is in the Hockey Canada stream, and has skated for both the U17 and U18 teams at tournaments in Canada and abroad.

He racked up a goal and four assists in six games with Team Canada Red at the World U17 Hockey Challenge in Dawson Creek, B.C., last November before putting up an assist in five games at the International Ice Hockey Federation U18 Championship in Russia in April. He returns to Hockey Canada’s U18 selection camp at the end of July.

“It’s pretty cool to represent your country and play for your country,” Byram says. “It’s an incredible feeling getting to skate in those colours.”

Once summer hockey ends, it’s back to the Giants for his second full WHL season playing for a franchise located in a large hockey market. The upcoming year also happens to be Byram’s first season of NHL draft eligibility.

“I have to keep working hard. I identify myself as a hard-working guy who comes to the rink every day and works hard. That’s a big part of my game. I just have to keep doing what I’ve been doing,” Byram says. “If I can build off last season, I can put myself in a good position to hopefully go in the draft to a team that likes me and wants me. As long as I keep working hard and believe in myself, I should have a good chance when the time comes around.”

ISS scout Parker feels Byram’s trajectory, and timing, put him in a good spot in his NHL draft year.

“Bowen really fits the new-age style of defencemen that are becoming so prominent in the NHL, and I have no doubt he will take that step in the near future.”

He’s come a long way in a short time. But HockeyNow 2016 POY for Alberta Bowen Byram is embracing the challenge and forging ahead with his game which, at some point, could end up in the NHL.

It really doesn’t take long. At all.