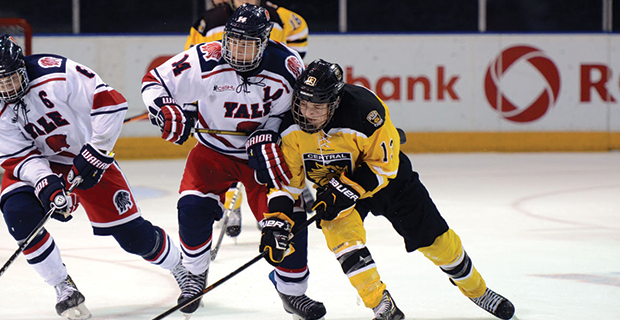 The Yale Hockey Academy in Abbotsford, B.C. and the Burnaby Winter Club are two of eight hockey schools currently competing in the CSSHL's Elite 15s Division. (Photo by James Dewar/stinkylockers.com)

The Canadian Sport School Hockey League inaugurated in 2009, but it was in 2013 when the league went through major expansion and also introduced the formation of the Elite 15s Division that it really took off.

The only single-age division in the CSSHL, the Elite 15s Division, was created to allow elite level 15 year olds the chance to develop as student athletes within their own age group.

The division proved to be an instant success with seven programs taking part that inaugural year.

“The division filled a big void specifically in British Columbia for players,” said Leland Mack, who has coached the BWC Hockey Academy Elite 15s team since its inception. “The division is very competitive and the player development results speak for themselves. The hockey world at times believes that it is a race to get to junior hockey or the NHL, the E15 division has proven that it is a journey and player development is what actually matters.”

The majority of Elite 15 players move up to the Prep Division the following year. However, a select few make the jump straight to Junior A or Major Junior. Eight players from the 2013-14 Elite 15s Division season did just that, including current Calgary Hitmen defenceman Jake Bean. The 2014 Top Defenceman Award winner who was passed over in the WHL Bantam Draft is a projected 2016 NHL first round pick, just two years removed from the CSSHL.

“The CSSHL was a great stepping stone for my career,” said Bean. “It gave me the opportunity to grow my skills and focus on school as well as compete in a junior hockey like atmosphere.  The calibre of players and coaches pushed me every game to improve and develop into the player I am now.”

Twenty-two players in total from that inaugural 2013-14 season are now full-time AJHL or BCHL players, with five of them already committed to NCAA programs. Eight players are currently playing in the WHL.

“With us at BWC, we had two players from our inaugural season - Spencer Hunter and Ryan Hogg - that went straight from E15 to the BCHL” added Mack. “Playing E15 didn't hurt, but rather helped their personal development.  Two more examples from our program are Angus Crookshank and Liam Watson-Brawn. Both were not highly touted bantam players, in fact Watson-Brawn was the 10th forward on his bantam team, but both played E15 last season and now play in the Prep Division, while both have BCHL commitments for next season. Without the Elite 15s Division, who knows where their development path would have taken them.”

After a successful 2014-15 season, the division appears to have taken another step forward this year. The division welcomed its newest member, the Northern Alberta Xtreme (Edmonton, AB), making it an even eight teams along with BWC, Delta Hockey Academy, Edge School (Calgary, AB), Okanagan Hockey Academy (Penticton, BC), Pacific Coast Hockey Academy (Victoria, BC), Pursuit of Excellence (Kelowna, BC) and the Yale Hockey Academy (Abbotsford, BC).

A total of 16 players selected at the 2015 WHL Bantam Draft, including a trio of second round picks, chose to call the division home this year.

“Playing inside your age group for one additional season before the challenge of playing against older, stronger players is very beneficial for all players,” said Mack. “The addition of the Northern Alberta Xtreme has strengthened the division even more and it should be a competitive and exciting CSSHL Championship Weekend in Penticton this March.”