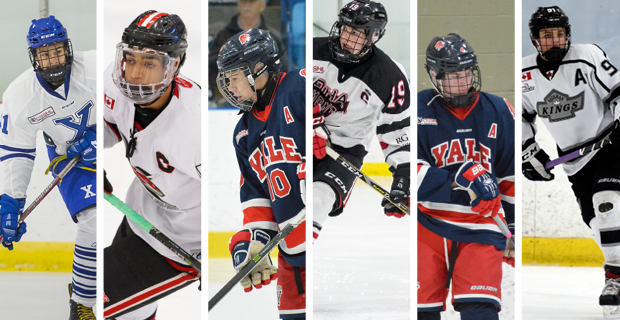 Meet some of the prospects, and Player of the Year finalists, set to make their mark in the OHL and WHL

A new crop of talented players is bound to hit the Canadian Hockey League (CHL) and major junior hockey, many bound to be stars in hockey for years to come.

The draft is the first process as players move on from minor hockey, but the skaters must also weigh their options of going the Major Junior or college route.

HockeyNow spoke to a few top players across the country who are considered for the WHL draft or were recently selected in the OHL draft. All of these players are also among the final 10 in their province for our Minor Hockey Player of the Year honour. 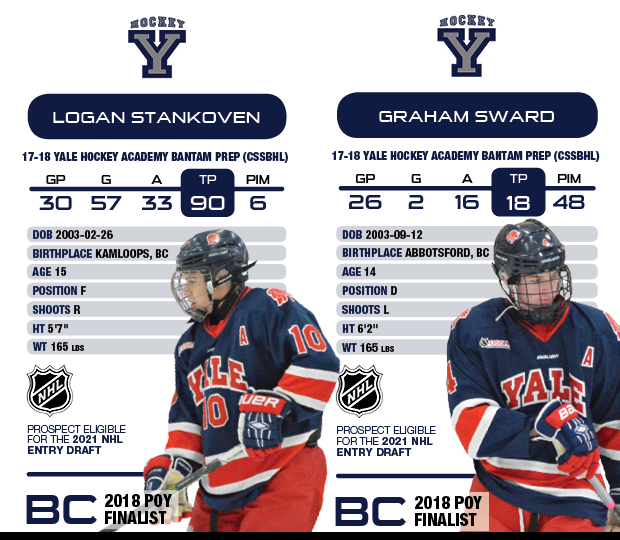 BC
Out west, Yale Hockey Academy had a talented team of 2003s in the Bantam Prep division of the Canadian Sport School Hockey League (CSSHL) that featured seven of our Player of the Year nominees.

Two that are expected to be drafted in the top 10 or 15 to the WHL are Logan Stankoven, a skilled forward who can score in bunches, and Graham Sward, a big defenceman with tremendous skating and a fantastic breakout.

Stankoven is a smaller forward, something he acknowledges, but points to a few NHL players he liked to emulate.

“Brayden Point or Johnny Gaudreau, I’ve always liked those guys. They’ve both got good work ethics and obviously they can put the puck in the net and they’re skilled, but they’re also smaller like me. I try to kind of model my game after them,” Stankoven said.

Last season with Yale, Stankoven led the CSSHL in goals with 57 in just 30 games, and he ranked third in scoring with 90 points. His goal scoring crown came down to the final game, but he said it wasn’t something he was aware of.

“I didn’t really know about it until after the game. It was nice to end off the season with a positive remark,” Stankoven said.

On May 3, the WHL holds their Bantam Draft, selecting players at 15 years old, one year younger than the OHL and QMJHL.

“It should be interesting to see where everyone goes. It’d be nice to get drafted by Kamloops obviously, but if it doesn’t happen, it’s not the end of the world,” Stankoven said.

With the Blazers choosing at five, there’s a chance they draft Stankoven. Online rankings ahead of the draft have Stankoven anywhere from second to sixth.

Yale teammate Graham Sward will likely be selected close to Stankoven. Has there been discussions between the two or a bet wagered? Sward said there wasn’t.

Playing at Yale makes sense for Sward, a native of Abbotsford where the academy is located.

He’s had his eye on the WHL for quite some time after his cousin spent time in the league, but Sward wouldn’t tip his hand if there was a preferred draft destination.

“It’s an honour to be selected anywhere,” Sward said. “They like your game better than anyone else they saw all season. It’s such a huge compliment. The guys that say no to a bunch of teams, I’m not like that.”

Asked about a player comparison, Sward pointed to the bruising Shea Weber – strong with a big shot, but mentioned he tries to stick to his game.

“I kind of like to play my own style, because you don’t get too much done when you’re trying to be someone else. I play to my strengths and try to be the best I can for my team,” Sward said

Next season, Sward will jump to Major Midget to join the nearby Fraser Valley Thunderbirds. 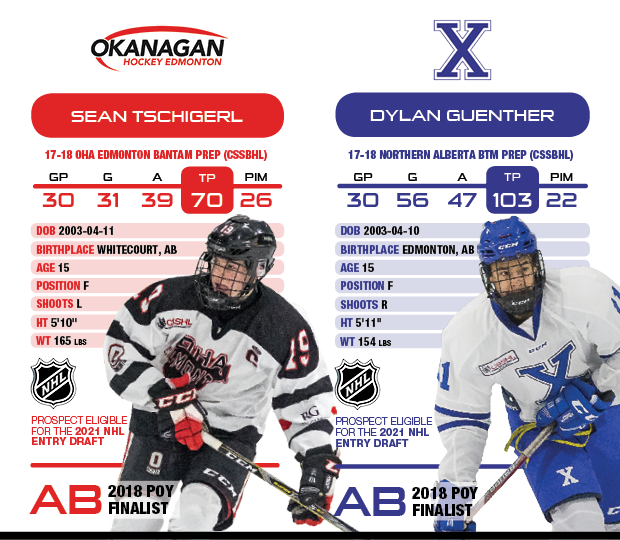 ALBERTA
Hockey academies are on the rise in Alberta, and it’s very evident if you look at some of the best top prospects for the upcoming WHL Draft.

With the Oil Kings selecting first, they could continue their recent draft trend of choosing local kids by going with Guenther, a sniper who had 56 goals and 103 points, second and first respectively.

Jonathan Toews is a player he looks up to, but noted his heavy shot may draw comparisons to another player.

“I think my shooting is my No. 1 skill on the ice, and my ability to find quiet, open ice to make time for my shot and release,” Guenther said.

“I think I play like Patrik Laine a little bit, he’s a big winger and has a great shot and I think I’ve got a similar gameplay to him.”

Playing alongside uber-talented and 2004-born Matt Savoie was a great opportunity for Guenther as the two had amazing chemistry, demonstrated by their 1-2 finish in the scoring race. They were also the top two scorers (reversed positions) in the prestigious John Reid Memorial Tournament.

Earlier in April, Guenther tried out for NAX’s Midget Prep team in hopes of sticking around next year.

“We had tryouts so I hope to stay there and join the Midget Prep team. They had a real good team last year so I hope to make that. [Matt and I] are going to try to make that team and stick together again.”

Four spots behind Guenther in the scoring race was Tschigerl who had 31 goals and 39 assists for 70 points, first on OHA.

The Whitecourt native capped his year with the CSSHL Bantam Prep Championship, alongside several other accolades, humbly, he noted his teammates made his year so special as “the team we had was full of exceptional kids and great friends.”

Like Guenther, Tschigerl looks up to the Blackhawks star. As OHA’s captain and top centre this season, it’s no surprise why.

“I try to model my game after Jonathan Toews,” Tschigerl said. “He’s a great leader with great work ethic and someone I aspire to be like.”

Looking at the draft, Tschigerl could likely be picked anywhere from first to fifth – some mocks have him going second to Kootenay. However, Tschigerl said there is no teams ranking higher on his list than others.

“I’m trying not to focus on it too much. I’m just focusing on my own playing. It’s going to happen and I’ll work hard and hope all goes well. I’m happy just to get drafted. It’s an honour to get drafted and that’s what I look forward to,” he said. 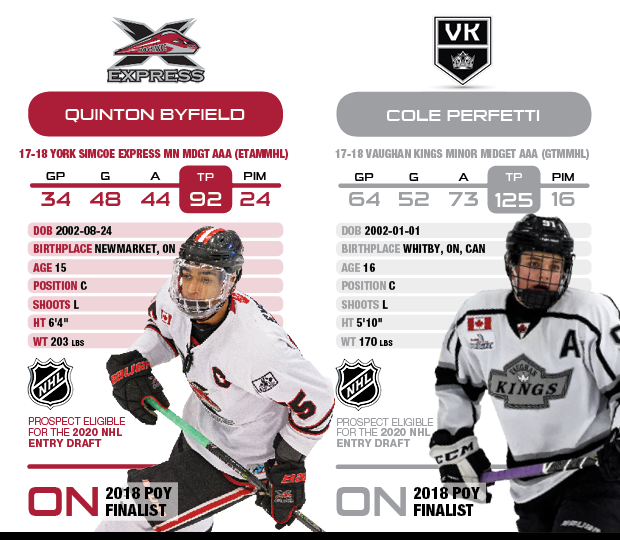 ONTARIO
Two players who led their respective Ontario leagues in scoring were chosen at the top of the OHL draft at the beginning of April. Quinton Byfield went first to the Sudbury Wolves, while Cole Perfetti was selected fifth overall by the Saginaw Spirit.

After a prolific season where he scored 125 points in 65 games and led the Greater Toronto Hockey League (GTHL) minor midget circuit by 12 goals and 36 points, it’s no surprise that Perfetti of the Vaughan Kings was a top OHL pick and on the shortlist for HockeyNow’s Player of the Year honours in Ontario.

The 16-year-old tweeted his commitment in the fall of 2017 and said Michigan has held his interest for a long time.

“I’ve always loved the University of Michigan ever since I was little. I’ve always watched the football, hockey and basketball games. My dad was an avid Michigan fan and it kind of stuck on our whole family. The campus in Ann Arbour is beautiful. When I saw it for the first time I fell in love with it and it was awesome,” Perfetti said.

From Whitby, Ont., Perfetti played five games with the Junior A Fury and didn’t miss a beat, scoring six points in five games. He noted two elite centres as players he admires.

“One is Auston Matthews. He never makes a mistake, plays a 200-foot game, and still puts up big numbers and makes everyone better. Jonathan Toews because he’s a good leader, puts up points even though he’s so good down low and in his own zone. He’s on the ice in any situation.”

Next season is still a question mark for Perfetti as he can play Junior A in Ontario, head to the United States Hockey League (USHL) depending who drafts him, or break a college commitment to head to the Spirit, but don’t bank on the latter.

Holding the first overall pick, the Sudbury Wolves had the chance to turn their franchise around, and it sounds like they may have done just that, selecting the hulking 6-4 Byfield.

He had 48 goals and 92 points in 34 games, leading the league in both categories as well as assists. Byfield said there was no doubt in his mind to head north and join Sudbury.

“That was the main place I really wanted to go. I think it’s a great place and organization for me. They’ll offer me a lot and have great coaching and staff. I met my billets and they seem like great people so it’ll be an awesome opportunity,” Byfield said.

Jumping from Midget to the OHL can be a challenge. With his size, power and speed, Byfield should be able to keep up to the physicality, but he did note he’ll work on one essential part of his game.

“I really want to work on my face offs. Especially when you move into playing against bigger and stronger guys, taking the draws next year with be tough. I need to work on that so the coach will trust me more for defensive zone draws.”

The HockeyNow Minor Hockey Player of the Year awards for B.C., Alberta and Ontario will be announced in July.