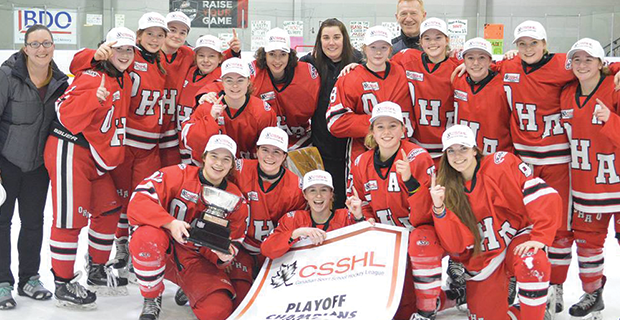 No rest for the weary.

It could be the motto that Okanagan Hockey Academy forward Sarah Paul (Kelowna, B.C.) lives by.

After scoring the lone goal in the Canadian Sport School Hockey League female varsity championship game against defending champions Delta Hockey Academy, Paul had just minutes to celebrate before heading back out on the ice in the semifinal with the OHA female prep team, where she opened scoring for that squad.

“I was pretty tired. I just changed colours and got right back out there,” said Paul.

Her championship winning goal in the varsity division came with 5:45 remaining in the middle frame.

“I just caught them on a bad change and they left me on the far side Taylor Catcher passed it from our end and put me on a break away. I just shot it low right side, over her glove. It’s my favourite spot to shoot,” said the humble Paul.

Her teammates, had much more to say.

“It was mid-second period and it was on a breakaway. It was her second that game. She has such a hard shot and it went in,” said assistant captain Brooke Disher (Fort St. John, B.C.).

Andi Main, who will return to OHA for her final year, said it took a lot of work to get to the championship game.

“We really pushed hard to get this and it feels really awesome to accomplish something this big. We have come a long way,” said Main. “I was on the bench for the final seconds. We are all holding hands and screaming just waiting for the buzzer to go.”

Getting a chance to hoist the championship trophy was beyond anything Paul dreamed of.

“I never thought when I was younger that I would be able to do something like that. Hockey was just for fun, I didn’t see this in my future at all. Playing with OHA is even more fun, but it is competitive too,” said Paul, who is in her second year with the sport school. “There is so much more here than just hockey. We have great teachers and support in the classroom. It really has made me a better person, holding me up to higher standards all-around — as a hockey player and student.”

OHA got to the finals on the back of goaltender Selma Luggin, who posted two shutouts before stymieing shooters in the finals for her third shutout of the tournament.

“The team in front of me does all the work,” said Luggin (Vienna, Austria), of her squad who also won the regular season banner. “I just have to save some shots. We fought the whole season.”

Delta and OHA tangled the evening before with Delta, coming out on top 3-2.

OHA opened the tournament with a 4-0 win over Pilot Mound and then had a 3-0 win over Coeur d’Alene Hockey Academy.

The following day, Paul found herself playing for the CSSHL female prep championship, this time it was on the losing side as the Pursuit of Excellence finished their dominating year with a 6-3 win over Okanagan Hockey Academy.

Female Prep Freshman of the Year Anne Cherkowski (Coldstream, B.C.) added a goal and three assists for Pursuit of Excellence, while Dara Greig (Lethbridge, Alta.) chipped in with a goal and two helpers.

Pursuit jumped out to a 2-0 lead after 20 minutes and then held a 4-2 lead going in to the final frame.

Ava Thewes (Clarkston, Mich.) made 23 saves to record the win between the pipes for Pursuit, while Danielle Serdachny (Edmonton, Alta.) and Jordan Mortlock (Medicine Hat, Alta.) rounded out the scoring.

“I knew from the very start we had a really strong group of girls with lots of skill,” said Sydney Neustader (Lake Country, B.C.). “We came together as a team really early as a season and I think that transferred on to the ice. In this game we were just really ready to go, mentally prepared. We got a couple of quick goals and our powerplay was successful and our goalie was on the ball.”

Pursuit had only lost one game during the regular season, which happened to be to OHA in overtime.

“We had faith that we could beat them, we all believed it, but the hockey gods weren’t on our side,” said OHA defenceman Lyndsy Acheson (Summerland, B.C.).

Pursuit also won the regular season banner with a record of 20-0-1.

“We knew it was going to be a battle but we just had to stay on top of them. It was just keeping the pressure on them because they are a tough team,” said Elizabeth Klimm (West Kelowna, B.C.).

Pursuit of Excellence kicked off the tournament with a 10-0 win over Banff. They then defeated Edge School 7-2 and poured on more offence against Northern Alberta, beating them 7-3 in the semifinal.

Back to Top
By Kristi Patton| March 29, 2018
Categories:  Minor Hockey