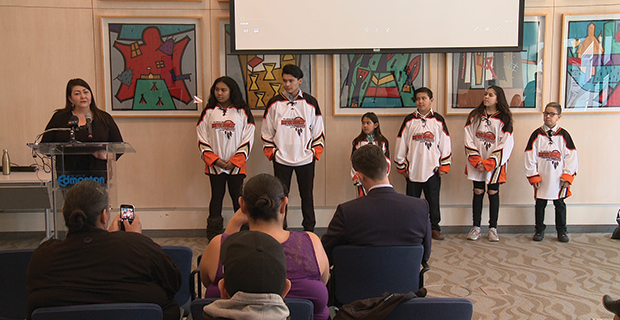 For a quarter of a century, Indigenous  hockey players in Alberta have played in one of the province’s largest tournaments, but it hasn’t been well-documented.

The Alberta Native Hockey Championships (ANHC) have been growing each year, and for their 25th anniversary, the awareness surrounding the event is at an all-time high.

Greg Sparklingeyes, the president of Alberta Native Hockey, said they are engaging with more groups and getting the word out to increase support.

“This is the first time we’ve really had a media presence so creating awareness is more what we’re trying to do this year,” Sparklingeyes explained.

The media coverage is evident. In addition to HockeyNow picking up this story, CTV has produced some spots surrounding it, plus the Edmonton Sun covered the March 14 press conference. TSN 1260 joined CTV for the multimedia sponsorship as well.

This year, more than 250 teams from more than 45 communities across Alberta and the Northwest Territories will head to Edmonton at the start of April, bringing over 3,100 players and more than 450 coaches.

Priscilla Swampy-Dion, the Treaty 6 rep and registrar, said the ANHC has grown from about 60 teams in the start to now over 250, and with an increase of close to 30 from last year, it’s by far the largest Championship to date.

Each year, Edmonton has played host. The central location and abundance of rinks is the perfect setting, and with the city getting more on board, it willl go a long way for the ANHC.

According to the press release and Sparklingeyes, a study found the tournament had an economic impact of over $23 million to Edmonton last year. More than 14,000 fans flocked to ice rinks to watch the play, bringing plenty to restaurants, hotels and rinks.

At the launch on March 14 in Edmonton, Mayor Don Iveson noted the city has not fully embraced or shared the tournament until now, something that was long overdue.

“It’s an extraordinary honour for Edmonton to play host to the Alberta Native Hockey Provincial Tournament. Congratulations on 25 years. I encourage all Edmontonians to check out a game,” Iveson said at the press conference.

Sparkingeyes says this tournament brings players together for a chance to play with their own family and friends, some outside of their regular season leagues, and go back to the more skill-focused play.

“Aboriginal hockey players play a different style,” Sparklingeyes said. “It’s more free-flow, the coaches are as systems-oriented and the natural talent kind of goes in a more offensive type style. What we try to promote and keep is what we call the native hockey style.”

According albertanativehockeynet.com, notable alumni from the league include Rene Bourque, Sheldon Souray, Jordin Tootoo and Wacey Rabbit. There are also several players in the Junior ranks who have come through this tournament, plus Devin Buffalo, a nominee for this year’s Hobey Baker Award for the NCAA’s Top Player, who spent four years with Dartmouth in the NCAA.

Earlier in March, the Little Native Hockey League, or Little NHL, was hosted by the Moose Cree First Nation in Ontario. Founded in 1971, the Little NHL brought out just over 200 teams this year and is a huge part of First Nations hockey in Ontario. However, it’s still not as large as this Alberta tournament.

In May, the National Aboriginal Hockey Championships will take place in Membertou, Nova Scotia. Each province sends a team to compete.
Opportunities are growing for Aboriginal skaters in Canada, and with the growth of these tournaments that allow for a sharing and preservation of culture, it’s a good sign.

Sparklingeyes noted the abundance of First Nations players in Edmonton for the weekend presents opportunity.

“This is a good place to network and connect for people. Especially if you’re in the hockey business, or anything sports or something you want to promote to the Aboriginal community, it’s a great place to go and mingle,”

The Alberta Native Hockey Championship runs from April 5 to 8 and has both male and female teams from the minor levels all the way up to Junior. To learn more, visit www.albertanativehockey.com.