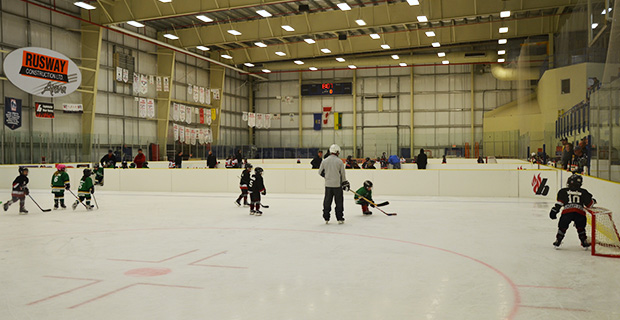 Hockey Canada has fallen behind other countries in cross-ice hockey, but now the Great White North has implemented it for skaters aged five and six years old, with all skaters under nine soon to be playing on smaller ice surfaces. (Courtesy of Hockey Alberta)

For a young hockey player, 200-foot rinks are massive and playing can be daunting. It’s unnecessary for those learning the game.

Following the lead of other countries in order improve skill in players, Hockey Canada mandated cross-ice hockey will now be played across the nation for kids under seven years old this season.

That means Initiation/Tyke (five- and six-year-old) players have moved to the smaller surface, and by 2019-20, all kids under nine years old will play under the same conditions.

Announced in March, the majority of hockey organizations got on board, but some organizations across Canada have pushed back, claiming there hasn’t been enough time to implement the change.

The main outliers reside in Toronto, including many teams in the Greater Toronto Area. These organizations have select leagues for the top five-, six- and seven-year-olds, and here the teams argue the more skilled players, regardless of their age, need the full ice.

The Ontario Hockey Federation (OHF) took a request from the Greater Toronto Hockey League (GTHL), to defer the rule for a year after numerous teams and leagues said they lacked time for implementation. It gives them time to best determine how to implement this.

Initially, the OHF said teams that defy the decision to play cross-ice cannot play in or host tournaments. However, after accepting deferral for a year, that will no longer apply.

The North Toronto Hockey Association (NTHA) has a Tyke Select team that will continue to play full-ice during the season, but for their house league games, they will stick to cross-ice.

Blair Robinson, the president of the NTHA, said the Tyke players will play cross-ice only next year, regardless if they are Select or not.

Robinson also said his league has welcomed the new mandate.

“Cross-ice hockey is proven to provide kids with many more opportunities to touch the puck and be involved in the play. It’s proven to be more fun and we know that fun is critical factor that keeps kids in the game,” Robinson said.

“Most parents with young kids intuitively understand the benefits of cross-ice hockey and are very excited by the model,” Robinson said.

“Some of the initial feedback that we received from our Tyke House League group at North Toronto, was that players were having a lot of fun during their first introductory cross-ice sessions. There seemed to be a lot of smiling faces on the ice.”

OUT WEST
BC Hockey and the Saskatchewan Hockey Association implemented the smaller area of play last season, as did Hockey Alberta, who created a three-year plan.

Justin Fesyk, the Senior Manager Hockey Development for Hockey Alberta, said they rolled the new mandate out in phases.

“We’ve been recommending it for two years and once the national body mandated it, it came into effect. We focused on education in year one, influencing the associations in year two and this worked out well for our three-year plan,” Fesyk said.

But Fesyk said they still faced their fair share of challenges along the way.

“We have about 186 associations, plus [Calgary and Edmonton with] another 50 so it was really tough,” he said. “We had to be prepared to enforce it and made sure we had all resources ready to implement it.”

The main hurdle has been the cost of dividers for the ice, but some provinces, specifically Alberta, have secured partnerships to cover costs.

A POSITIVE STEP
There are clear benefits of this move: resource management, meaning two games can be played at once, plus more puck touches for players.

USA implemented cross-ice in 2009, although some states have had it longer, like in Arizona. They have a big supporter – Auston Matthews of the Toronto Maple Leafs.

In an interview with CityNews at the end of Sept., Matthews credited cross-ice in helping him develop by ‘making quicker plays and processing the game a little faster’.

Hockey parents can be difficult to convince, and some may not see the positives. However, with case studies from other countries and plenty of feedback, cross-ice hockey should case skills should skyrocket.

Sweden has had cross-ice play for years, and they even go to age 10 or 11 in some cases. Smaller surfaces are becoming a trend in sports like soccer, so it’s good hockey is catching up.

This first full year should give a lot of clarity to each province, plus Hockey Canada as a whole as to what works and what needs improvement.

“Our mission has always been to ensure kids have lots of fun playing hockey, stay in the game for life, and develop to their highest potential. Starting them out this way is the right direction to take with our youngest players,” NTHA’s Robinson concluded.