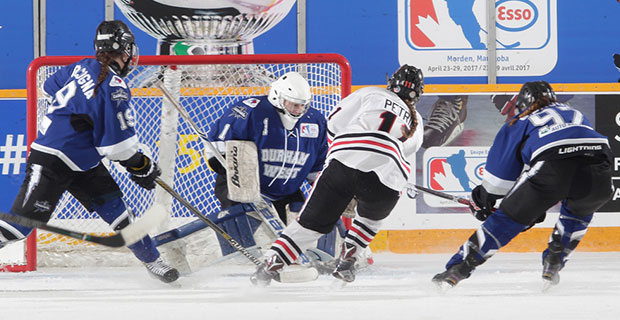 Day 3 of the 2017 Esso Cup saw all three teams west of Manitoba sweep the entire day with victories over Mid-Isle, Triolet and Durham West. Prince Albert was able to secure their first win of the tournament to put them back into contention for the medal rounds.

The Bears hopped out to a three-goal lead in the first and didn’t look back as they continued the winless Wildcats’ woes for the third day in a row, winning by a five-goal margin. Bears forwards Camryn Amundson and Jadyn Kushniruk finished the game with two goals apiece while Story Navrot and Miranda Heidt each found the back of the net once.

In one of the most anticipated games of the day, the Slash were able to edge out the Harfangs to remain the only unbeaten team in the tournament and place themselves at the top of the standings.

The Harfangs came out and attacked quickly as tournament point and goal leader Chloé Gendreau opened the game with two goals in the first period. The Slash responded with two goals of their own from Madison Willan and Jayme Doyle. Willan, who was second on her team in points, now sits second in the Esso Cup with five points after Day 3.

Harfangs forward Megan Bureau-Gagnon opened the third with an early goal to give her team the lead. That was until defenceman Taylor Anker masterfully made her way around three Harfang attackers in her own end to put the Slash in transition and – after her teammates set up the zone – Anker potted one right at the top of the crease.

The Slash picked up on that momentum as Cassidy Maplethorpe scored the game winner late in the third and secured the victory to keep St. Albert unbeaten.

In the final game of the day, the host Hawks were able to bounce back after a tough loss a night before at the hands of the Slash. Tied for points on her team, Makenzie McCallum opened the scoring late in the first to shake off any doubt that the Hawks were still reeling from their loss the night before. After coming out of the intermission, McCallum then set up teammate Brooklyn Platt to put the Hawks up by two.

The Lightning cut the lead in half before the second finished with a late goal from Mackenzie MacDonald, but the Hawks were able to restore their two goal lead early into the third. Katelyn Heppner scored three minutes into the final frame and Pembina didn’t look back as Hannah Petrie added a power play goal to keep the hosts in the top of the standings.

Day 4 will have the Bears trying to slow down the Slash in the first game of the day. The Bears are looking to gain some traction after earning their first win of the tournament, but the Slash are also looking to stay undefeated. The Wildcats are still searching for their first win and will battle against the Lightning who sit tied for fourth in the standings. The Harfangs will be ready to redeem themselves after losing their first of the tournament when they take on the hosts in the final game of the day in a fight of second place teams.