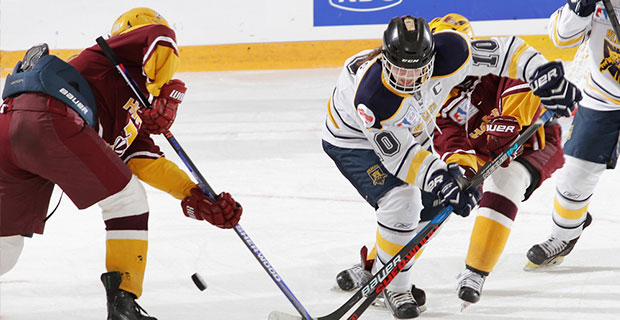 The second day of the 2017 Esso Cup helped two teams build some momentum for the later part of the tournament. Quebec came away with another dominating win as the Harfangs were able to take care of the Wildcats from the Atlantic.

For the second straight day, the Harfangs scored four goals, but it was Chloé Gendreau who stole the game by scoring the final three goals to complete the hat trick. Quebec was able to benefit from a better defensive effort by limiting the Wildcats to 25 shots, a turn around from their opening day game where G Mélyann Daigneault put aside a total of 42 shots.

A bright spot for the Wildcats, who have suffered two losses in the first two days of the tournament, has been Taylor Gillis, who responded 22 seconds after the Harfangs opened the scoring early in the first.

The Prince Albert Bears weren’t able to bounce back as well as they hoped a day after their 14-game winning streak was snapped. Durham West handed them an overwhelming 5-1 defeat as they built a three-goal lead in the first period. Julie Gough opened it up 18 seconds into the game, and Brianna Brooks and Mackenzie Macdonald quickly capitalized halfway through the period.

In the evening game, St. Albert was able to silence the home crowd for now as they beat Pembina Valley in a nail biter. The Hawks opened the scoring on Mackenzie Hutchison’s first period goal, but the Stephanie Markowski and the Slash were able to tie it before the period ended. The back and forth battle continued through the second until Makenna Schuttler put in the game winner and her first of the tournament.

The Hawks couldn’t take advantage of two power plays in the third and goaltender Halle Oswald’s second straight outstanding performance where she made 49 saves in the loss.

Day 3 will feature both undefeated teams squaring off as Triolet and St. Albert look to stay unbeaten in one of the most anticipated games of the day. Prince Albert and Mid-Isle will be looking for their first victory of the tournament as they battle in the early game. The day will be capped off with host Pembina Valley looking to get back on track and slow down Durham West.