Will Rest or Rust Prevail as Bulldogs and Greyhounds Square Off in OHL Final? 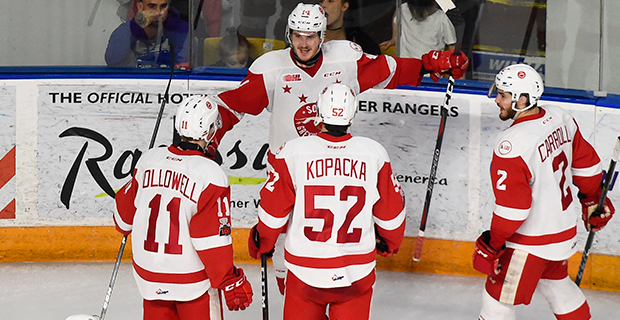 The Sault Ste. Marie Greyhounds enter the OHL final against the Hamilton Bulldogs after going through the maximum seven games in their last two series. (Aaron Bell/OHL Images)

By the time the OHL final begins on Thursday, the Eastern Conference champion Hamilton Bulldogs will have gone through seven days since their last game, certainly enough time to rest up and nurse any bumps or bruises.

On the other hand, the Sault Ste. Marie Greyhounds will be operating on only three day’s rest, and it might feel like even less since they played the equivalent of three games in two days to win the Western Conference final.

Game 7 against the Kitchener Rangers went through double overtime before Jack Kopacka sealed the Soo’s spot in the final. That was a day after Kitchener tied the series up with an overtime win in game six. And to top it off, both teams had to make the long trek from Kitchener to the Soo in between.

If you wanted the classic tale of rest or rust in the OHL final, you’ve got it.

Hamilton enters the championship series after disposing of their previous three opponents each in a five-game series.

It’s been a much tougher road to the finals for the Greyhounds, who went through a seven-game Western Conference semifinal as well.

This is the first time the number one seeds in both conferences have reached the league final since 2012, when the London Knights defeated the Niagara IceDogs in five games.

Led by OHL coach of the year Drew Bannister, the Greyhounds have been the cream of the crop in the league for most of the season and have often been ranked atop the CHL Top 10 too.

One would think going through two game sevens in the playoffs so far will have given them the adversity needed to persevere through yet another tough test.

For the Bulldogs, it didn’t take the front office long to see they could be a serious contender for the OHL, and they acted accordingly with their trade deadline strategy, going all in on a number of star players.

Here’s what you need to know about each team.