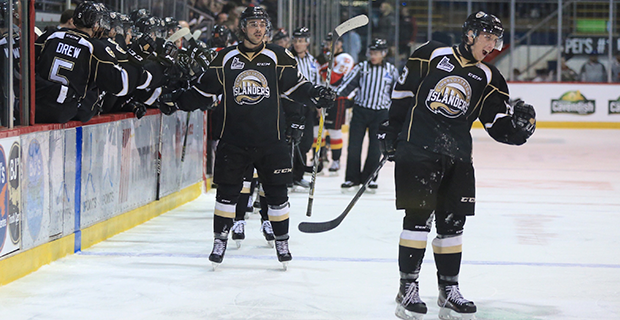 The Charlottetown Islanders are heading into their third round of the QMJHL postseason after sweeping their series against the Baie-Comeau Drakkar and the Cape Breton Screaming Eagles. (Darrell Theriault photo)

It’s happened only once in the 47-year history of the Quebec Major Junior Hockey League.

Following the 2009-10 season, the Moncton Wildcats and Saint John Sea Dogs squared off in the President’s Cup final marking the first time in league history that two Maritime Division teams made it to the QMJHL championship series.

At the time it was called the Atlantic Division and similar to the present, was made up of Saint John, Moncton, Cape Breton Screaming Eagles, Acadie-Bathurst Titans, Halifax Mooseheads and the PEI Rocket who have morphed into the current day Charlottetown Islanders.

Moncton went on to claim the President’s Cup that spring with a 4-2 series win over Saint John who were on the cusp of capturing back-to-back league championships in 2011 and 2012.

But time passes, players graduate and teams have to rebuild, which is the nature of junior hockey.

One year a franchise can be a legitimate contender and reap the benefits of solid drafts and player development but when that dries up you are suddenly faced with the reality of rebuilding for the “next time.”

The Wildcats were never in the championship equation this year after experiencing the pains of a rebuilding process and finished dead last in the standings.
At the same time, the Sea Dogs have been the cream of the crop in the ‘Q’ this season ending the regular campaign as the No. 3 ranked team in the Canadian Hockey League with a 48-14-5-1 record.
They finished at the top of the QMJHL standings with 102 points and are considered one the favourites to be standing when the postseason comes to a conclusion.
At press time, the Sea Dogs completed a four-game sweep over the Val-d’Or Foreurs in their QMJHL quarterfinal series and are on their way to the final four.
If they continue their winning ways and take up one spot in the ‘Q’ final who may be their dance partner?
This is where it gets interesting.
The Charlottetown Islanders swept their matchup against the Cape Breton Screaming Eagles (4-0) and are headed to the third round of the playoffs for the first time in franchise history.
The Blainville-Boisbriand Armada roared back from a three-games-to-one deficit to take their series against Acadie-Bathurst, so scratch off one more Maritime Division team.
The fourth quarterfinal was determined in dramatic fashion as well with the Chicoutimi Saguenéens taking out the Rouyn-Noranda Huskies, last year’s President’s Cup champion, with an overtime win in Game 7.
With Saint John and Charlottetown already moving on to the semifinals, it remains to be seen if they can eventually square off in the final.
The possibility does exist with (1) Saint John facing (8) Chicoutimi and (4) Charlottetown squaring off against (5) Blainville-Boisbriand.
This scenario would not have been possible if expansion into the Maritimes in 1994 did not become a reality when the Halifax Mooseheads were welcomed into the league.
Opportunity starting knocking in Eastern Canada for major junior hockey expansion and several new franchises were born.
Moncton, New Brunswick was granted an expansion franchise for the 1995-96 campaign. They were known as the Alpines for that season only, before being renamed the Wildcats.
The birth of the Acadie-Bathurst franchise is a direct result of relocation by a floundering franchise in search of greener pastures after moving in 1998 from Laval, Quebec to Bathurst, New Brunswick.
Cape Breton found their way into the QMJHL after a long and winding road that originated in Sorel with stops in Verdun, a second stint in Sorel then Granby before setting up roots in Sydney, Nova Scotia in 1997.
Saint John entered the QMJHL as an expansion team in 2005 and has enjoyed tremendous success in a relatively short time in the circuit. The Sea Dogs made history in May, 2011 when they became the first team from Atlantic Canada to win the Memorial Cup.
The Sea Dogs had an expansion twin with the Saint John’s (Nfld.) Fog Devils that stuck around Canada’s East Coast until 2008 before relocation to become the Montreal Junior Hockey Club in March of that year.
Charlottetown was originally born as the Montreal Rocket in 1999 before picking up and moving to Prince Edward Island in 2003 to become the PEI Rocket. At the beginning of 2013-14, the Rocket rebranded as the Charlottetown Islanders.
Only time will tell if we’ll see two teams from the Maritimes Division battling it out for QMJHL supremacy.
In the meantime enjoy the ‘Q’ playoffs no matter who ends up in the final.