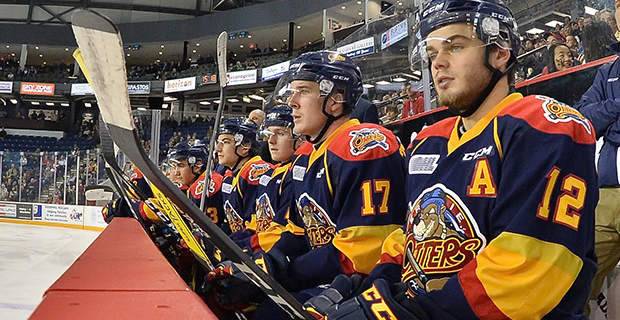 The Erie Otters moved up from 6th to 2nd in latest CHL Power Rankings. (CHL Images)

It has now been a month since the trade deadline came and went across the CHL leagues, and one team from each has put themselves in a terrific position to compete for junior hockey’s most treasured prize—the Memorial Cup.

The CHL updated its country-wide power rankings on February 1, and it’s no surprise to find the Erie Otters (OHL), the Prince George Cougars (WHL) and the Saint John Sea Dogs (QMJHL) have all moved up the ladder. Each made moves that solidified them as bonafide contenders to win their respective playoff tourneys and move on to the prestigious Memorial Cup Tournament.

With each team already possessing a solid mix of veterans and draft-eligibles, fans across the country should get some epic showdowns before the playoffs close. Here is a rundown on how these players are fitting in with their new teams.

Erie Otters, 6th place to 2nd
With veteran weapons like Alex DeBrincat (CHI), Taylor Raddysh (TBL) and Dylan Strome (PHX) around, the Otters would have been dangerous this spring regardless of what they did at the deadline. However, the OHL has a strong Western Conference again this year, and it takes a special team to make it through the bracket (keep in mind that they couldn’t with Connor McDavid two years prior). So, the Otters got more special by adding Anthony “Big Game” Cirelli (TBL), Warren Foegele (CAR) and tough defender Cameron Lizotte.

Cirelli, who joined two former Canadian World Junior teammates Strome and Taylor Raddysh, has picked up right where he left off in Oshawa, scoring 8 points (1 goal, 7 assists) in 9 games. Foegele has fared even better, with 15 points in 12 games (5 goals, 10 assists). It’s do-or-die for the Otters this year—and with perhaps the best top six in the CHL, anything short of a Memorial Cup appearance will be a disappointment.

Prince George Cougars, 7th to 4th
The Prince George Cougars haven’t finished higher than 3rd in the B.C. division since the league’s divisional structure was realigned in 2001. Their luck hasn’t been much better in the playoffs—they’ve only made it out of the conference quarterfinals once, when they made it to the Western Finals in 2007. Therefore, it’s no surprise that they decided to go all-in on their ever-likely first place division finish this season, adding a bruising defender in Brendan Guhle (BUF), top draft prospect Nikita Popugaev, Radovan Bondra (CHI) and overager Tanner Wishnowski.

Although Guhle was added midway through November, the Cougars snatched him up as quickly as they could in order to ensure the team kept rolling along. Guhle has responded with 20 points in 25 games, his highest scoring rate since entering the league. And while Popugaev has seen his production dip while settling in with his new team (8 pts in 12 games), Bondra has been terrific, scoring 12 points (6 goals, 6 assists) in 11 games.

Saint John Sea Dogs, 9th to 8th
Although the CHL still has Rouyn-Noranda (6th) ranked ahead of the Sea Dogs, that could change in a hurry. With Thomas Chabot (OTT), Spencer Smallman (CAR) and Jakub Zboril (BOS) ready to move on at the end of the year (among others), the Sea Dogs are another team that needs to get it done now. At the deadline, they improved their chances mightily by acquiring Canadian World Junior goaltender Callum Booth (CAR), Julien Gauthier (CAR) and Matthew Pietroniro.

The moves put a trio of Carolina Hurricanes prospects together in Smallman, Booth and Gauthier, perhaps saving the organization some gas money during the QMJHL playoffs. More importantly, the Sea Dogs are now a genuine contender. Although Booth’s save percentage has dropped a bit, he’s only letting in 2.72 goals a game, slightly fewer than he did in Quebec. Meanwhile, Gauthier has racked up 6 goals in 7 games.