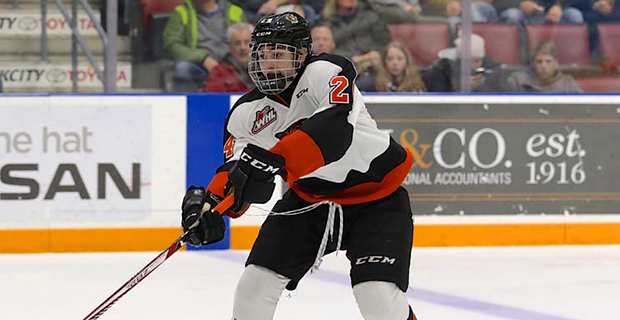 Josh Williams was picked up fifth by the Medicine Hat Tigers at the 2016 WHL Bantam Draft – the same year he was named the HockeyNow B.C. Player of the Year – and managed his first 'dub goal this past season in a four-game stint with the team. (Randy Feere photo)

The next wave of talent is ready to make its mark in the Western Hockey League.

With the 2016-17 season just around the corner, dozens of 16-year-old players are poised to crack their respective rosters and start creating household names for themselves across the league.

Here’s a look at the top five picks from the 2016 WHL bantam draft and where they stand entering their first season of eligibility:

Peyton Krebs (LW)
Kootenay Ice
Dynamic in nearly every sense of the word, Peyton Krebs is exactly what the Kootenay Ice need to kickstart a new future in Cranbrook after nearly relocating and changing ownership in the off-season.

Kootenay opted to use their first overall pick on the 5-foot-11, 163-pound lefty in 2016 after a staggering year with the Alberta Major Bantam Hockey League’s Rocky Mountain Raiders. Despite playing in just 27 games, Krebs amassed 46 goals and 56 assists for 102 points — all league-bests — to earn himself the AMBHL’s MVP and top forward awards. While Krebs’ point production slowed in his transition to the Alberta Midget Hockey League — totalling 15 goals and 25 assists in 29 games — he still left his rookie season with the league’s top forward award and a place on the first all-star team.

The 6-foot-2, 170-pound centre joined up with the Blades in a full-time role last February. With a significant number of forwards dealing with injuries, the Blades were forced to dig into their reserves early and Dach has been the benefactor.

Dach found his way onto Saskatoon’s radar with a 100-point season in the AMBHL in his 13-year-old year. Dach went on to join the Fort Saskatchewan Rangers midget AAA team the following year, where he managed 14 goals and 21 helpers in 34 contests. 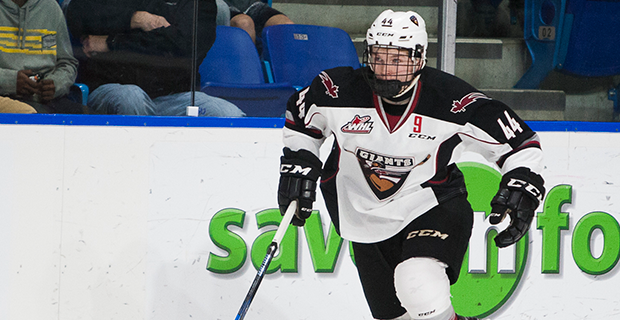 2016 HockeyNow Alberta Player of the Year Bowen Byram was the highest drafted defenceman at the 2016 WHL Bantam Draft, at #4, and is expected to do big things in his full-time role with the Vancouver Giants this season. (Chris Relke photo)

Bowen Byram (LD)
Vancouver Giants
Bowen Byram is sure to be a Giant on Vancouver’s back end this year. The 2016 HockeyNow Alberta Minor Hockey Player of the Year became the highest defenceman taken in the 2016 WHL bantam draft following a highly productive with the AMBHL’s Lethbridge Golden Hawks.

Byram’s 22 goals and 37 assists over 34 games led the league in points from the back end while earning the AMBHL’s top defenceman award en route to a league championship with the Golden Hawks.

While he failed to find the score sheet in his 11 games as an affiliate player with the Giants last season, look for him to earn a key role with a full-time spot this year.

Logan Barlage (F)
Swift Current Broncos
Saskatchewan product Logan Barlage has been a prolific scorer in every stage of his budding hockey career. From 125 points in just 30 games with the Humboldt Broncos bantam AA squad to a 76-point campaign with the Prince Albert Mintos midget team last season, Barlage seems poised and ready to bring his nose for the net to the Broncos’ bench.

While his point production has scaled accordingly with the level of competition he faces, there was once a time when the young Barlage was averaging nearly five points per game. As a forward with Humboldt’s 2013-14 peewee AA squad, Barlage nearly broke the scoreboard on a regular basis — closing out the season with 175 goals and 99 assists in just 56 games.

The 6-foot-3, 190-pound lefty took part in four games as an affiliate with Swift Current last year, but expect him to play a much bigger role as a 16-year-old this season.

Williams earned the title of HockeyNow’s B.C. Minor Hockey Player of the Year in 2016 after posting some seriously impressive numbers with Yale Hockey Academy’s bantam squad — and his pace didn’t take a hit in the switch to midget.

The Langley product eclipsed two points per game in his bantam draft year — closing out the CSSBHL season with 35 goals and 24 assists for 59 points in 25 contests and earning a league MVP award in the process — then went on to repeat the feat in the CSSHL last season with 55 points in 27 games.

Williams was able to check his first career goal off the list in a four-game stint as an affiliate with the Tigers last season, but expect much more out of the 6-foot-1, 174-pound righty when he earns full-time minutes this year.