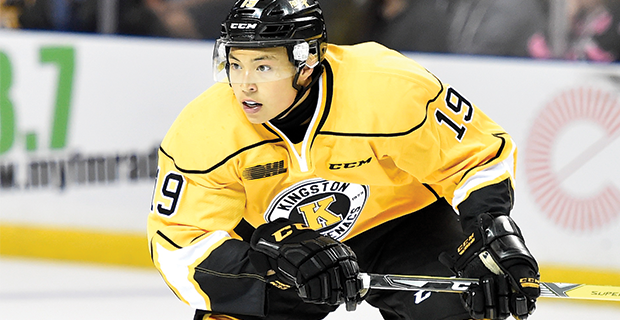 The first round of NHL Entry Draft always contains a liberal helping of CHL talent, and this year will be no different.

Typically, there are a few players who gain considerable attention during their draft year. I won’t bore you with the Patricks and Hischiers—there are plenty of those articles on the way in the future. So here are my top five most-improved draft-eligible CHLers.

Jason Robertson is the precisely the sort of leftwinger that every team needs but there never seems to be enough of—he knows how to use his 6-foot-2 frame, he thinks the game like a pro and can finish around the net. As such, he will be highly sought after at the draft table. Although he was a very good prospect all season, he finished with 27 points in his last 13 games and has led the OHL in scoring at times during the playoffs.

Conor Timmins has seen his stock rise steadily since last season, when he was an afterthought on the Greyhounds blueline. Now he has a 61-point season, a sparkling plus-53 rating and is well on his way to leading the Greyhounds defence to the third round of the playoffs. The smart defenceman is also valuable for his right shot, which is a commodity in the NHL. He’ll be considered by every team in the mid-first round.

Centre Jaret Anderson-Dolan has become a can’t-miss prospect in a draft that is looking deeper by the minute. At 5-foot-11, he isn’t the biggest kid in the draft, but he has a terrific shot—and 39 goals to show for it on a weak Spokane team. He has also demonstrated poise and leadership skills for the Chiefs, and Hockey Canada has rewarded him by naming him captain of the national team at the U18 World Junior Championships.

The QMJHL has produced some pretty solid defensive prospects in the recent past, and this year is no different. Brother of NHL prospect Mathieu (TBL), Joseph has long been projected for the second round, but he could squeak into the first. At just 160 pounds, Joseph will need to put some weight on, but he has the speed and acceleration to create space and the compete level to make life frustrating even for bigger forwards.

Heponiemi is the type of centre who is always ahead of the game, staying with the puck and influencing every play. He made his way across the sea last summer, when the Broncos selected him 10th overall in the CHL Import Draft. Since then, his playmaking skills have been received better than anyone expected, given his tiny 143-pound frame. Heponiemi is a mysterious talent, and he’ll be an intriguing late-first to second round option.