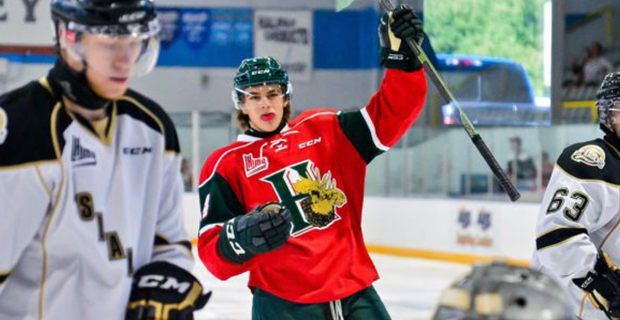 The CHL Import Draft is an opportunity for European prospects to give NHL scouts a better look at their skills. This season, five 2016 imports have made the most of their chance to showcase themselves.

Every year, each team in the CHL can select up to two players from the import draft. European players who decide to cross the pond know that it’s harder for NHL scouts to gauge their talent overseas. Skill varies from league to league, and scouts usually focus on teams with more than one big talent, to make the most of their time. Often, players are overlooked unless they play on a high-profile squad.

Players who make the move to North America can be viewed favourably in comparison to their peers. They demonstrate a willingness and desire to play in the NHL, and get valuable experience playing on smaller ice surfaces.

This season, five NHL entry draft-eligible players have made the most of their rookie seasons in the CHL. Here are the top five most-improved 2016 CHL import players.

Nico Hischier, C, Halifax Mooseheads
By now, Hischier shouldn’t need an introduction. The talented centre has put his skills on display in several high-profile scouting events, scoring seven points in five games at the World Junior Championships and adding two goals and an assist at the CHL/NHL Top Prospects Game. His 77 points and 37 goals are tops among CHL rookies.

Usually noted for his offence, he is also the best defensive player on his team and dominates in any situation. That hasn’t gone unnoticed. When he was selected sixth overall in the import draft last June, he wasn’t even in the first-round conversation for the upcoming NHL draft. Now, some believe he could unseat Nolan Patrick at first overall. If he is, he would be the first Swiss player to achieve the feat.

Henri Jokiharju, D, Portland Winterhawks
When Finnish defenceman Henri Jokiharju was picked up by the Winterhawks, he was 5-foot-8 and weighed 158 pounds. Just seven months later, he is now 6-foot-0 and 170 pounds—but that isn’t the only reason scouts are all over this guy. He is a clever, mobile puck mover who is responsible defensively and thrives in clutch situations. He leads all WHL rookie defensemen in both goals and assists, with a stat line of eight goals and 32 assists for 40 points in 59 games. Like Hischier, he’s now projected to go in the first round.

Aleksi Heponiemi, C, Swift Current Broncos
Like Jokiharju, Heponiemi hails from Tampere, Finland. He’s wowed scouts not only with his scoring prowess, but his willingness to compete hard and fight for the puck. The feisty centre loves to throw the body around on the forecheck. The 143-pounder could definitely stand to gain a few pounds, but with 70 points (23 goals, 47 assists), an NHL team will likely overlook his size issues and take the playmaker in either the second or third round.

Ivan Kosorenkov, RW, Victoriaville Tigres
Ivan Koserenkov broke out in a big way for Victoriaville, scoring 13 and 12 points in the months of November and December, respectively. Afterwards, teams realized how dangerous the Russian is and began checking him hard. He had a few tough outings, but his resilience to battle back and adjust his game has been admirable. His 32 goals are second only to Hischier among QMJHL rookies.

Ivan Chekhovich, C/LW, Baie-Comeau Drakkar
European rookies are scoring a lot of goals in ‘the Q’ this year—Chekhovich is fourth in rookie goal scoring (behind Hischier and Kosorenkov). The Russian centre leads the Baie-Comeau Drakkar in scoring thanks to his silky hands and balanced attack. He is a smart player with hockey sense, speed and a repertoire of dangerous finishing moves around the net.