Top 5 CHL Goals of the Year 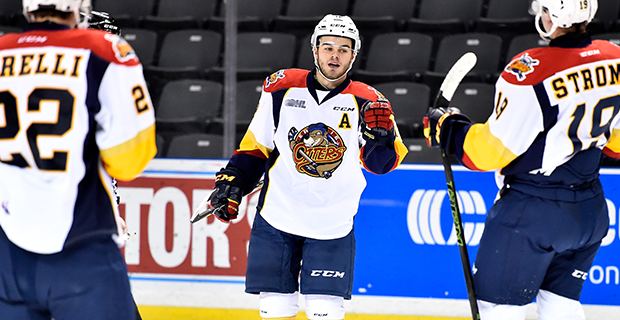 That’s it for another CHL regular season, folks. The last handful of games are over with, and to commemorate the season, I’m counting down the top five CHL goals of 2016-17.

Top five lists are subjective by nature and foolhardy at best. Still, I love them—and so do many readers. It was especially difficult in this case: What defines a great goal anyway? Speed? Stickhandling? Impact? Making the other fellow(s) look silly? There were plenty of goals this season that engaged all of these criteria, which made my job even more difficult.

Here they are, in descending order (although you could shake up the order and it wouldn’t matter much. They’re all bonkers).

5. Alex DeBrincat vs Oshawa Generals, Feb. 20
Scoring your 50th goal of the season must be a sweet feeling. Doing so against cross-conference rivals must be sweeter. But when DeBrincat scored this goal against the Oshawa Generals on February 20th, he became only the second player in OHL history to find out what it feels like to score 50 goals in three consecutive seasons. It might not be the best individual effort of the year, but it had tremendous impact – and it was nice to see him get it off a feed from a longtime sidekick in Dylan Strome.

4. Kailer Yamamoto vs Tri-City Americans, Dec. 30
If anybody wasn’t aware of Spokane Chief Kailer Yamamoto’s immense potential and game-breaking speed before December 30th, just watch his shorthanded goal against the Tri-City Americans. Yamamoto stole a rare errant pass away from Tyler Sandhu, then found himself in a footrace with the overage Americans captain. Watch the video to find out who won (by a lot).

3. Tyler Steenbergen vs Spokane Chiefs, Oct. 29
It’s safe to say that Swift Current’s Tyler Steenbergen has always been a pretty good at hockey. Still, not many could have predicted he would improve by 31 goals this season (20 to 51). Of the 51 goals he notched, none were better than the overtime goal he scored against the Chiefs early in the season on October 29th. Perhaps confidence played a large part in his production increase, as evidenced by this solo effort.

2. Vitali Abramov vs Val-d’Or Foreurs, Nov. 12
Another goal that happened early in the season, Abramov’s goal against the Foreurs on November 12th is a thing of beauty. Abramov burns both Foreurs with a tremendous display of speed. As he cruised through the neutral zone, he looked up as if he were about to dump the puck, but instead put his head back down and dug in, getting past both Foreurs defenders while the forward unit looks on helplessly. The Columbus Blue Jackets have a player here (Abramov was taken in the third round by the Jackets last summer).

1. Thomas Chabot vs Halifax Mooseheads, Mar. 12
Okay, full disclosure—I’m an Ottawa-based writer, and I root for the home team. I’m a blogger, not a TV analyst, so I have the luxury of being able to say it, consequence-free. I assure you though, my decision to pick Chabot for top honour is no act of bias. Watch as he cruises through four Mooseheads en route to the net, where he deftly flicks the puck into the net on the blocker side. Chabot is the best defensive prospect not in the NHL right now, and he has been showing it late in the season.