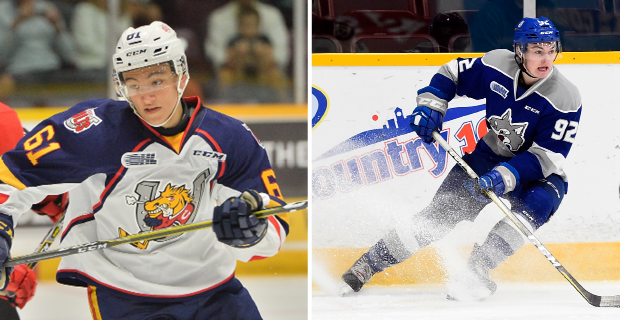 From Connor McDavid to Andrei Svechnikov, Ontario Hockey League fans have been treated to some very high-end NHL Draft-eligible talent over the past few years.

The 2018 draft was an eventful one for the OHL, as seven players from around the league were selected in the first round. That includes second-overall pick Svechnikov, as well as top-10 selections  Barrett Hayton and Evan Bouchard.

There have been many cases where the top prospect from the OHL has been obvious, but this year isn’t one of them.

It’s still very early in the draft conversation, but if preliminary projections are any indication, we could see a repeat of 2017, where there wasn’t an OHL player selected until Owen Tippett was chosen 10th overall.

That’s not to say there isn’t a strong crop of talent expected to come out of the OHL. There are a lot of unknowns, but these are some of the players who could hear their names called to the podium early in June.

Although he took a back seat to those players, he still looked impressive as a secondary scorer, finishing the season with 44 points (14 goals and 30 assists). He went on to play a big role with Canada’s Hlinka Gretzky Cup-winning team, finishing second in tournament scoring with eight points, including a tournament-leading seven assists, while showcasing his dynamic playmaking ability.

Blake Murray – C, Sudbury Wolves: The talented centre made an early impact with the lowly Sudbury Wolves, and finished as the team’s leading scorer after a few of their top players were traded away in January.

Standing at 6-foot-2 and weighing 180 pounds, he has decent size to go along with game-breaking talent. His 44 points (21 goals and 23 assists) were fifth among OHL rookies and second among all 16-year-olds.

With 2018 first-overall OHL draft pick Quinton Byfield joining the fold, Sudbury fans can look forward to a dynamic duo for the next few years.

Arthur Kaliyev – LW, Hamilton Bulldogs: The young American didn’t enter the OHL with very much fanfare, but people took notice after he scored 31 goals for the league-champion Bulldogs. To put that stat into context, the last 16-year-old OHLer to score more than 30 goals previously was Alex Galchenyuk in 2011.

Kaliyev’s 48 points were the most by anyone in their first year of eligibility, and while his production slowed down in the OHL playoffs and Memorial Cup, there’s no doubt playing so late into the year can only help with his development.

He also excelled with Team USA at the Hlinka Gretzky Cup, with three goals and six points in five games.

Graeme Clarke – RW, Ottawa 67’s: A shoot-first kind of forward, Clarke may have the most lethal shot of anyone eligible for the 2019 NHL Entry Draft.

His quick release allows him to score from anywhere, and he’s displayed great hands, too, dating back to when he scored the famous “Michigan goal” (scooping up the puck and tucking it in lacrosse style from behind the net) as a 15-year-old.

After a 14-goal rookie season with the 67’s, he made Canada’s under-18 team and helped Canada win gold at the Hlinka Gretzky Cup, scoring two goals and an assist in five games.

Michael Vukojevic – D, Kitchener Rangers: The mobile, 6-foot-3 defenceman had committed to the University of Michigan before he was drafted by Kitchener, but after spending the first half of last year in the United States Hockey League, he had a change of heart and joined the Rangers in January.

While it took him a while to get accustomed to the OHL, he excelled through the playoffs with 10 assists in 19 games as Kitchener came one goal away from reaching the OHL final.

Jamieson Rees – C, Sarnia Sting: Another member of Canada’s under-18 team, Rees enjoyed some early success with the Sting when they got off to an electric start in the fall.

A franchise-best 14-game winning streak propelled them to the top of the CHL’s Top-10 rankings, and during that stretch, Rees made a strong enough impression with coach Derian Hatcher to earn some playing time with top players Jordan Kyrou and Drake Rhymsha.

At the Hlinka Gretzky Cup, he showcased his work ethic and two-way ability, while also excelling offensively with a goal and four points in five games en route to gold.