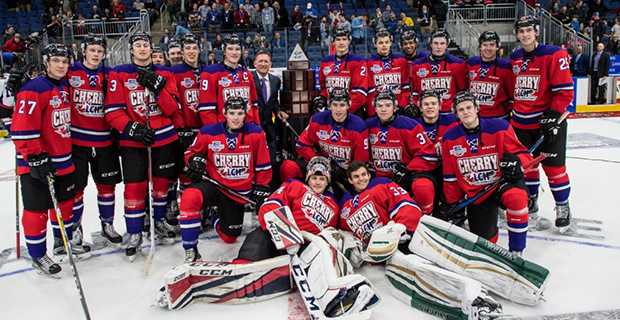 On Monday, January 30, Team Cherry put an end to a six year drought at the Sherwin-Williams CHL/NHL Top Prospects Game.

Without a victory since 2012, Team Cherry outlasted off Team Orr 7-5 in the offensive battle at Centre Videotron in Quebec City.

D Henri Jokiharju (Portland Winterhawks) led the way for Team Cherry with three assists en route to being named Player of the Game for his squad.

“That was a lot of fun, I’d love to play with guys like that every night,” said Jokiharju.

“I played with Antoine (Crête-Belzile, Blainville-Boisbriand Armada). I felt that we had good chemistry playing together which helped a lot.”

Nolan Patrick (Brandon Wheat Kings), the No.1 ranked prospect for the 2017 NHL Entry Draft helped his cause with a two-assist performance.

Playing alongside Owen Tippett (Mississauga Steelheads) and Maxime Comtois (Victoriaville Tigres), the trio combined for five points in the win.

“We started playing better in the second period once we go the nerves out,” said Patrick.

“Our line brings all kinds of different players. Comtois plays a 200-foot game, he hits and competes, while Tippet has a great shot. He had a beautiful goal on the power play. They’re both great players.”

The two teams combined for seven second period goals which turned out to be the most in one period at the event since 1996, when eight were scored in the third period at the old Maple Leaf Gardens in Toronto.

Nico Hischier (Halifax Mooseheads) was the offensive star and Player of the Game for Team Orr with a 1G-2A, 3-point performance.

“It was a hard battle out there with a lot of speed, I thought we (Team Orr) played well but in the end we lost,” admitted Hischier, who could go as high as No. 2 in the upcoming NHL draft.

The Swiss-born forward enjoyed the experience of playing with the best draft eligible players in the CHL and something he will use to build his confidence for the remainder of his QMJHL season.

“It was a lot of fun to play out there with a high level and high intensity.”

Team Cherry goalie Ian Scott (Prince Albert Raiders) turned aside 13 of the 17 shots he faced, while Team Orr netminder Alex D’Orio (Saint John Sea Dogs) made 15 saves on 19 shots during the first half of the contest.

In the second thirty minutes, Stuart Skinner (Lethbridge Hurricanes) turned aside 17 of 18 shots he faced to record the victory for Team Cherry while Michael DiPietro (Windsor Spitfires) allowed two goals on 16 shots for Team Orr.

In the win, Team Cherry outshot Team Orr 36-35 and finished the evening going 3-for-4 on the power play.

With the victory, Team Cherry improves to 6-13 at the Sherwin-Williams CHL/NHL Top Prospects Game.