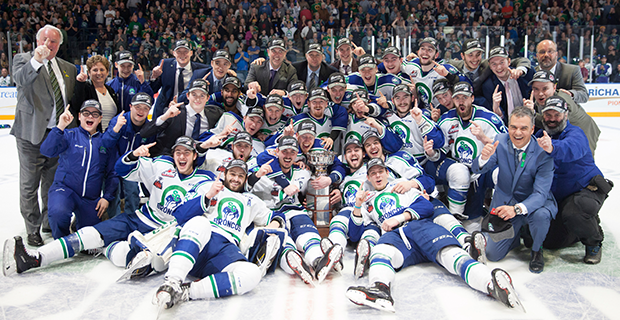 They may not be the hosts, but the Swift Current Broncos have been plotting their path to the Memorial Cup for months.

The Broncos kicked off the season on a frenetic pace led by their staggeringly effective top line of Glenn Gawdin, Tyler Steenbergen and Aleksi Heponiemi. While speculation surrounded their ability to carry that pace into the postseason, Swift Current silenced all of those doubts in approach of the trade deadline.

Acquiring seven players while sending 13 to various squads across the league, the Broncos loaded up with some of the WHL’s best two-way talent between November and January — including former Prince George Cougars defenceman Josh Anderson, Calgary Hitmen centre Matteo Gennaro and Lethbridge Hurricanes Giorgio Estephan, Stuart Skinner and Tanner Nagel — before going on to end a 25-year Ed Chywnoweth Cup drought in Swift Current.

“It’s tough losing guys on your team in deals like that, but we brought in good, character guys and they fit in right away. On and off the ice we just kind of jelled. I think they knew coming in that we were going to be a good team. I think the only thing holding us back was ourselves so we just tried to come together as quick as possible,” said Broncos captain Gawdin, who went on to earn the title of playoff MVP with 14 goals and 18 assists in 24 postseason games. “That’s pretty cool. I’m more happy about winning the Ed Chynoweth Cup, but winning [the MVP award], I wouldn’t be able to do it without my teammates and my linemates. They helped me throughout the season and the playoffs and I couldn’t have done it without them.”

Gawdin added the Broncos made every move matter when the postseason rolled around. Facing one of the most difficult playoff roads a 48-win team has ever seen, Swift Current battled past the Memorial Cup host Regina Pats and the East Division champion Moose Jaw Warriors in back-to-back seven-game sets before topping the Lethbridge Hurricanes and Everett Silvertips in six games apiece to clinch their third championship in team history.

“We had to face a lot of adversity, a lot of ups and downs, but in the end I think it just made us stronger fighting through that stuff. As the playoffs went on, I think our team got stronger. We just have such a close group of guys, we’re coming in to work every night for each other and I think that showed and it’s the reason we we’re the champions,” said Gawdin. “It’s kind of hard to put into words, the feeling of winning like that, especially at home and with such a good group of guys it just made it that much sweeter.”

Skinner proved to be a key acquisition for the Broncos, as the 19-year-old Edmonton product went on to post six shutouts, a .932 save percentage and a 2.20 goals against average through the playoffs before signing his name to a three-year entry-level contract with his hometown Oilers.

“He truly deserves it. He works super hard and he’s such a great guy,” Nagel said of his goaltender. “When we needed him to bail us out he was there. He was unbelievable all playoffs. It gives us that much more confidence when he’s kicking that we can go out and do our thing and he’s there to back us up.”

Nagel added the championship carries a special significance after growing up in Mossbank, Sask., as it's just the third time in 29 years that a Saskatchewan team has hoisted the the Ed Chynoweth Cup in the last 29 years — with Swift winning all three 1989, 1993 and now 2018 — and the eighth time since the league was founded in 1966.

“It’s been a long time since a Saskatchewan-based team has won the WHL, so growing up here you watch a lot of the teams and to be a part of one — and one that can win — it’s awesome,” said Nagel. “There are no words to describe it.”

This year will also mark the first time two Saskatchewan squads have been in the mix for the Memorial Cup since 1989, when Swift Current clinched their only national championship in franchise history with a 4-3 overtime win over the host Saskatoon Blades on May 13 — now one of the most important dates in Broncos history.

“It kind of came full circle. Game 6 (against Everett) was on the same day [the 1989 team] won the Memorial Cup so it’s a special day in the Bronco organization now and just to be able to win it at home kind of put the cherry on top,” said Gawdin. “This city has been behind us all season.”

Swift Current’s title also comes just over a month after a catastrophic bus collision took the lives of 13 members of the Saskatchewan Junior Hockey League’s Humboldt Broncos. It’s a situation Swift Current knows all too well, as the team lost four players in a bus crash in 1986. Fittingly enough, the Humboldt Broncos went on to lift the SJHL’s Hanbidge Cup that season.

Nagel says many of the players on this year’s roster in Swift knew players on Humboldt’s bus and dedicated the remainder of their season to the SJHL squad as a result.

“It’s tough to talk about actually. We had a lot of guys who knew a lot of guys on that team, so for them to play through that tragedy is just unbelievable and it just shows their character,” said Nagel. “A lot of guys dedicated their seasons to them, so it’s just amazing that we could go out and get a championship and those guys could do that for their friends.”