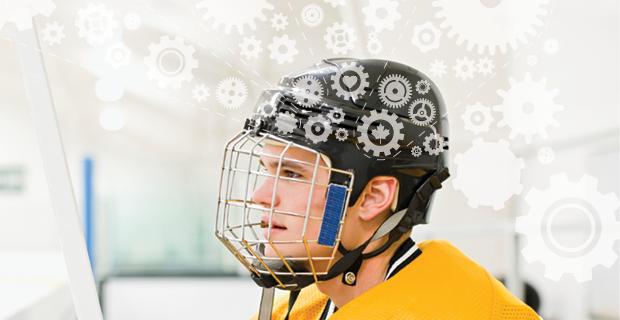 Although athletes are portrayed as emotionally tough, in reality they can be submitted to extremely high pressure and stress, often from an early age. Here, we meet some of the individuals spearheading initiatives to encourage open discussions, provide help, and ultimately de-stigmatize mental illness in sport once and for all.

Captains are expected to make an impact, and Garrett McFadden is trying to do so in more ways than one.

The Guelph Storm captain and last player remaining from Guelph’s 2014 OHL championship team has taken mental health seriously ever since his friend, Wes Cameron, died by suicide five years ago.

Through the program, he visits minor hockey teams in the area to talk about Cameron’s death and his personal struggles on and off the ice, generate mental health awareness and let the youngsters know it’s okay to reach out and speak to someone if they’re feeling down.

“I’ve tried my best to have an impact, whether it was on Bell Let’s Talk Day or anything like that, and try to speak out about how important mental health is,” said McFadden, now in his fourth year with the Storm while studying economics part-time at the University of Guelph.

“Given the opportunity, the chance to branch off and do something on my own with the help of the Storm and (community relations coordinator) Steph Coratti, make my own impact and have my own message is something that sparked a lot of interest right away. Luckily, it’s taking off for me.”

McFadden’s Movement is one of the many hockey-centric mental health initiatives that have popped up since Terry Trafford, then playing with the Saginaw Spirit, committed suicide in 2014.

Any proceeds generated from McFadden’s efforts go towards Guelph’s Canadian Mental Health Association branch and Wes for Youth, which was established by Cameron’s parents as an online counselling site.

McFadden wasn’t sure what to expect before his first group session, but he’s been pleased with how it has turned out so far. 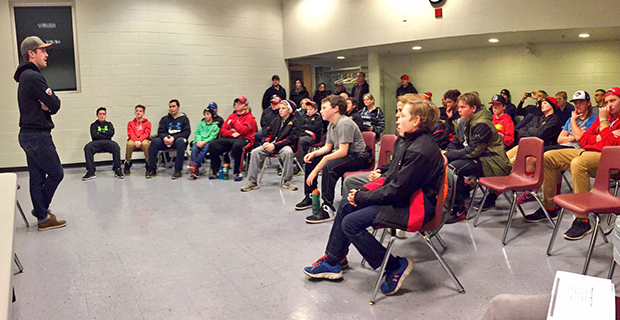 As part of "McFadden's Movement," Guelph Storm captain Garrett McFadden leads group sessions to share his story and encourage players to support each other and seek help when they need it (pictured with Gryphons Minor Bantam AE team). (Submitted photo)

“It can be a pretty touchy subject to talk about and a lot of emotions are running around,” he said.

“I think before each time I talk, there’s a bit of nerves, but once the ice breaks and you see everyone listening and realizing that what I’m saying is having some sort of impact on these kids, it’s a pretty comforting feeling.”

After each visit, teams are encouraged to undertake fundraising efforts, and McFadden added an extra incentive to raise money by offering the highest earning team tickets to Guelph’s Canadian Mental Health Night on Feb. 3.

Not many players enter the OHL at the age of 16, fresh off their minor midget season, but McFadden was one of the few after he was picked 12th overall by the Storm in the 2013 OHL Draft.

He knows the emotions teenagers can go through as they deal with the pressures of balancing school work and playing elite-level hockey, all while often moving away from home for the first time and getting used to life in a new city.

Guelph has struggled the past two years, finishing dead last in the OHL with only 13 wins last season and they’re currently in last place in the Western Conference this year.

For McFadden, looking back on Cameron’s death has helped keep things in perspective through the hard times on the ice.

He’s dedicated to fighting the stigma of high performance athletes being tough and able to keep their emotions to themselves and that doesn’t just involve his chats with minor hockey teams, but also talking with his own teammates if they need someone to reach out to.

“It’s something that has allowed me to get in touch with a lot of guys this year with anything they want to talk about,” McFadden said.

“They know I’m always there to talk to them if they’re ever having any problems. (It’s not just for) kids in the community, but guys on my own team.”

McFadden’s Movement is one of many projects sparked after the introduction of Talk Today, which was launched by the OHL in partnership with the CMHA Ontario in the aftermath of Trafford’s death.

It spread CHL-wide in the spring of 2016 to support all 60 of its teams while it has expanded to Junior A leagues such as the NOJHL and BCHL.

Rob DeClark, an assistant coach and mental performance coach with the Cowichan Capitals, helped bring it to the BCHL just over a year ago after showing the desire to incorporate a mental health support program into the league for several years.

“The idea was to start a pilot project in the BCHL and see if it’s something we could do across the CJHL,” said DeClark, who holds a Masters Degree in social work from Carleton University as well as mental performance certification.

“My sense was I didn’t want a bunch of hockey people talking about mental health and suicide, not really knowing what they were talking about. It was better to partner with CMHA and it made the most sense.”

Each team in a league affiliated with Talk Today has a local CMHA branch with a mental health liaison assigned as well as a “mental health champion,” the first point of contact within the team itself.

American teams may not have a CMHA branch within their market, but they can still arrange for sessions if they coordinate with a trip across the border.

While a lot of teams may use their chaplain as the point of contact within the organization, DeClark has taken on that role for the Capitals given his counselling background, coupled with his familiarity with hockey culture.

CMHA also offers safeTALK (Tell, Ask, Listen and KeepSafe) suicide prevention training not only to players, but coaches, trainers and billets as well.

While Talk Today took a few seasons to expand outside the OHL, the WHL’s Moose Jaw Warriors were quick to earn their safeTALK certification in 2014.

That year, one of their prospects, Ethan Williams, committed suicide and it hit close to home with defenceman Ryan Gardiner since they both played minor hockey with the Winnipeg Thrashers and were drafted by Moose Jaw.

Similar to players trying to hide an injury, it’s typical for them to hide their emotions or mental struggles out of the fear that their coach won’t let them play until they’re healed.

Unless there’s an issue that needs referral to a mental health professional, DeClark says that won’t be the case if players come and speak to him.

While he believes players are more open to talking about mental illness, he feels teams can still be more proactive.

“It’s starting to shift slowly, but my concern at times is it’s not enough just to have a PowerPoint presentation a couple hours a week,” he said.

“That won’t help with the culture at all. You need to ingrain it in the team and in the league and that’s what we’re trying to do.”

The Talk Today program is made up of several components, including mental health and suicide workshops and efforts to create awareness within each community.

As a point of contact, DeClark will be approached about a wide range of subjects, whether it’s players who are trying to get out of a slump or rookies adjusting to a lesser role they had in bantam or midget hockey.

There’s also the typical off-ice problems teenagers face like homesickness, relationship ups and downs or the pressures they face in trying to turn pro or land a university scholarship.

DeClark has seen the parents placing pressure on their kids to perform with the goal of signing with an NCAA program and says it’s practice that needs to change.

“Some parents think that’s the way you help and I would say from my experience that it’s not,” he said.

“The BCHL is very much a scholarship-driven league, so when they look out in warm up and see four or five jackets with logos of Division I schools on it, they need to learn to handle that pressure and try not to do too much.”

Like McFadden, Paul had a close friend take his life when he was in Grade 9 and even now that Paul is playing in the AHL with the Binghamton Senators, the program still benefits the NBRHC.

Points4Paul was relaunched two months ago after a hiatus through the 2015-16 season since Paul was starting out in the Ottawa Senators organization and didn’t want his program to overshadow Binghamton coach Luke Richardson’s efforts with Do It For Daron (DIFD).

Richardson and his wife Stephanie launched DIFD after their daughter Daron ended her life in 2010 at the age of 14.

“I’m all for winning and I’m all for playing at a high level and to the best of your ability, but what we know is that when a player is mentally prepared, they play better,” said Mike Souliere, a mental health and addictions councillor at The Royal who worked along with Nicole Loreto and the Richardsons to help develop the app.

“When you look at any of the top players in junior or the NHL, they seem to be at a different pace and a different mindset. A lot of times, that’s just as much due to their mental preparation as it is physical.”

Be Game Ready follows in the footsteps of the HealthyMinds app, which was also developed by The Royal to help individuals deal with emotions and cope with stress.

The Richardsons wanted to introduce something that was hockey related.

Be Game Ready has many tools to help users pay attention to their mental health, such as a mood wheel that measures how players feel under certain scenarios both pre- and post-game. From there, it suggests an action plan on how to improve behaviours and wellbeing.

The app also offers tips on how to interpret a coach’s actions so players can better handle feedback, plus a resource library where players can get information on exercise, nutrition and the importance of sleep. The app is intended for players between the ages of 10 and 14.

Initiatives like this bring us one step closer to making open discussions on mental health the norm.

“It’s a big stigma we like to talk about,” McFadden said. “We remind these kids that it’s okay to come forward and talk about things that you’re feeling. There are people out there and support systems behind you waiting for you to come forward.”