Sibling Duos No Anomaly in the CHL 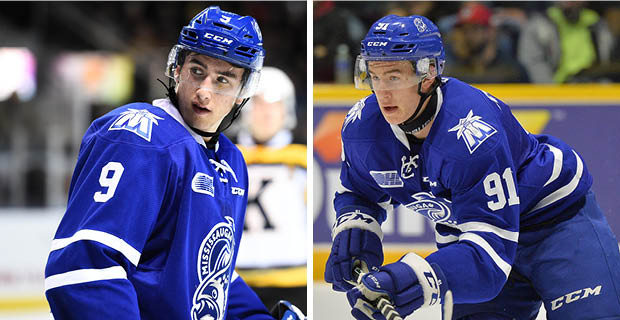 Hockey is a family sport, and over the years there have been too many great sets of brothers to count. Today, each junior league in the CHL has several pairs of brothers in its ranks. To satisfy geographic and logistic concerns, they often end up playing together on the same team.

Back in 2015, when Ryan McLeod was about to be drafted into the OHL, I did a HockeyNow story about the McLeods (Ryan, Matthew and Michael), and the Stromes (Ryan, Matthew and Dylan). What I didn’t know was that Ryan would be drafted to the Mississauga Steelheads, whom his older brother Michael was already a member of.

After a bit of poking around this week, I’ve found that there are many sets of brothers in the CHL that play for the same team. Here are two from each league (and there are more still).

Cal and Nolan Foote, Kelowna Rockets
Yet another example of how hockey aptitude runs in the family, Cal and Nolan Foote are both highly-coveted draft-eligible prospects. Rated eighth overall in 2017 by ISS, Cal is a tough two-way defenceman in the same vein as former NHL great Adam. Meanwhile, Nolan (did Adam name his son after former teammate Owen Nolan?) is a 6-foot-3 left winger with 11 goals in 33 games as a 16-year-old. Expect to see both kids in the NHL at some point.

Reid and Erik Gardiner, Kelowna Rockets
Perhaps the Rockets wanted more of a good thing when they decided to trade for Reid Gardiner at the trade deadline, whose younger brother Erik also plays for the squad. Reid, a former WHL All-Star, had spent the first part of his season with the AHL’s Wilkes-Barre Scranton Penguins. Currently in playoff position, the Rockets acquired him to help the team do some damage in the postseason—and perhaps rub off on his draft-eligible younger brother a bit. Both can play at centre or on the wing.

Ryan and Michael McLeod, Mississauga Steelheads
Ryan and Michael McLeod both grew up in the Toronto Marlboros minor system, but they didn’t play together until the 2015-16 season, after Ryan was drafted by the Steelheads. There isn’t much separating the two of them besides the older Michael’s four extra pounds, and their opposite shooting hands. Both are large, mobile centres who can distribute the puck. You probably saw Michael at this year’s World Junior Championships as the team’s extra forward. He was drafted in the 1st round of the 2016 NHL draft (12th overall) by the New Jersey Devils. Expect Ryan to follow suit in 2018.

Taylor and Darren Raddysh, Erie Otters
Like the Stromes and the McLeods, the Raddysh brothers are one of countless sets of siblings that have come up through the Marlboros system. Although tough defenceman Darren went undrafted, Taylor was taken 58th overall by Tampa Bay at the 2016 NHL draft. They’ve been playing together in Erie since the 2014-15 season, and it’s no coincidence that the team has been especially dominant during that time.  Taylor wowed at the World Junior Championships this year with five goals.

Kelly and Kevin Klima, Chicoutimi Saguenéens
Kelly and Kevin Klima are the only twins on this list, and like Henrik and Daniel Sedin, are at their best when they’re playing together. Sons of former Edmonton Oiler and Stanley Cup Champion Petr, the brothers were drafted into the QMJHL by the Moncton Wildcats, who have since traded them to the Chicoutimi Saguenéens. Although neither of them were drafted in their first year of eligibility, they could play their way into a professional tryout when they exit junior.