Rouyn-Noranda Huskies Vying for Two in a Row 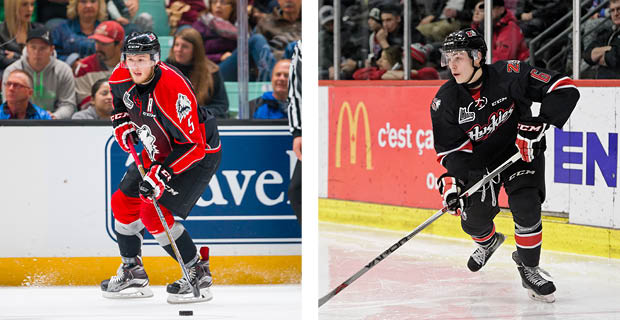 Rouyn-Noranda has one of the best back ends in the Q, led by Jérémy Lauzon (left) and Philippe Myers (right), who are both coming off a trip to the World Junior Championships. (Jean Lapointe photos)

Being crowned the QMJHL playoff champion is never an easy task, defending the title the following season is something that most franchises can only dream about.

The Rouyn-Noranda Huskies can check off winning the QMJHL championship from their need to do list their list when they captured the 2016 President’s Cup last May.

Now the Huskies are faced with an even more difficult chore of doing it all over again this year.

“Last year we had a tremendous season winning the President’s Cup and came as close as you can get to taking home the Memorial Cup,” said Huskies GM and head coach, Gilles Bouchard.

In junior hockey, rosters change from year to year, due to players aging out while others graduate to professional hockey. It’s pretty much the same case in Rouyn-Noranda but the Huskies do have the luxury of 13 returning players and just seven rookies in their line-up.

Last year, Bouchard was named the QMJHL’s top GM and head coach after guiding his team to an impressive (54-9-3-2) record and 113 points. In addition, the CHL recognized all his hard work and team results with the 2016 Brian Kilrea Coach of the Year Award. But Bouchard doesn’t like to rest on his laurels and was eager to talk about his most recent edition of the Huskies and their potential for success.

“We have a solid base of veterans from last year’s squad that provide a ton of experience to our group of first year players which is the primary reason why we’ve had a lot of success so far this season,” Bouchard said.

Winning the big QMJHL prize in back-to-back seasons is not an easy accomplishment but it has occurred more often than you think. Five seasons ago, the Saint John Sea Dogs were finishing up their run at two playoff championships. Before that, the Hull Olympiques captured league honours in 2002-03. The following year, the newly named Gatineau Olympiques brought the President’s Cup back to the National Capital Region.

In the 1990’s no QMJHL team was able to string together a series of wins.

Prior to that, the now defunct Cornwall Royals won back to back titles in 1979-80 and 1980-81. The Royals were the only Ontario-based team playing in the QMJHL after the franchise became one of the inaugural teams of the league in 1969. For the 1981-82 campaign, the team transferred into the OHL and stuck around Cornwall until 1992 when the franchise moved to Newmarket and then to Sarnia in 1994 to become the Sarnia Sting.

Despite some difficult odds, there’s some optimism to believe that Rouyn-Noranda can go back-to-back. The Huskies have been flirting with first place in the QMJHL for most of the season and are a regular in the CHL’s Weekly Top 10 ranked teams. After 56 games, Rouyn-Noranda was sitting in fifth place in the Q’s overall standings with 75 points, leaving them seven back of league-leading Saint John Sea Dogs (82).

Saint John and the Shawinigan Cataractes have already clinched a playoff spot with the Boisbriand-Blainville Armada, Charlottetown Islanders and the Huskies knocking on the door to the postseason.

Rouyn-Noranda has a strong and talented core of 19-year-old players which appear to be hungry to keep the President’s Cup in the Abitibi region of Quebec.

Goaltending has been solid for the Huskies this season with Samuel Harvey who was holding a respectable 2.55 goals-against average along with 24 wins in his pocket.

Rouyn’s back end is very strong, led by the duo of Jérémy Lauzon and Philippe Myers. Both blueliners represented Canada at the World Junior Championships and the experience of playing and defending against the world’s best will be a big bonus for the tandem as the Huskies move forward towards the post season.

Up front, the Huskies are loaded with talent in their top six forwards. RW Jean-Christophe Beaudin leads his squad with (24-45-69 pts.) followed by Antoine Waked and his team-high 33 goals.

Their supporting cast of 2015-16 holdovers is made up of Martins Dzierkals, Gabriel Fontaine, Alexandre Fortin and Peter Abbandonato.

“All the experts said we weren’t supposed to win last year because we had a lot of 17-year-olds, but the team developed, played well in every series and we won,” Bouchard admitted.

Getting to the Memorial Cup is a learning experience for both coach and player. It’s such a short tournament, every shift, every game is so important.

For Bouchard, the 2016 MasterCard Memorial Cup was a real eye opener.

“First of all I was extremely proud that are organization was there. As a coach, I had to handle the pressure of getting my team ready to play against the top teams in Canada.

“In addition, I had a lot of requests by the media and tournament organizers which I had to attend and represent the team in a professional manner. I believe that I am a better coach because of that experience.”

Bouchard and his Huskies did a heck of a job last May representing the QMJHL and provided an excellent final against the London Knights.
And maybe he and his team will be doing it all over again at the 2017 MasterCard Memorial Cup in Windsor, Ontario.